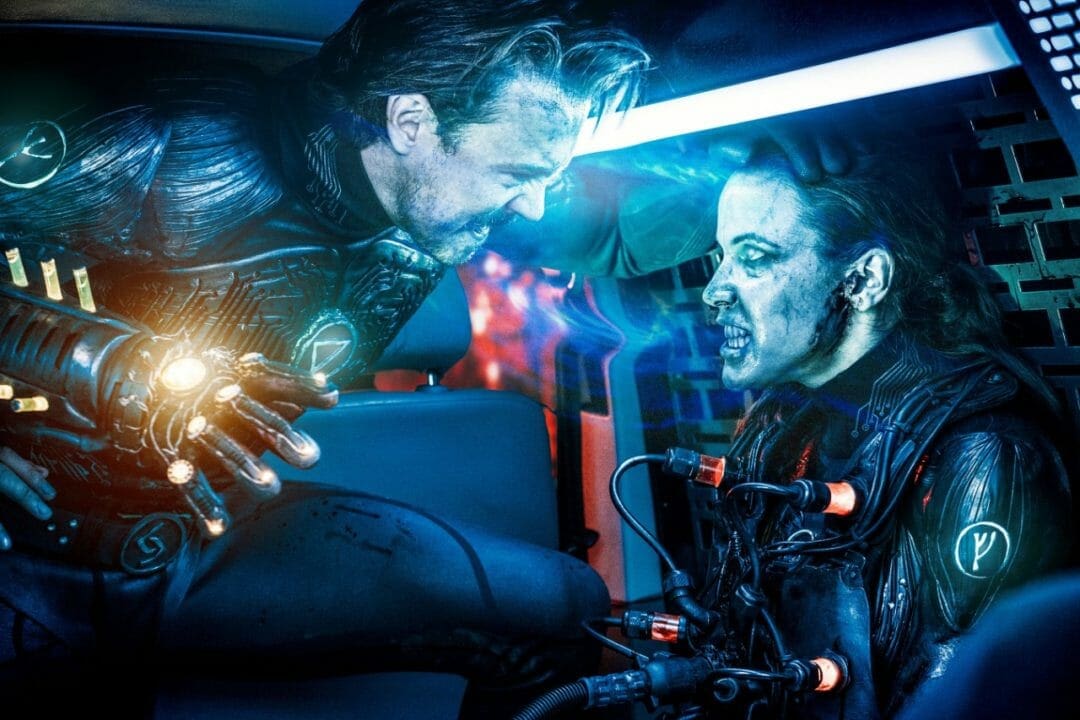 Have you ever wanted a movie that is a hybrid of Ghostbusters, The Matrix, and Hellraiser? Have you ever even conceived of such a combination? Well, now you can with Australian director Kiah Roache-Turner’s (Wyrmwood: Road of the Dead) latest film, Nekrotronic. This all-out gorefest tackles the idea of demons invading the Internet and the few people left on Earth who can stop them. It also is a rather fascinating commentary on everyone’s favorite phone game, Pokemon GO.

Nekrotronic opens with a tone-setting animated sequence that lays out the demonic context. It details thousands of years of bloody struggle between demons and necromancers, whose sole duty is to hunt the evil creatures and protect humanity. However, as the world changed, so did the demons’ strategy. Now, they’ve discovered how to go online and possess people through their phones.

Part of this grand plan is to possess people through a Pokemon-Go-esque game where people can hunt ghosts and wraiths with their phones. This attracts the attention of Rangi (Bob Savea), coworker to Howard (Ben O’Toole), as they drive a truck full of shit (literally). However, through a series of supernatural events, Howard and Rangi get caught in the middle of demonic battle with a family of necromancers: Luther (David Wenham) and his daughters Molly (Caroline Ford) and Torquel (Tess Haubrich). Here, Howard finds out that he is an extremely powerful necromancer that must help foil the evil plan of Finnegan (Monica Belluci), a demon who craves immortality by consuming one million human souls. Howard must learn the trade quickly and get ready to kick some evil-demon ass alongside Torquel and Molly to make sure Finnegan doesn’t get her souls.

I am not sure how this film scored legendary French actress Monica Belluci (Irreversible) as their main villain, but I am so glad they did. Belluci oozes evil sex in every scene, from donning a clear rain jacket to avoid getting covered in blood to sucking the souls right out of a human’s mouth. She saunters on screen in black stiletto heels, pursing her lips, and narrowing her eyes in a way that will make you squirm. She plays a delightful evil demon and I, for one, would love to see her do it more often. Belluci isn’t the only shining star of Nekrotronic. Savea as Howard’s friend and eventual wraith sidekick delivers much of the film’s comedic relief. He is the sidekick character, which could fall into dodgy territory as he is the film’s only person of color. However, he is able to shine with his own action-filled moments and quite often steals his scenes. Another standout is Tess Haubrich as Torquel, the punky younger sister who is willing to risk everything to save the world. She undergoes a transformation towards the end of the film and this is really where Haubrich steals the show. She channels the typical super-serious action hero, but in a way that leans into the camp of Nekrotronic. Don’t worry, this film never takes itself too seriously.

Speaking of not taking itself too seriously, let’s talk about the gore. Oh, is there gore. Demons pop human heads like they’re pimples. Necromancers blast demons apart with no regrets. Demons ooze all different kinds of fluids. This film is, to put it bluntly, wet. You will find yourself groaning and yelling in glee with each kill; there is never a dull moment in Nekrotronic. From the film’s opening minutes, it seems like Nekrotronic will lean heavily into borderline cringe humor to appeal to a young male audience who fall for fart jokes, poop gags, and everything gross-out. Its first live-action moments do involve our hero getting covered in literal poop as he empties a septic tank. These sequences gave me pause, reminding me of the videos I used to watch on FunnyJunk.com.. which is not a good thing. But, despite a rather childish opening, the film moves away from the immature humor to something a little grown-up without losing its comedic moments. There are still a few penis jokes peppered throughout, but they can be forgiven.

Now, I mentioned this is a combination of Ghostbusters, The Matrix, and Hellraiser. Most obviously, Howard, Molly, and Torquel form a group of demon hunters who use giant DIY guns to capture, contain, and eliminate the hell creatures, not unlike the iconic Ghostbusters. But, the devices used in Nekrotronic look just like the puzzle boxes from Hellraiser. Then, our necromancers can be wired into the Internet to use their souls as digital weapons. Demons can also pass into human hosts via phone. Despite these three pillars of inspiration, Nekrotronic creates its own absolutely strange, unique, and extremely entertaining film that begs to be seen in a theatre, or at least with a group of friends. It won’t be for everyone, but it is the perfect film for those who love campy horror films that lean into the ridiculous and creative.

Nekrotronic comes to digital and VOD August 9th. Does this movie sound up your alley?  Let us know your thoughts on Twitter, Instagram, Reddit, and in the Horror Fiends of Nightmare on Film Street Facebook group! And let us know what you think of it once it’s released! TLDR Nekrotronic creates its own absolutely strange, unique, and extremely entertaining film that begs to be seen in a theatre, or at least with a group of friends. It won’t be for everyone, but it is the perfect film for those who love campy horror films that lean into the ridiculous and creative.