[Review] We All Scream for Ice Cream in Mutant Film FREAKS 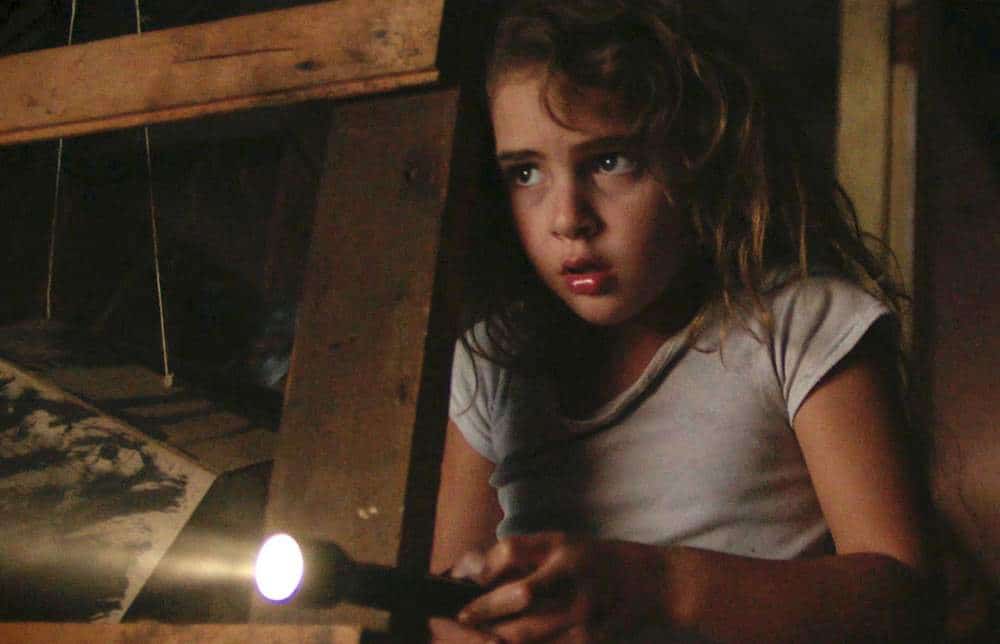 It all starts with a little girl wanting a chocolate ice cream cone and ends with a showdown of epic proportions. Like an X-Men film but with more heart, Adam Stein and Zach Lipovsky’s film Freaks offers a new look at the mutant-humans-fighting-for-rights genre that focuses on emotional beats to make you truly care about its characters.

Chloe (Lexy Kolker, A.G.E.N.T.S. of Shield) is a young girl who lives an extremely sheltered life. She is not allowed to leave her house under the strict direction of her father, just known as Dad (Emilie Hirsch, Once Upon A Time… In Hollywood). Their house is falling apart, covered in grime and trash, an image of destitution. Dad looks like a man unhinged with his scraggly beard and stained white shirts, while Chloe’s tangled hair and dirty pajamas make her look like a wild child. Something seems off: is Chloe really Dad’s child? Is he mentally ill? Chloe gets more and more curious about the outside world after Mr. Snowcone’s (Bruce Dern, Once Upon A Time… In Hollywood) ice cream truck appears outside. All she wants is an ice cream cone, like any little kid. So when she eventually wanders outside, she gets that ice cream but her world is completely changed.

She discovers that Mr. Snowcone is her grandfather and the dad of her missing mom, Mary (Amanda Crew, Final Destination 3). He reveals to Chloe that she is one of a small population that have superhuman abilities—specifically she is able to transport her mind to other places in a form of telekinesis. However, those with powers are treated like monsters, hunted by “normal” people and used for medical experiments. Dad has been hiding her using his time-stopping powers to protect her from the horrors of the world. But now Chloe knows the truth and wants to help find her mother who has been captured by the government. It is a story about what we pass down to our families and the power of love, set to the tune of sci-fi oppression. While Freaks could easily become derivative of the X-Men franchise, Stein and Lipovsky make a much more emotional piece of “superhero” fiction by focusing on the world through the eyes of a child. We are not following groups of flashy adults covered in fancy costumes who have a deep understanding of their powers. We are also not following a weathered and jaded old mutant who is angry with the world. Instead, we are following a young girl who is trying to comprehend the world around her. At first, that world seems horrifying. It is tightly controlled by a seemingly aggressive father figure; she is given no agency in her small life. Dad really loves her and wants to protect her, but he does it in a way that makes no sense to Chloe, or the audience for that matter. And that is frustrating for a young girl; it is hard to comprehend a father’s love especially in such extreme circumstances. Stein and Lipovsky truly channel that frustration to make the first act of Freaks feel like a horror movie.

Then, they flip the tone into something more fantastical and thrilling: the world of superhuman abilities. There are exhilarating battles and big set pieces, but those aren’t the most enthralling parts of the film. Instead, Stein and Lipovsky center the best conflicts around family fights, putting the emphasis on the role of family in Freaks. Arguments between Hirsch and Dern about how to use their powers feel like any fight between in-laws at a holiday party. The dialogue is able to combine the fantastical with the realistic to create a superhero-adjacent movie that earns its emotional investment. At the core of this emotional investment are the performances by Kolker as Chloe and Dern as Mr. Snowcone. Kolker is in almost every frame of Freaks, which is daunting for an eight-year-old actor. However, she is all in all the time. She is so convincing as the confused Chloe, as if she really is living in this dystopian world. It is one of the most impressive child performances I’ve seen in recent years and she deserves so much recognition for her ability as a performer. The young actor is paired with the legendary Dern, who at the age of 83 throws himself into the role of a tired and angry person with powers. The two have such strong chemistry, emulating the real relationship of a grandfather and grandchild, despite the short time that the characters know each other. Their relationship is so convincing and a crucial part to Freaks’ emotional impact.

“In a world saturated with superheroes, Freaks is a breath of fresh air.”

In a world saturated with superheroes, Freaks is a breath of fresh air. It uses superhero abilities to craft an emotional story about processing trauma and the world through the eyes of a child. Sci-fi action may draw you in, but it’s the emotional storytelling that sets Freaks apart. Kolker and Dern deliver strong performances that make you want to call your grandparents when you leave the theatre. Sometimes, all you need is a craving for chocolate ice cream to completely change the world.

Freaks is now out in select theaters in the U.S. and Canada. Let us know what you think of Freaks on Twitter, Reddit, and Facebook in the Horror Movie Fiend Club!

TLDR In a world saturated with superheroes, Freaks is a breath of fresh air. It uses superhero abilities to craft an emotional story about processing trauma and the world through the eyes of a child.