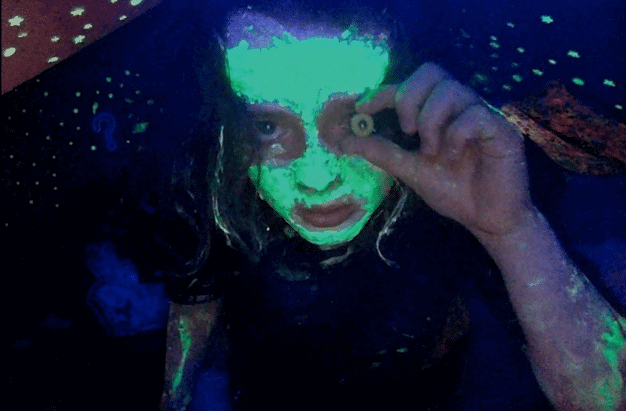 Jane Schoenbrun’s We’re All Going To The World’s Fair is exactly the kind of horror movie you hope for when you’re stuck at home with nothing but an internet connection to entertain you. As everything everywhere is right now, the 2021 Sundance film festival has pivoted to a (mostly) virtual experience this year. Normally, a dark theatre with big sound and a big screen is the exact environment you want to submerge yourself into a story, but some stories are better suited for those quiet, lonely nights at home. The campfire may be gone but there still exists a place where we tell each other scary stories with only the glow of our laptop screen lighting the darkness around us.

Some might have a hard time calling it a “horror movie” but We’re All Going To The World’s Fair distills those haunting, unanswered questions we all experience trolling the internet for obscurities. The film is comprised, in large part, of YouTube-esque video clips that slowly build a rabbit hole for you to fall down into. And to its credit, I very nearly stayed up all night “researching” other internet-based phenomena. In a lot of ways, this movie is like The Blair Witch Project for the creepypasta crowd. I don’t believe it ever quite reaches those heights but it is undeniable that the film is its most haunting in its quietest, most stripped-down moments. Its re-creation of internet rabbit holing feels true to life, maybe to a fault because real life has a tendency to crawl by at a real slow pace.

“…The Blair Witch Project for the creepypasta crowd.”

Casey documents her progress through her vlog, uploading new videos as often as possible to highlight the feeling of this gradual metamorphosis. When she’s not uploading videos, she watches other vloggers documenting their journey. It’s hard to tell from the clips how genuine these other participants are in their video diaries but one user is deadly serious about Casey’s transformation. He goes only by JLB (Michael J. Rogers), and he never appears on camera when talking to Casey, but he is incredibly worried about her and the dangers of the World’s Fair challenge. The two strike up a relationship based on dread over her slow-developing condition, with JLB urging Casey to keep uploading more videos so he knows that she is still ok. Is Casey simply taking an internet-based role-playing game too seriously? Is JLB feeding her obsession, pushing her deeper and deeper into a dangerous headspace? Is Casey about to transform into something wholly unimaginable through the power of the mysterious World’s Fair?

“We’re All Going To The World’s Fair is about that little voice in your head that wants so badly to believe in something impossible.”

Like the feeling you’re left with after finding something freaky on the internet, it’s all the unanswered questions in We’re All Going To The World’s Fair that haunt you. It also perfectly recreates that rabbit hole experience of consuming video after video (complete with buffering!) late into the night. And maybe it’s the grown-ass adult in me talking but no creepypasta is ever going to hold a candle to that stomach-turning feeling that you might be having a conversation with a genuine creep online. The anonymity of the internet has given everyone sheep’s clothing to hide in, but sometimes it’s hard to know the difference between a genuine wolf out on the hunt and someone howling through their keyboard, desperate for human connection. We simply don’t know who we’re talking to at any given moment and that is either incredibly freeing or super terrifying.

We’re All Going To The World’s Fair is about that little voice in your head that wants so badly to believe in something impossible. Urban legends like Bloody Mary have lived with us for a long time but they seem to have a particular resonance in the internet age. Momo, Slenderman (heck! even simulation theory) are just a small sampling of “crazy internet stuff” that a small piece of us wants to believe is real. More than that though, it’s a story about the lengths lonely, isolated people will go to make connections. It’s a much sadder story than a scary one but that doesn’t mean it’s without its spooks. Its screen-horror approach to presenting the story Casey and JLB are building together feels like it should be marked for evidence but its true horror lives in that very IRL feeling of accepting that you may never know whether a random person you saw once on the internet found the help they needed. And that’s a feeling that really sits with you.

Jane Schoenbrun’s We’re All Going To The World’s Fair celebrated its World Premiere January 31, 2021 as part of the 2021 Sundance Film Festival. Click HERE to follow our full coverage of the festival and be sure to let us know if you’re brave enough to take the World’s Fair challenge over on Twitter, Reddit, Facebook, and in the official Nightmare on Film Street Discord. Not a social media fan? Get more horror delivered straight to your inbox by joining the Neighbourhood Watch Newsletter.

Review: WE'RE ALL GOING TO THE WORLD'S FAIR