There was a time when people lived their lives according to fables, myths, and superstitions. Modern science has almost universally replaced the folklore of yesteryear, but there are those who insist we never forget its importance even in today’s world. If not for the sake of preserving culture, fairy tales and other fantastical stories teach us morals — they tell us the difference between right and wrong.

Had they heeded their own local folktale, perhaps the family at the center of the movie The Feast could have avoided what’s to come one fateful night. Lee Haven Jones, whose career is largely based in directing television serials like Doctor Who, makes an impression with his debut film. This Welsh-language folk horror, originally titled Gwledd, focuses on a wealthy and dysfunctional family living in the mountains far away from the nearest town. They are in the midst of putting together a small dinner party for the father’s potential business partner when the matriarch’s hired help finally shows up. The supper is not without its more innocuous hiccups, but the greatest problem faced that evening is truly the mysterious woman whose mere presence invites doom for her oblivious employers.

Early on, a bloodied man dies of unexplained causes after collapsing near the oil drill he was manning all by himself. Meanwhile, the film’s central characters are tucked away in their luxurious home, none the wiser of what has happened at the site. Each member of this disconnected family is wrapped up in some leisure or chore that wholly describes their personality. The pretentious matriarch Glenda (Nia Roberts) is scrambling to prep the ill-fated dinner on her own until help arrives. Son Gweirydd (Sion Alun Davies) is too busy with training for a marathon his father no longer wants to foot the bill for, and his brother Guto (Stefan Cennydd), who is struggling with addiction, is longing to return to London while sneaking drugs around the house. The father and breadwinner, Gwyn (Julian Lewis Jones), is out in the nearby fields hunting for his next trophy and that night’s main course — rabbits.

Lone server Cadi (Annes Elwy) belatedly shows up, drenched and out of sorts. Nevertheless, Glenda sets her grievance aside and puts the aloof and rather peculiar young woman to work because her sons are certainly not going to help her pull off this three-course meal. The guest of honor is, after all, a corrupt developer named Euros (Rhodri Meillir) who Gwyn is hoping to woo with his wife’s sumptuous cuisine. Also attending the dinner is the family’s neighbor, the farmer Mair (Lisa Palfrey) whose mere presence is the antithesis of all the unethical business dealings going on. 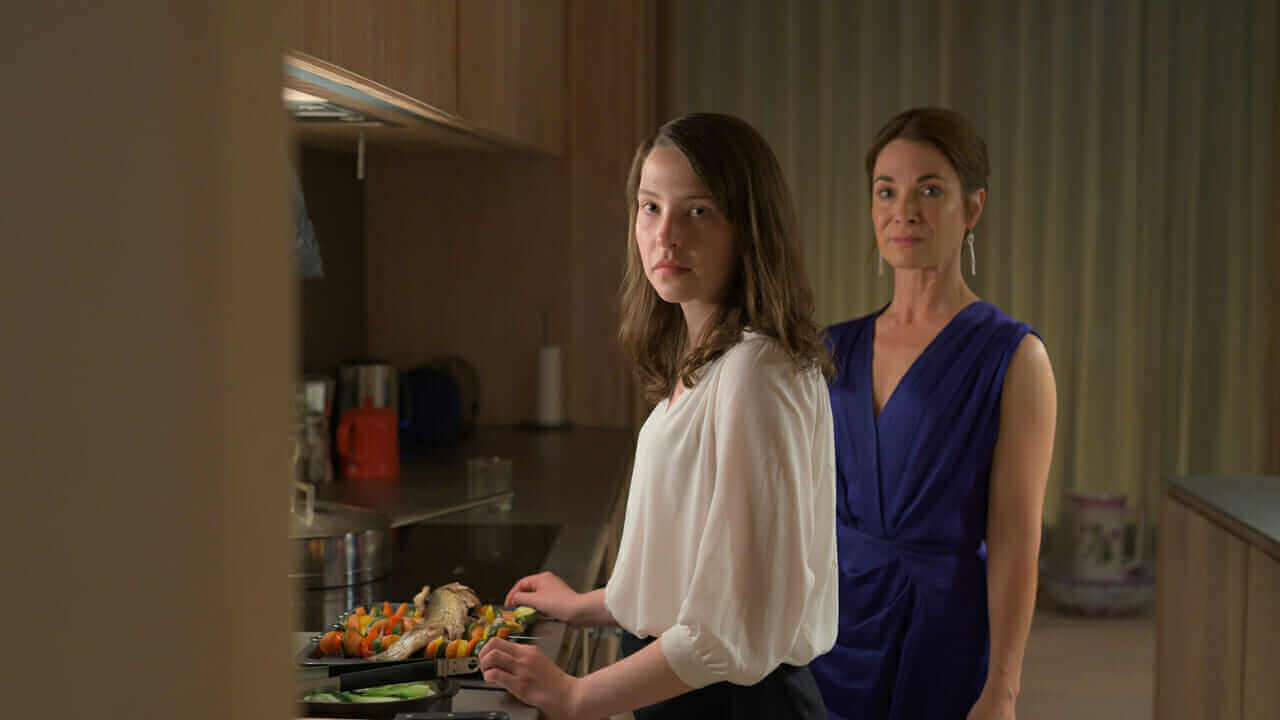 Glenda’s menu is a success despite some small issues like, say, Cadi privately vomiting into one of the dishes and then serving it. Even so, Euros is clearly enjoying himself as he gorges on each offering and then some. The sons are stirring up drama unique to their characters and reflective of their fixations. In the meantime, Cadi‘s ominous behavior remains undetected until it’s all too late.

This distinguished launch of Jones’ transition to features is enhanced by Bjørn Ståle Bratberg’s ritzy cinematography. His attention to both position and framing brings life to an otherwise sterile and overly formal setting. When it comes time for the unavoidable mayhem, Bratberg doesn’t let the ugliness of death mar his eye for beauty, finding just as much elegance in bloodied hunks of flesh as he does in the scenic surroundings. 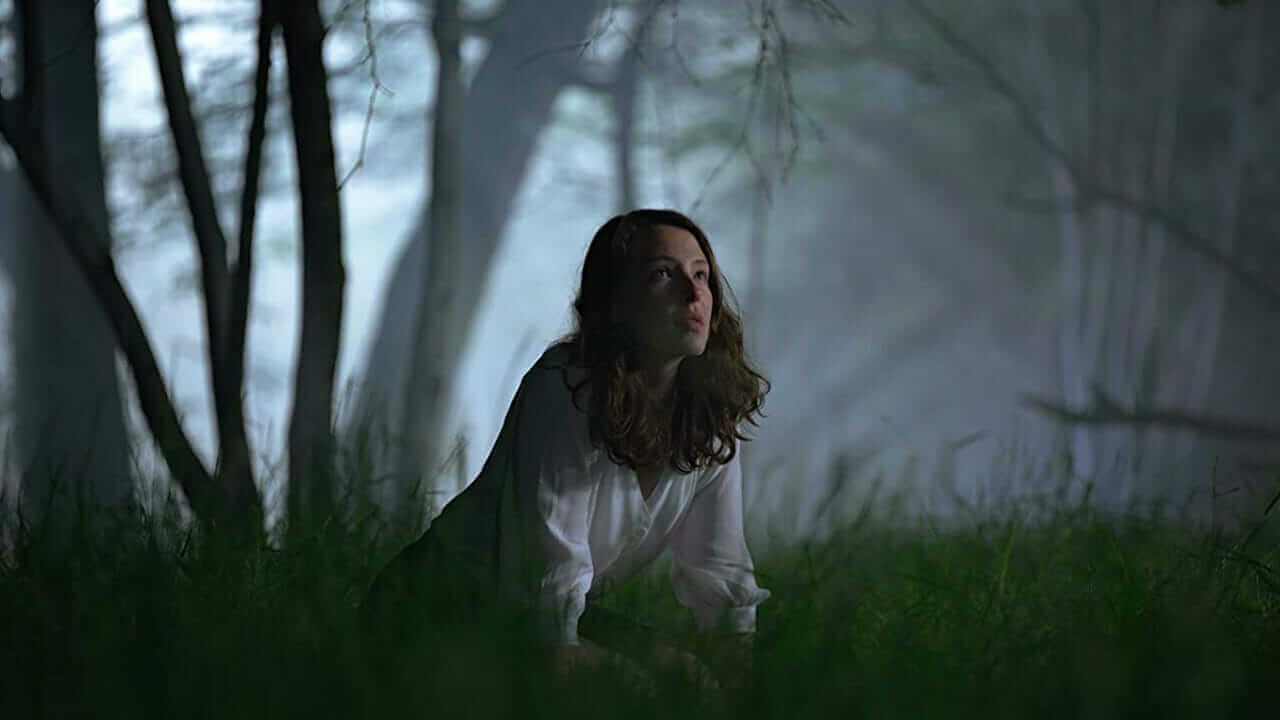 Without its decadent death imagery and artful displays of grisliness, The Feast would just be a straightforward narrative about good and evil. The overarching story is occupied by one-note and quite unpleasant characters, but their innate lousiness doesn’t forgo the chance of amusement at their expense. On the other hand, discussion of the disciplining lore of the land — an area known as “The Rise” which Gwyn and Glenda disturb all because of their own avarice — is squeezed in. Although passing yet crucial conversation gives us the gist, more attention to the regional mythology instead of the film’s broken nuclear family wouldn’t have hurt.

Reaching the main course of The Feast requires patience. Roger Williams’ story is a meticulous moral play concerning greed and wanton destruction of nature, but attractive filmmaking makes those themes digestible. Anyone in need of an alluring and very contemporary helping of environmentally-conscious folk horror, will surely eat this movie up.

“Without its decadent death imagery and artful displays of grisliness, The Feast would just be a straightforward narrative about good and evil.”

Lee Haven Jones’ The Feast premiered at the 2021 SXSW Film Festival. Click HERE to follow our full coverage of the festival and be sure to let us know if you’re excited to check out this descent into cosmic madness over on Twitter, Reddit, Facebook, and in the official Nightmare on Film Street Discord. Not a social media fan? Get more horror delivered straight to your inbox by joining the Neighbourhood Watch Newsletter.

TLDR Without its decadent death imagery and artful displays of grisliness, The Feast would just be a straightforward narrative about good and evil. The overarching story is occupied by one-note and quite unpleasant characters, but their innate lousiness doesn't forgo the chance of amusement at their expense. This distinguished launch of Jones' transition to features is enhanced by Bjørn Ståle Bratberg's ritzy cinematography. His attention to both position and framing brings life to an otherwise sterile and overly formal setting. Roger Williams' story is a meticulous moral play concerning greed and human's wanton destruction of nature, but attractive filmmaking makes those themes digestible. Anyone in need of an alluring and very contemporary helping of environmentally-conscious folk horror, will surely eat this movie up.