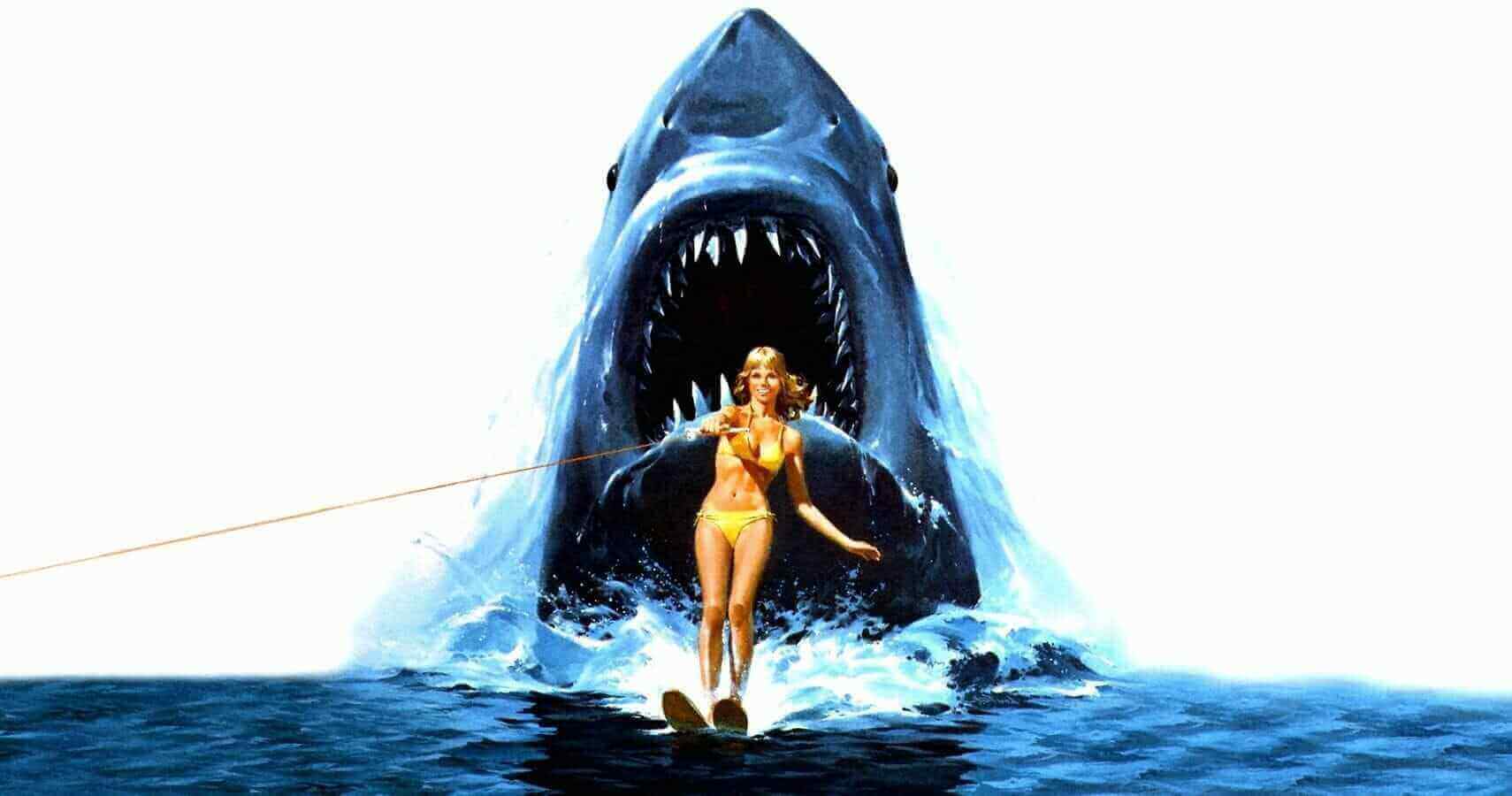 [The Nostalgia Pit] How JAWS 2 Upped The Ante, Raised The Stakes, and Chummed The Waters of A Legendary Blockbuster

Welcome back to the Nostalgia Pit, your monthly trip down memory lane where we celebrate monsters, masked killers, and creative kills! Last month, we visited Juan Piquer Simón’s Grindhouse and B-Grade masterpiece Pieces. A staple in the cult film community. Today, however, we’re revisiting a film that will make you want to get back out of the water, and back on the warm sand where it’s safe- and that film is Jaws 2.

As far as sequels go, the horror community is a lot more forgiving than most. We can accept horror sequels that may negate everything that came previously, and ridiculous plot points that add nothing to the story. That said, Jaws 2 is a rare breed. It re-treads old territory but maintains a fresh and entertaining perspective. Jaws 2 is a film that takes you on a high octane ride with a shark who kills water skiers, kids on sailboats, and a helicopter pilot… while he is in the helicopter.

“a shark [kills] a helicopter pilot… while he is in the helicopter.”

After the success of Jaws in 1975, it was only natural that Universal Studios was in talks to produce a sequel. They discussed many ideas on how to approach the story for Jaws 2. Howard Sackler, who was an uncredited writer on the first film, wrote a treatment for the proposed sequel. His idea revolved around the infamous USS Indianapolis speech from Jaws. While this idea intrigued the studio, they chose the safe route to revisit Chief Brody (Roy Scheider) and his family on Amity Island.

A few years have passed, and Amity Island appears to be free of all shark-related issues. Until a shark comes into their neighborhood and attacks a couple of scuba divers and a water skier, of course. Chief Brody’s suspicions and worst fears are realized when a killer whale washes up on their shores with a sizeable chunk taken out of it. In this moment, we see what is at stake for Chief Brody regarding his duty and obligations to the town of Amity. As well as the danger his children could potentially be in if they go back into the water.

Jaws 2 is a damn fine sequel and what makes it so is that the structure is so different from the original film. In Jaws, we saw the shark stalk its victims. Steven Spielberg took his time to unfold a masterful and intense story, and it has terrified audiences for generations. Jaws 2 director Jeannot Szwarc decided to show the shark a lot, and really make it the true star of the film. However, the similarity between the two films is the fact Chief Brody is very much the glue that holds the films together. He is the connection between the shark and the citizens of Amity Island. Sure, the story and objectives are a little different to its predecessor, but the core of the original story is very much alive in Jaws 2.

Chief Brody is the anchor that grounds this story. However, this time around we also see how the events of Amity Island are affecting the youth. Mike Brody (Mark Gruner) along with all his pals enjoy sailing, and it’s all they do for the majority of the summer. Despite a deathly overcast on Amity Island, these sailing fanatics go out on the water, anyway. Even though a lot of the cast are teenagers, there is at least one character you can identify with, and that is part of the appeal of Jaws 2. Sure, it is more fast-paced, but you are given moments to enjoy the characters as well as empathize with them. Unless it’s Jackie (Donna Wilkes). Her acting ability comes second to her ability to burst anyone’s eardrums with blood-curdling yet exceptionally annoying screams. What can one say about the kills? They are so much fun to watch. Since director Jeannot Szwarc decided it was wise to show a lot more of the shark in Jaws 2, there were so many more places the film could take us. The death of water skier Terri (Christine Freeman) and her gal pal (Jean Coulter) driving the ski boat is the best three minutes you will see in this film. Pure adrenaline fuels that entire scene. All tied up with a neat little bow, in the form of a ski boat explosion.

The violence is in no way more gratuitous than the original, but there is a particular kill that really toes the line, and that is of poor, sweet Marge ( Martha Swatek). As she saves Sean Brody (Marc Gilpin), Marge struggles to get back on the boat in time, and unfortunately, our carnivorous leviathan engulfs her in one mouthful. The one thing you can say about Jaws 2 is that the death scenes have such a strong impact, you don’t easily forget them. When it comes to sequels, there is always so much expectation to do better than the original, which can be nearly impossible. The issue with trying to replicate a film is that you cannot extract that same feeling an audience had the first time around. But as a filmmaker, you can take the core of what made a pre-existing film great and take it in a direction that is just far enough away from its predecessor, but not so far that it has ‘jumped the shark’. Trying to find that balance is the hardest part, but Schwarz pulled it off.

Schwarz managed to meld horror, thriller, and action yet his film doesn’t lose sight of what the heart of the story is. Jaws 2 may not have the same tension and build-up to a climactic scene as the original, however, the pacing is perfect, and each scene is incredibly engaging. It’s a strong sequel without a doubt, but because there is so much self-awareness on Schwarz’s part regarding the difference between his and Spielberg’s film, it works even better as a stand-alone film and isn’t regurgitating pivotal moments that we have already seen. Jaws may always be regarded as the greatest shark movie of all time, but there is no denying the achievement and the sharp-toothed creativity of Jeannot Szwarc’s Jaws 2.

“The one thing you can say about Jaws 2 is that the death scenes have such a strong impact, you don’t easily forget them.”

Do you remember the first time you watched Jaws 2? Share your thoughts on this infamous sequel with us over on Twitter, Reddit, Facebook, and in the official Nightmare on Film Street Discord. Not a social media fan? Get more horror delivered straight to your inbox by joining the Neighbourhood Watch Newsletter.