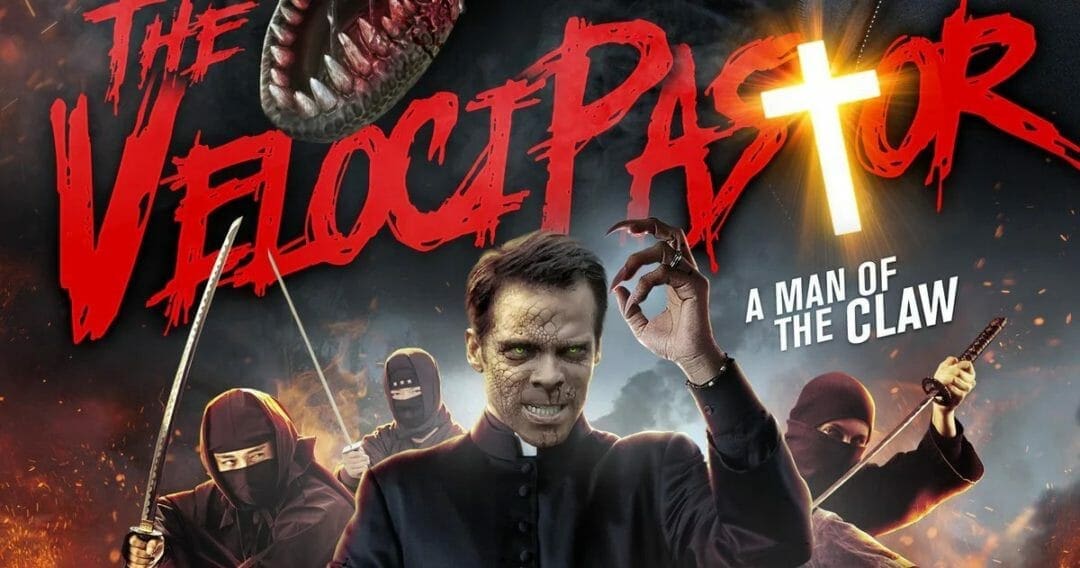 The VelociPastor took the Internet by storm with the release of its trailer and poster, promising a prehistoric romp of the likes we’ve never seen. It is exactly what you’d expect from the trailer: a ridiculously-terrible B-movie reminiscent of Sharknado and Birdemic. I laughed, I groaned, I laughed some more. The VelociPastor proves itself as the next big joke movie that you need to show all of your friends.

Doug Jones (Greg Cohan) is our VelociPastor, but he begins as naive pastor who preaches in a small church and loves his parents. However, his parents are killed in a car explosion—which is depicted not through a fiery spectacle, but the words “SFX of fire” popping up on screen—and sends him into a grief-fueled spiral. So, he does what any white man does when he’s upset: goes to Asia to find himself.

Specifically, he goes to China, which is actually just the same woods we see throughout the film, but giant yellow letters tell us it’s China—suspension of disbelief is key in The VelociPastor. As he hikes through the woods, he finds an injured woman who hands him an ancient dragon tooth, explaining that he can’t let it get into the wrong hands. She then dies, ninjas appear in the trees, and Doug cuts open his hand with the tooth. Like a bite from a radioactive spider, this cut bestows prehistoric powers to Doug and he has become the VelociPastor.

He now must use his powers to fight evil ninjas who want to steal the claw back. He also uses his powers to avenge the deaths of his parents at the hands of a pimp named Frankie Mermaid (Fernando Pacheco De Castro). The death of Mermaid frees sex worker Carol (Alyssa Kempinski), who is just trying to pay her way through college. Of course a romance is born between her and Doug—he’s not so holy anymore. Together, they work to fight crime and bring peace back to their sleepy town.

The VelociPastor is truly a piece of ridiculous schlocky horror cinema. The acting is over-the-top and cheesy. The dialogue made me roll my eyes so hard, it hurt. The special effects are nonexistent. In other words, it’s perfect. It’s exactly what you want and expect from such a film. Cohan shines as a overly-serious hero, who in his excessive seriousness embodies the role of the perfect B-movie protagonist.

“The acting is over-the-top and cheesy. The dialogue made me roll my eyes so hard, it hurt. The special effects are nonexistent. In other words, it’s perfect.”

The film is self aware and doesn’t take itself seriously, leaning into the power of corny; director and writer Brendan Steere knew exactly what he was doing with The VelociPastor. Steere’s script echoes straight-to-video releases and its low-budget aesthetic only adds to that vibe. A rendition of the Jurassic Park theme song even quietly plays at one point, Some on Twitter were worried that The VelociPastor was trying too hard, but it tries just hard enough.

My one gripe with The VelociPastor is that there really is not enough dino action. It’s most likely due to budget constraints, but in a movie about a pastor who becomes a velociraptor, I want more velociraptor. Sure, a clawed arm bursts through a confessional booth or two, slashing open a throat, and I won’t deny that magnificence. However, don’t let the poster lure you into a false sense of dino-excitement because there is not even a whiff of that kind of digital execution. The only full dinosaur body shot we see is of a man in an inflatable dino costume massacring ninjas. While it does fit into the already-established aesthetic of the film, it’s a little disappointing that we don’t at least get a horrible CGI dinosaur a-la Birdemic. There are some phenomenal transformation sequences, though, where Doug’s teeth become dino teeth and his eyes become reptilian. It’s no An American Werewolf in London, but it’s blazing new trails for dinosaur transformations (please, someone, make another film like this).

If you love schlocky films that are made for the laughs and enjoyment of the audience, rather than focusing on scares and narrative, then The VelociPastor is perfect for you. Nothing in this film makes sense, but it really shouldn’t. If this movie made any coherent sense, it wouldn’t be as fun. Why is there a camp of ninjas in the woods? Don’t worry about it. An ancient dragon tooth that turns you in a dinosaur? Don’t worry about it. Just sit back, crack open a beer, and enjoy The VelociPastor.

Share your B-Movie horror love with the Nightmare on Film Street community over on Twitter, our official Subreddit, and the Horror Movie Fiend Club on Facebook! 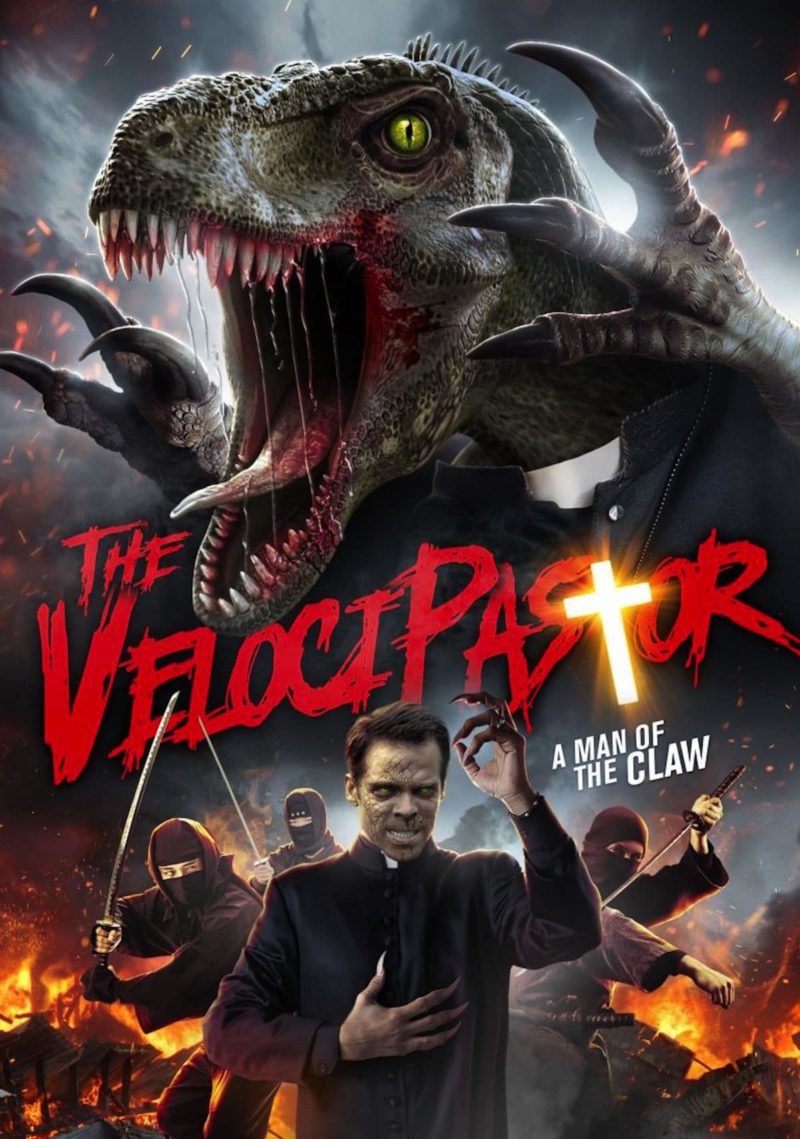 TLDR: 'The VelociPastor' took the Internet by storm with the release of its trailer and poster, promising a prehistoric romp of the likes we’ve never seen. It is exactly what you’d expect from the trailer: a ridiculously-terrible B-movie reminiscent of Sharknado and Birdemic. I laughed, I groaned, I laughed some more. The VelociPastor proves itself as the next big joke movie that you need to show all of your friends.