Everyone enjoys a good story of comeuppance. An audience can’t help but feel a sincere sense of jubilance when a monster pays his dues in the end Sometimes when bad behavior is normalized, it takes a group of individuals to overcome a massive stigma inflicted on them by the one in power in order to fulfill the agenda of retribution. Just ask Caesar about The Ides of March. Director James Roday (A Million Little Things) and a crew of talented women modernize the epic tale of vengeance and retribution in the latest episode of Blumhouse’s Into The Dark holiday anthology series, Treehouse.

I was given the extreme honor of discussing the Hulu exclusive with producer and actress Julianna Guill (Friday The 13th) along with Roday to further dissect their motives in creating a story so deeply crafted within the important social issues we face today. Provided with inspiring commentary and some truly thoughtful expression through relatable characters and situations, Roday and Guill have brought power to women in film and in everyday life as we know it. Treehouse intertwines the associated retribution with The Ides of March to the profound, deserving movement of International Women’s Day to make the month of March one for the witches’ taking.

Jessica Rose for Nightmare on Film Street: I have been following Into The Dark and I was excited for this one because I really didn’t know what to expect from it.. I was really surprised by the outcome of the story. I enjoyed Treehouse so much. Blumhouse is like a media juggernaut for us horror fans. They’re the place to go. For both of you, how did you guys get involved in this project?

Julianna Guill: Go for it, James.

James Roday: Yeah. It was it was pretty crazy and serendipitous. I was working on a TV pilot up in Vancouver and Blumhouse called – specifically Sahar Vahedi called – and said “Hey we’re doing this anthology. We have a couple of months open. Do you think you have anything that would slide in March, June, or July?”. Julianna and I had been kicking around an idea for years that very much could slide into March for International Women’s Day which was sort of how we framed it. Then I just kind of soft pitched the idea to Sahar on the phone, even though we didn’t have an ending. In about 48 hours later she was like, “Okay, you guys are good. You’re making a movie. You should probably get to work”. That’s pretty much how it came together, it was insane.

JG: We went right in to prep, then we were on set about six weeks later.

NOFS: ..It’s almost serendipitous the way it kind of worked out for the Ides of March and International Women’s Day, with all of the film’s social commentary. It’s got some pretty heavy material. Can you maybe speak to your approach, like how you wanted to tackle that? How much you wanted to be obvious in what Treehouse is about, maybe how much you wanted to use as a kind of subtext.

JR: Sure. For me it was twofold. One: We still have to make a cool horror flick and we’ve got to keep people on the hook. We’ve got to keep people guessing the way that a good horror film does. Two: We have something that we want to say about an incredibly relevant social issue. What is that message? How do we want to say that message? For that I leaned a lot on Julianna and the other ladies that were involved behind the scenes as well because this movie was essentially designed by women. I let Julianna kind of guide-track the messaging. I think it worked out pretty well. I think we were very pleased with our concoction. 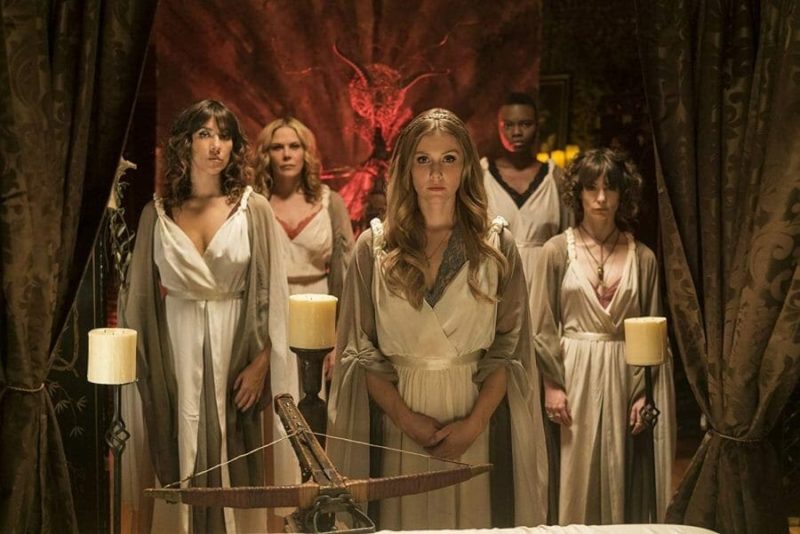 NOFS: You definitely should be – I was going to ask Julianna: As an actress, as a woman, as a producer, how did you prepare for this role that you took on as both being in it and then being behind the scenes as well?

JG: Absolutely. It was really just such an incredible experience for me on so many fronts, because not only was it my first time getting to produce a feature film, but it was also really my first time back to work after having my first child. So, on the female level it was all the things for me and to be able to be able to do it surrounded by such an incredible group of women, it was really special. That was so much in part James’ commitment to make sure we got the right people to head all of these departments. And that happened in being just a really special group of very, very talented women. And, coming together around this message was an exciting experience for all of us – because as this conversation becomes bigger and more people participate in-and-around this particular social issue, we’re just really grateful to be a small part of it and to get to shed some light on it.

NOFS: That’s great. I love the collaboration and having women behind the scenes working..

JR: Well, I gotta say, it was really easy to put together a group of incredibly talented ladies. I mean if there’s an even bigger headline here it’s like “Hey, guess what? It’s not hard to populate a set with women who are all really good at their jobs”. So the fact that the toughest choices that we had to make were actually because there were too many too many great choices and not enough jobs is a message needs to get out there too. 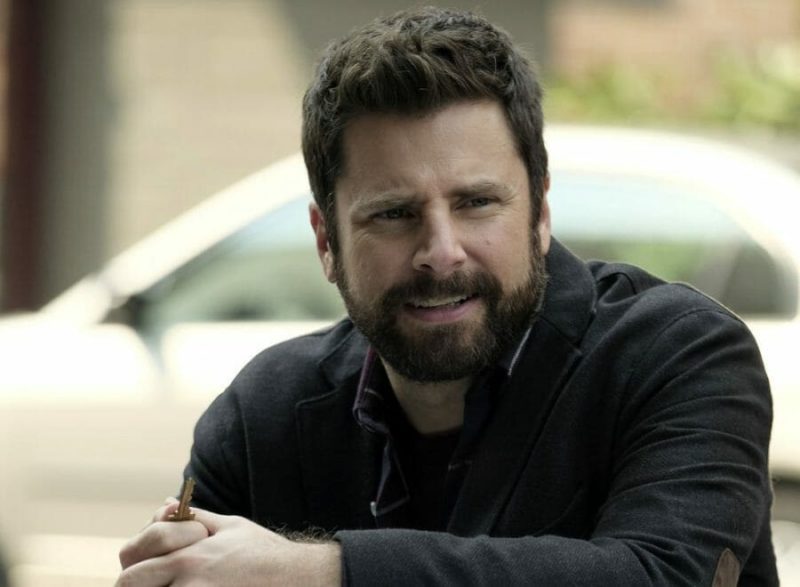 NOFS: That’s awesome. Right on man, that’s great! Speaking of all of that talent, I was so glad that I got to speak with you two especially because you co-wrote it, but I wanted to know more about writing Jimmi Simpson’s character. I struggled so hard because I liked him a little bit, but I hated him at the same time. Not only just as a viewer, but as a woman. We’ve all been in contact with that kind of man in our lives at some point. How did you craft him? He was just so interesting to me.

JR: First is hats off to Jimmi because he was a major part of the process for us as well. He was on board before there was a script. He helped develop his character. He had his hands in the whole process and he was a producer on the movie too. He was kind of a third musketeer in the process.

We talked a lot about this.. “what is the archetype?” “What type of individual did we want to shine a light on?” We thought it would be most beneficial to use a guy who’s for centuries, essentially, been hiding in plain sight. Not all these violators are ogres who you can easily spot and burn. A lot of them are charming, a lot of them are funny, a lot of them can present themselves as being generous. These are all qualities, thinly veiled qualities, that a lot of these individuals have.

We wanted to create the type of character that has been getting away with it his whole life because of where he came from, the privilege that he came from, how the people around him allowed him to feel and allowed him to grow up. Then he wakes up one day and he’s a 40-year old man. The list of grievances is too long to write and no one has ever held him accountable. We wanted to see what happens when someone goes to great lengths and great extremes to put a giant mirror in front of him, like can you get through to these people? Is reprogramming an option? Can an evolved group of thoughtful women come together and actually change the culture, one dude at a time? That’s what we decided we wanted to put out there. I mean, we all recognize what a polarizing issue this is. There was simply no way to know exactly how it was going to land.

Believe me, there’s a version of that movie that ends much more violently and there’s a much darker and perhaps satisfying ending.. at least for the short-term- where a guy really, really gets what’s coming to him. All the ladies, Julianna, was at the head of this group, kind of saying the same thing which was “That’s not going to change anything or make it right. That’s actually not the message that we want to put out there”. So for me it was like “Great. Tell me what is” because I felt like that’s what I want to do. That’s what I want to support. It’s not a dude’s version of what he thinks women are trying to say. That would be the wrong reason to make this movie and the wrong movie to make. All of those ingredients went into the recipe for who this character, Peter, should be. Once we all got on the same page and knew exactly where we were headed, Jimmi took the reins and gave, what I think is, a tour de force performance. 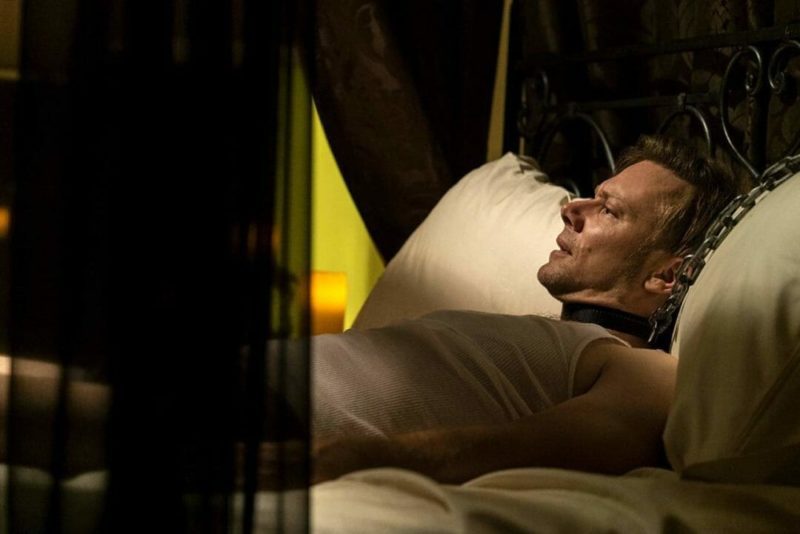 NOFS: Absolutely, yes. Everything you’ve just shared with me, I just can’t wait to digest it and share it with everyone else!

JR: Thank you, Jessica. We really, really appreciate it. Thanks for being a horror fan.

Treehouse is currently streaming exclusively on Hulu. If you haven’t yet, read my review, and then get behind the fantastic women (and man) bringing some sweet revenge to the forefront of this bewitching story by streaming it now! Let us know what you thought of the episode on Twitter, Reddit, and in the Horror Movie Fiend Club on Facebook.