The uncomfortable silence of an awkward pause, the suspicion that someone might be talking about you when you leave the room, the isolating feeling of not belonging; these fairly common experiences are the staples of many a high school hallway, work party, or frenemy gathering. But they also are the perfect foundation for horror. After all, if an extended time stuck as an awkward third wheel doesn’t kick in the ol’ fight or flights, I’m not sure what will.

In her feature debut, writer/director Amelia Moses takes feelings of social isolation to an intensely stressful level of paranoia and terror. Bleed With Me is a profoundly unsettling stress test of a film. It brings the viewer directly into the mind of its troubled protagonist as we experience the same paranoia, suspicion, and unease as the character. It’s a claustrophobic slow burn without the relief of a clear payoff, like a continuous jump scare built up without a jump. Bleed With Me is not a comfortable or fun viewing experience, but it gets under your skin and stays there.

“Bleed With Me is not a comfortable or fun viewing experience, but it gets under your skin and stays there.”

Bleed With Me follows Rowan (Lee Marshall), a troubled and introverted woman invited to a wintery week at a cabin with her friend Emily (Lauren Beatty) and Emily’s boyfriend, Brendan (Aris Tyros). As the days progress with small talk, card games, wine, and awkward pauses aplenty, Rowan begins to experience strange occurrences and senses that her friend might have a more sinister motive for her hospitality.

Bleed With Me is an adept example of how to build tension and isolation with a single setting, music, cinematography, and performances. The dialogue is somewhat stilted and awkward at the beginning, especially from Emily, but as the story progresses, it becomes clear this is intentional. It replicates Rowan’s feeling of disconnect and makes us doubt her relationship with Emily. Are these two real friends? Conversationally, they interact like work acquaintances, but Emily and Rowan eye each other with a disturbing hunger, Rowan yearning for acceptance and connection, Emily desiring something else. But what? Rowan has a strange feeling that there’s something in the woods. She notices mysterious cuts on her arm each morning, and then a snowstorm hits that increases her isolation. And her dreams become increasingly terrifying and strange — if they’re dreams at all.

We never venture beyond Rowan’s perspective; even the opening shot is a point of view from her position lying in the backseat of her friend’s car. What little we learn about her past is what she tells her friends, and her stories sometimes conflict. Rowan is an unreliable narrator to be sure, and we are never certain how much of the film’s events are real or imagined. The story leaves most of our questions unanswered or merely hints at the truth. It’s frustrating, but intentionally so. Bleed With Me brings the viewer to the heart-pounding edge of their seat and leaves them there. It’s a deliberate exercise in eliciting discomfort and confusion, and the film is not here to hold your hand.

By its nature, Bleed With Me will not be everyone’s (possibly poisoned?) cup of tea. Even as I understood what the film was doing and why I would have preferred a little less ambiguity and some more follow up on its plot breadcrumbs. Still, this film unsettled me and induced palpable anxiety that was difficult to shake. It wasn’t the cathartic experience I usually find horror to be, but doesn’t that make its goal of horrifying more of a success? Your mileage may vary, but Moses demonstrates an impressive skill for building paranoia and tension that announces her as a new horror talent to watch. Lee Marshall, who produced the film with Moses and Mariel Sharp, is convincingly unhinged as Rowan, but in a vulnerable and relatable way. She draws the viewer in and makes us share her insecurities — and her suspicions. Beatty’s performance is that of a true ice queen, warm and friendly in a performative way, but with an uncanny menace lurking beneath her eyes. I loved watching it develop as Rowan’s perceptions of her friend begin to change.

“It wasn’t the cathartic experience I usually find horror to be […but] Moses demonstrates an impressive skill for building paranoia and tension that announces her as a new horror talent to watch.”

The muted, winter white cinematography by Rene Arseneau is as bleak and isolating as the story, but with its own quiet beauty too. And the restrained score by Dominic Caterina is as chilly and stark as the snow. Bleed With Me is a well constructed, beautifully shot, excruciatingly tense film. And while a little more clarity at the conclusion would have benefited my enjoyment, comfort shouldn’t always be the goal of horror. Sometimes art exists to pull you into an all too real experience and not offer an easy escape.

Bleed With Me had its world premiere at the 2020 Fantasia Film Festival. Read all of our coverage of the fest here, and join the conversation with the Nightmare on Film Street community over on Twitter, Reddit, and in the Horror Movie Fiend Club! 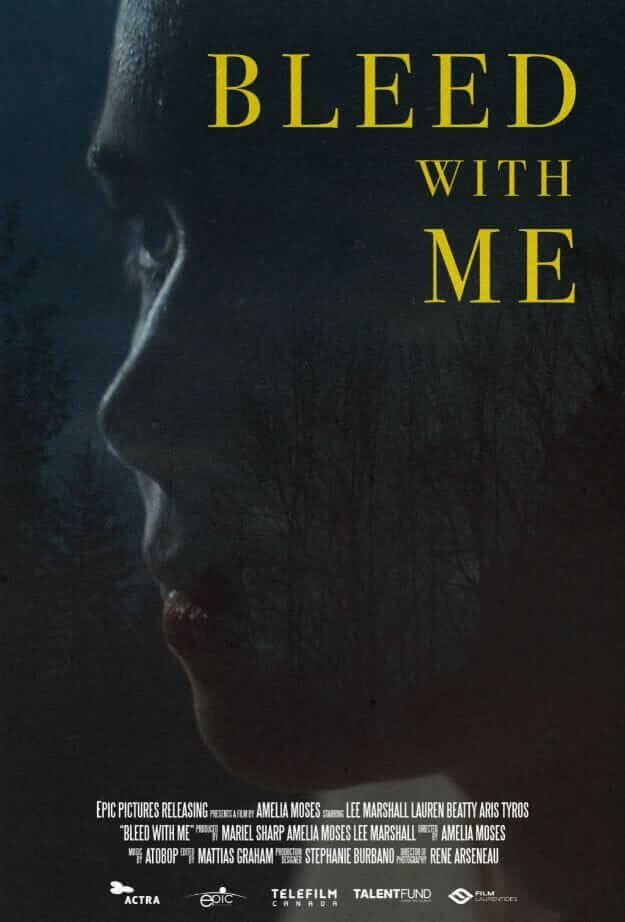 TLDR leed With Me is a deeply unsettling stress test of a film. It brings the viewer directly into the mind of its troubled protagonist as we experience the same paranoia, suspicion, and unease as the main character. It’s a claustrophobic slow burn without the relief of a clear payoff, like a continuous jump scare built up without a jump. Bleed With Me is not a comfortable or fun viewing experience, but it gets under your skin and stays there. It's ambiguity might frustrate many, but as an exercise in building terror, it's a promising debut from a directorial talent to watch in the horror world.