Horror has played with depicting the world of dreams before. The most iconic foray into the horrors of our sleeping minds is, of course, A Nightmare on Elm Street (1984), with its wonderfully constructed, just slightly off, dream sequences. Countless films have depicted the dreams of characters to build tension, even if dreams themselves aren’t the center of the story. Scifi, likewise, is no stranger to the uncanny world of REM, most famously depicted in Inception (2010). But even amongst countless predecessors, Director Anthony Scott Burns manages to conjure something unique in Come True. His sophomore feature after 2018’s Our House marks its world premiere at 2020’s Fantasia Festival.

Come True follows a troubled teen named Sarah (Julia Sarah Stone, Honeybee) currently avoiding her home. She camps out at playgrounds overnight, sneaking in through her window after her mother has left for work for a quick shower and a bite to eat. At school, she doses off in class and depends on her friend’s occasional sleepover availability to crash in an actual bed. While downing caffeine at a local coffee shop, she spots a flyer for a sleep study and it seems she’s found a perfect solution to her problems —  month-long access to a bed and some extra cash to boot. But it’s more than the lack of a bed that’s keeping Sarah up at night. She’s suffering from strange, recurring nightmares involving dark hallways, doors, and a mysterious, shadowy figure who never fails to wake her with a start. The study’s somewhat shady and secretive nature doesn’t help and as the nights progress, Sarah’s dreams become more vivid, her behavior more strange. Soon, it becomes clear that her dreams have become a powerful pathway for something horrifying.

Come True is dripping in what may become Burn’s signature aesthetic, familiar to fans of his debut film, Our House. The vibe evokes the 80s while being set in the present day. The grainy and gorgeous cinematography revels in the streets of suburbia, the hallways of high school, and the retro sterility of the concrete university building hosting the study. Neon pink and blue lighting bathes the scenes and the tech looks wonderfully vintage. It’s atmospheric without being distracting and grants the science fiction and horror aspects of Come True a unique beauty. It also has the effect of disorienting the viewer, making us question what era, what world, we’re witnessing. It’s an especially impactful touch in the case of Come True. In a film about the blurry line between waking life and the dream world, it makes us question which moments might be real and which are imagined.

The film is visually inventive both in its dream world and the waking reality. The dreams are both unnerving but oddly beautiful at once. Presented in a monochromatic pallet of shadowy blacks and greys, the dream sequences are like moving through a surrealist painting, haunted by a dread you can’t put your finger on. They almost lull you into a sleep state yourself, then make you jump like that sudden jolt that hits just as you’re drifting off.

“Come True feels like a dream, full of horror but still quiet, its secrets slipping just out of reach as we wake with a start.”

Amongst all the disorienting visuals of Come True, the grounding factor is the raw performance of Julia Sarah Stone as Sarah. She’s so believably wounded that we don’t even need to know the details of what she’s running from at home to believe it. She carries the vulnerability of sleep into her waking life, but there is a hidden strength and anger in her that’s powerful when it emerges.

The score, by Electric Youth and the director (under his composing name, Pilotpriest) plays no small part in the film’s impact. It’s dreamy and mysterious, evoking the unknown frontier of sleep, but it also signals the emotions of the characters in ways dialogue can’t. Come True is a film of unanswered questions and unspoken revelations, but the music does a lot to fill in the blanks.

The ambiguity of the film, especially the disarming ending, might be a turnoff for many viewers. It’s frustrating, but intentionally so, as it forces us to reevaluate the visions we’ve witnessed. Once it becomes apparent that this take on dreams is more David Lynch than Christopher Nolan, it’s easier to roll with the ambiguity. Burns incorporates Jungian theories of archetypes and the collective unconscious throughout the script, hinting at what this all might be about. No story about dreams should be clear cut unless it doesn’t want to truly speak to our muddy subconscious perceptions. And if you’re not out to puzzle, why tell a story about dreams at all? Come True goes all in, and while it’s unsolved mysteries might frustrate viewers, in that way it replicates its subject perfectly. Come True feels like a dream, full of horror but still quiet, its secrets slipping just out of reach as we wake with a start.

Come True celebrated its world premiere at the 2020 Fantasia Film Festival. Read all of our coverage of the fest here, and join the conversation with the Nightmare on Film Street community over on Twitter, Reddit, and in the Horror Movie Fiend Club! 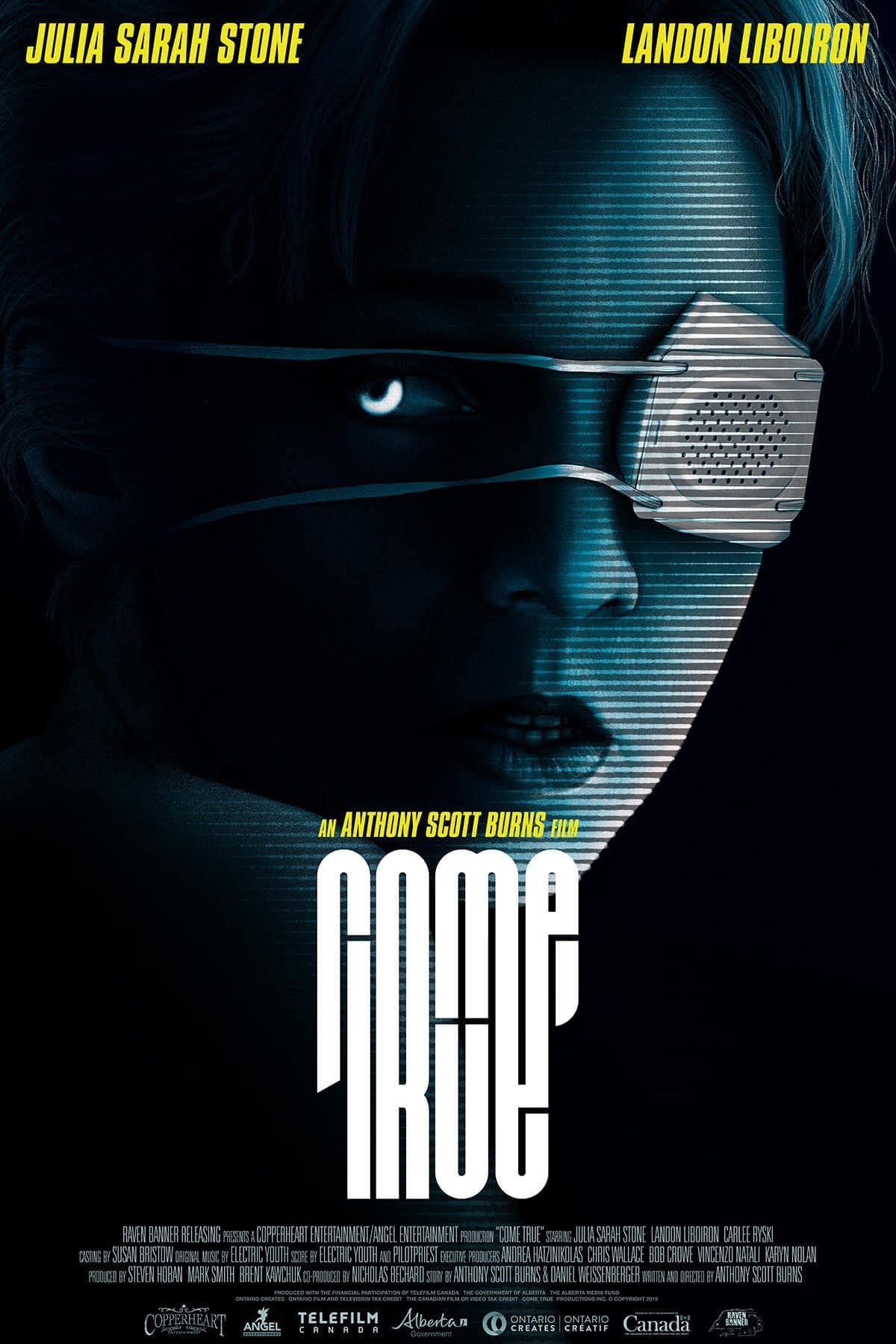 TLDR Come True is an ambitious and layered film, dripping in aesthetic and grounded in an excellent lead performance by Julia Sarah Stone. It's a unique visual language that brings dreams to life with beauty and horror, but its ambiguity and ending might alienate viewers. Still, it's a powerful and unique entry in the realm of dream horror.