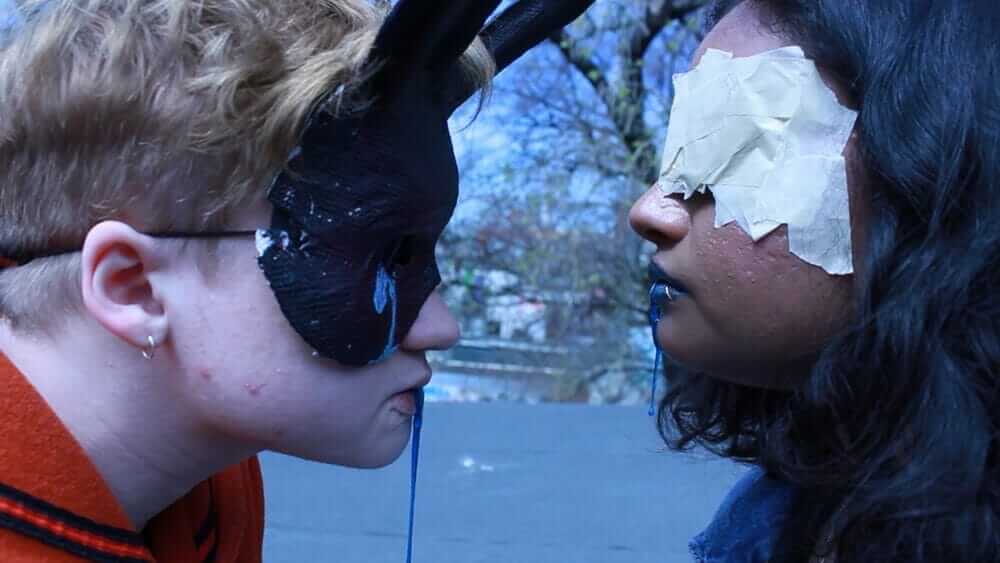 Being queer is pretty cool, but also pretty exhausting. As you search to find yourself in film, television, books, and more, you find yourself creating narratives within those stories. Being queer requires an imagination out of survival, an imagination that believes you fit neatly into typically heterosexual stories. Out of this imagination was born the idea that queerness is not only about sexuality but about rejecting societal norms. The Queer Horror shorts of the 2020 Final Girls Berlin Film Festival are a collective middle finger to expectations of art and reimagine the horror genre as a place of fluidity, sex, and terror.

These six films are all different in tone, subject matter, and visual style, but they are all distinctly queer in their own way. The six directors featured in this section showcase that queer voices have always existed and they can tell stories, too. Whether creating all-new tales or reenvisioning an old story with a contemporary twist, these films tap into the potential of queer filmmaking to illustrate the neverending importance of diverse voices in horror.

In Skin, “a queer teenager struggling with the onset of puberty escapes reality for a chance at a new, better-fitting identity.” Puberty is so often a topic of horror movies, showing the young feminine body becoming monstrous and unruly. In Skin, though, this is not about some traumatic transformation. Instead, it is a contemplative tale of body horror where the young person tries to take control of that unavoidable change. They wish to be in charge of the narrative around their body and try to exert some control over it through what they wear or what their hair looks like. It is a beautiful marriage of horror and drama that utilizes body horror as empowering rather than violating. So often puberty in film is about the cisgender experience. But Skin works to show how puberty affects trans kids and the horrors they face through body dysmorphia.

TEA PARTIES ARE FOR BABIES, Directed by Teja LoBreglio

We’d all be lying if we didn’t admit we at one point fantasized about kissing our school bully—or was that just me? In Tea Parties For Babies, “Emily bumps into a popular girl from high school on a spring day in the park, which turns into a sexy and dangerous night in the city.” This short is a queer, modern reimagining of Alice In Wonderland as Emily is lead down a rabbit hole full of booze and cocaine. It is an interesting take on a lesbian Alice taken advantage of by her high school crush, but it felt rushed at the end. The “off with her head moment” comes and goes and we aren’t allowed to revel in the demise of an iconic figure; sometimes the queen gets to win.

This short had me yelling one thing: normalize showing women on dates with other women! In Labrys, “A young woman on her first date with another woman is forced to come to terms with who…and what she has always been.” In its short runtime, Labrys shows a femme on a date with a butch lesbian, illustrates the dangers of being openly gay in public, and has a badass woman reclaim her power. Colangelo is able to portray the dangerous reality of being queer while also leaning into fantasy and horror to imagine a world where women can punish those who make them feel unsafe. I’d watch a feature film about this couple. Sometimes the latest trend is a total scam, or potentially deadly. Such is the case in Blood Orange. In the world of the film, “Something’s not right about Angela. A sudden change in her behavior since the start of a new job at the hip local juice bar has her best friend, Em, deeply concerned. As Angela struggles to see beyond her own reflection, she is blind to the secret horrors of who she’s working for.” While Blood Orange is arguably the least queer as it doesn’t feature openly gay characters, it is dripping with an aesthetic that screams queerness. Bright neon colors pop and burn your eyes and every character is wearing outfits that scream 1980s. This short has texture, as you can practically feel the scene underneath your fingertips. Plus, it features the queerest monster of them all: the vampire. Blood Orange is about portraying the look and feel of potential queerness without explicitly stating it.

Destruction Makes The World Burn Brighter is another example of taking an existing story/genre and making it queer by simply adding a gay couple to its center. In this case, the short takes on the well-worn zombie film. In the short, “A young couple in the not so distant future find their secret existence threatened when reserves run low.” This short is, well, short and sweet. It focuses on one very specific central conceit and quietly delivers on it. While zombie narratives are a dime a dozen, this twist on the genre is subdued. There are no massive fight sequences or heart-pounding escapes. Instead, this is just about two women trying to survive in a cold future. It was a film that didn’t seem like much at first, but has sat in my chest and blossomed into something else.

The program is bookended by films that look at the transformative power of puberty. Lone Wolf is all about the breathless tension that permeates the slumber party. The short follows 15-year-old Sam who “determined to fit in at a sleepover… ignores cruel taunts from Blair and her growing feelings Willow, but she can’t ignore the strange things happening to her body.” While utilizing the werewolf metaphor for getting your period, Lone Wolf is much less traumatic and displays solidarity between young girls. While a bully picks on Sam, the two other girls stick up for Sam and try to discourage such behavior. In a slumber party movie for 2020 as young girls are shown experiencing bodily turmoil together.

Have you been following the short film blocks of the Final Girls Berlin Film Festival? What do you think of the “Queer Horror” shorts block? Let us know your thoughts over on Twitter, Reddit, or in the Horror Movie Fiend Club on Facebook!