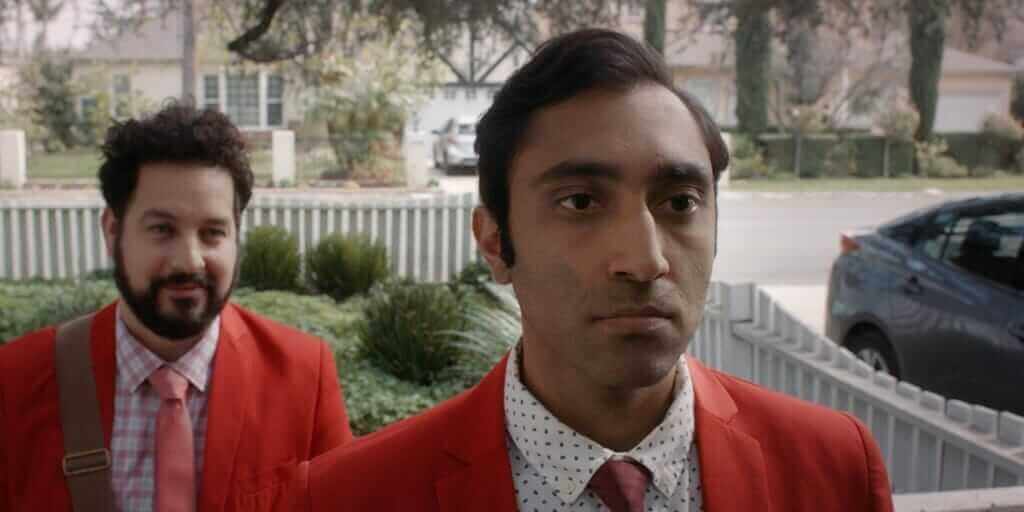 Everyone will need insurance at some point in their life but the last people anyone wants to deal with are those annoying insurance salesmen. There’s a special place in Hell reserved for people like that, as well as their greedy bosses. In the twisted dark comedy Keeping Company, we get to see what happens to two salesmen when they go knocking on the wrong door. It’s a debut feature for Josh Wallace, who previously worked on shorts for Funny Or Die.

Sonny (co-writer Devin Das) and his partner Noah (Ahmed Bharoocha, Adult Swim’s Dream Corp LLC) are representatives for Caste Insurance, whose job it is to go door-to-door in bright red jackets to guilt ordinary citizens into buying insurance. Sonny is tightly wound, on a mission to prove himself to his disappointed father Mr. Reddy (Bernard White, The Matrix Reloaded), whereas Noah is a ray of sunshine, with a childlike outlook on life. One day, while on duty, Sonny‘s car is rear-ended by a stranger who immediately flees the scene. Sonny and Noah pursue the nervous stranger to his suburban home, telling him if he doesn’t buy insurance off them, they’ll call the cops. He reluctantly invites them in. But as Sonny and Noah are surveying the pipes in the basement, looking to tack flood insurance onto the auto insurance, the man knocks them both out and shackles them to the wall.

“Keeping Company satisfies and entertains thanks to a strong cast, tight editing and Wallace and Das’ multi-layered script.”

A week has passed since Sonny and Noah went missing. Back at Caste Insurance headquarters, CEO Paula (Gillian Vigman, The Hangover trilogy) wants to keep Sonny and Noah declared missing so she won’t have to pay out any of their life policies to their families. She’s determined to pocket as much of the company’s money as she can get away with to buy the yacht of her dreams, yet that dream is in jeopardy without Sonny and Noah bringing in sales. When Mr. Reddy storms into the office, demanding to collect on his son’s life insurance, Paula tells her employees Frank (Andy Buckley, Shameless) and Danika (Medina Senghore, Happy!) to stalk Mr. Reddy and dig up whatever dirt they can find on him.

The first thing that struck me about Keeping Company is its characters. I really enjoyed the dynamic between Sonny and Noah because they couldn’t be more different. Sonny has a dog-eat-dog mentality, not caring whose head he steps on to climb the corporate ladder. Similarly, he doesn’t care who he has to sacrifice, as long as he can get out of the basement alive and finally get that promotion that Paula has been dangling above him, thus making his dad proud for once. Noah, on the other hand, has a smile on his face at all times, even when he’s chained up in the basement. He sees the inherent good in his captor Lucas (Jacob Grodnik, The Fanatic), and the two connect on an emotional level when they realize they were both robbed of a proper childhood. 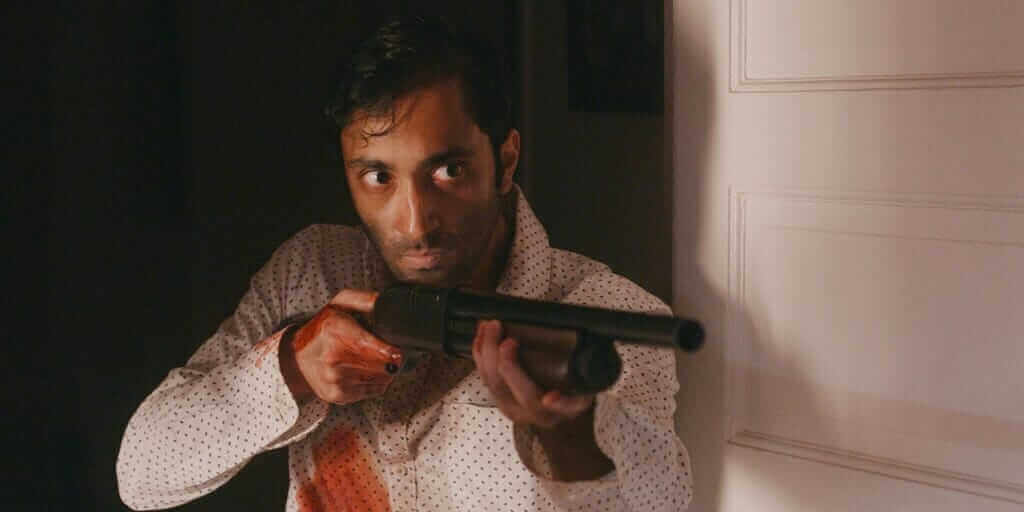 Lucas has a severe Norman Bates complex, except with intense granny issues. He is ruled by his malevolent grandmother (Suzanne Savoy, Better Call Saul), who orders him to do violent things, all the while insulting him and telling him she is the only person who will ever love him. A lot of attention is paid to Lucas‘ mental state, as we see how he has been warped by his grandma’s constant psychological torment. At first, I had a theory that Grandma was a figment of Lucas‘ imagination because of her hands-off approach to the abductees, but no, she is very real. Parallels can be drawn between Grandma and Paula, since they both manipulate their underlings to do their bidding and get their hands dirty while they reap the rewards. The carnage committed on Grandma‘s behalf could be seen as a metaphor for Paula‘s corporate greed, preying on the weak and poor. As much as anyone would like to fantasize about torturing insurance salesmen, Sonny and Noah are pawns in a bigger game. Like Lucas, they are only following orders.

At 82 minutes, Keeping Company satisfies and entertains thanks to a strong cast, tight editing and Wallace and Das’ multi-layered script. I look forward to seeing what the duo comes up with next. As dark as the story gets, the overall tone doesn’t feel overly disturbing. Things do get bloody, but never excessively gory. Whenever a meat cleaver is raised above somebody’s head, the camera cuts away before it comes crashing down. For that reason, it feels safe to laugh, even during moments of violence. You will be able to sleep soundly after viewing, even if the evils of capitalism continue to claim lives. Keeping Company‘s humor is cynical to the bone and, just like in real life, those at the bottom will continue to lose while those at the top will keep getting richer.

“Keeping Company‘s humor is cynical to the bone…”

Keeping Company celebrated its Regional Premiere at Panic Fest 2021. Click HERE to follow our full coverage of the festival and be sure to let us know if you enjoyed Keeping Company, and if you’ll ever look at insurance salesman the same way again over on Twitter, Reddit, Facebook, and in the official Nightmare on Film Street Discord. Not a social media fan? Get more horror delivered straight to your inbox by joining the Neighbourhood Watch Newsletter.

TLDR At 82 minutes, Keeping Company satisfies and entertains thanks to a strong cast, tight editing and Wallace and Das' multi-layered script. I look forward to seeing what the duo comes up with next. As dark as the story gets, the overall tone doesn't feel overly disturbing. Things do get bloody, but never excessively gory. Whenever a meat cleaver is raised above somebody's head, the camera cuts away before it comes crashing down. For that reason, it feels safe to laugh, even during moments of violence. You will be able to sleep soundly after viewing, even if the evils of capitalism continue to claim lives.