Talk about summarizing an entire film in two lines of dialogue. A homage to the 80’s slasher era, Marcel Walz’s Pretty Boy captures all of the campy goodness of its ancestors, from the synth-pop soundtrack to the oblivious cast of lambs being led to slaughter.

Pretty Boy picks up immediately after the events of Blind (2019). The titular slasher (Jed Rowen), carrying an unconscious Faye (Sarah French) wanders the streets and right into an ’80s themed Valentine’s party. As music producer Preston (Jake Red) entertains the guests at his gathering, Pretty Boy slashes his way through each of the partygoers. Faye awakens handcuffed to a bed and must find a way to escape from the killer’s obsessive grasps. However, the masked superfan may be the least of the blind actress’s problems. 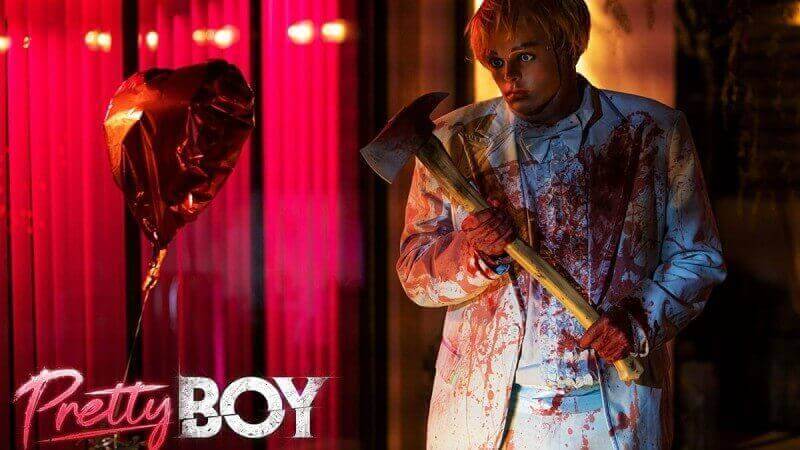 Director Marcel Walz’s follow-up film does a nice job rehashing the previous film’s events via flashbacks during the opening credits. From there, we are immediately treated to a gloriously brooding synth-pop tune that will have you seeing neon lights behind your eyelids. It’s an appropriate entrance to Pretty Boy, as the film’s greatest strength is the immersive 80’s slasher experience that serves as the soul of the film. Instead of changing the timeline to fit this aesthetic, the majority of the story takes place at a themed Valentine’s Day party.

It’s not all set pieces and synths, though. The cast’s portrayal of partygoers fit snugly into the era of Friday the 13th and A Nightmare on Elm Street. The perfect amount of naughty and dimwitted, each one gets picked off in diverse fashion. The kills themselves play as homages to our favorite franchises, with one unlucky victim losing an eye in Friday the 13th 3D style.

“[…] you just cannot go wrong with a masked killer crashing an 80’s party.”

Sarah French and Jed Rowen reprise their roles as the blind Faye and the Pretty Boy killer, delivering effective performances as the final girl and the maniac killer. There’s just something about that “handsome” doll mask and the white tuxedo that Pretty Boy wears that works to great effect. Endless slasher flicks that try so hard to give their serial killers a memorable look, mirroring Jason Voorhees and Michael Myers, and they just cannot hit it. The getup worked fine in Blind, but it really stands out here. Rowen’s hulking, erratic depiction of a fanboy grown monstrous may never garner near the attention of the aforementioned horror icons. However, the combination with French’s work as the female protagonist makes for a rarity these days – enthralling characters capable of carrying a horror franchise. Whether a third film is in the works or not, I don’t know, but I hope so.

Blind received high marks for appearing professionally shot for an indie feature, and its successor doesn’t disappoint. Eye-catching shots pepper the film from start to finish, one after another. In one such instance, the killer sits next to Fay‘s bed, uncomfortably rocking back and forth in and out of the camera’s focus. In another, one of the victims fiddling inside a car turns the headlights on, spotlighting Pretty Boy in the garage. The use of party lights and bedroom lamps adds a unique, pleasing visual touch to the film. Almost like the glow of neon lights, but without the neon. 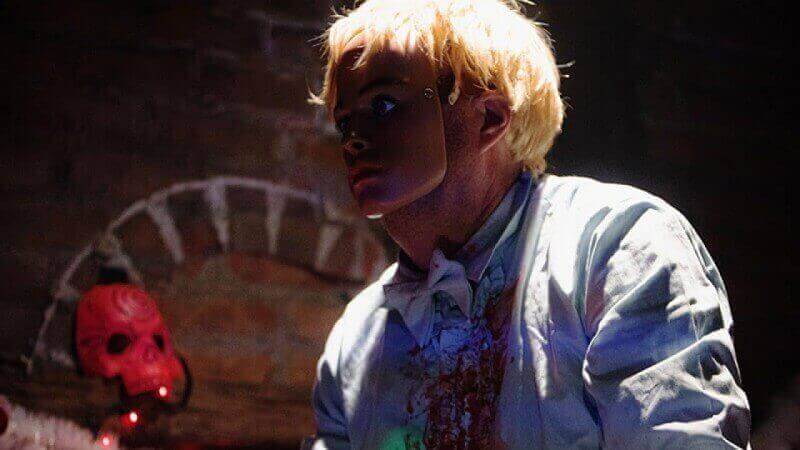 For how much delectable 80’s slasher fun the first two acts are of Pretty Boy, things flip hard and fast. Abandoning the homages of its predecessors, the film crawls into the depraved backstory of the Pretty Boy killer. Some of this works, particularly the shots of the killer’s basement lair. Between the Christmas lights and a faceless mannequin, the creep factor is on point. However, where this film chooses to go is such a radical, upsetting departure from the fun of the first two acts that I found myself almost struggling to watch. It’s not as though this flies out of left field, though. The events of Blind, a drastically darker film as a whole, certainly set up the plausibility of it all. The mood swing from fun to appalled is just too drastic to work here, and the material may have been better suited for a darker concluding sequel. You can’t watch Tucker and Dale vs. Evil and follow it up with Gerald’s Game.

Notwithstanding, the level of professional filmmaking abundant in Pretty Boy takes the feature far above the limitations of indie horror. And you just cannot go wrong with a masked killer crashing an 80’s party. Despite the brutal whiplash of the third act, Pretty Boy brings too much slasher and synth to pass up.

“Despite the brutal whiplash of the third act, Pretty Boy brings too much slasher and synth to pass up.”

Pretty Boy celebrated its world premiere at the Popcorn Frights Film Festival. Click HERE to follow our continued coverage of the festival and be sure to let us know what you thought of the Pretty Boy Killer over on Twitter, Reddit, Facebook, and in the official Nightmare on Film Street Discord. Not a social media fan? Get more horror delivered straight to your inbox by joining the Neighbourhood Watch Newsletter. 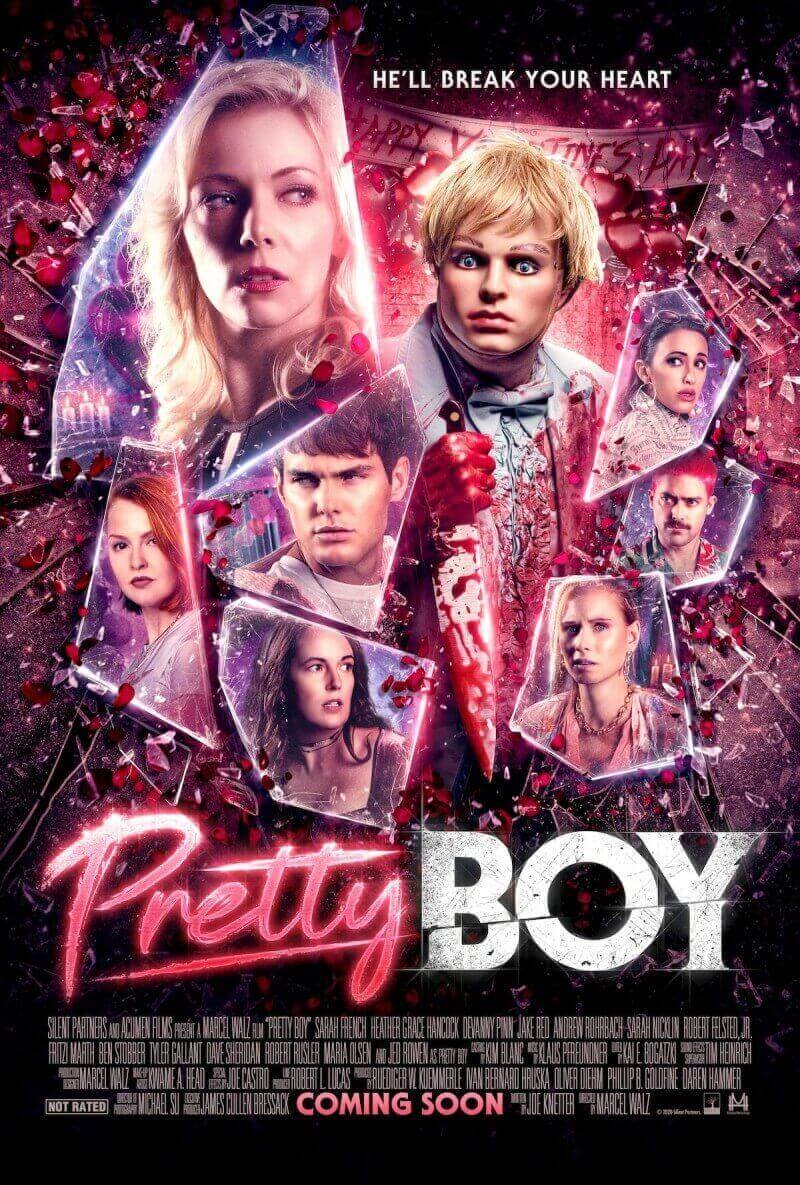 TLDR The level of professional filmmaking abundant in Pretty Boy takes the feature far above the limitations of indie horror. And you just cannot go wrong with a masked killer crashing an 80's party. Despite the brutal whiplash of the third act, Pretty Boy brings too much slasher and synth to pass up.