A road trip alone can be a freeing experience for some or a lonely ordeal for others, but one never expects it to be a deadly encounter. There are plenty of unforeseen troubles that hide within the vast masses of trees and mountain areas bordering the pavement that the prospect of a human assailant might seem far off from the course. Director John Hyams (Dragon Eyes) explores a harrowing situation in his film Alone when “A recently widowed traveler is kidnapped by a cold blooded killer, only to escape into the wilderness where she is forced to battle against the elements as her pursuer closes in on her.”

Alone is a raw race of wills between predator and prey pronounced by stunning direction and cinematography set within a distinctive landscape that offers its own set of nuanced challenges. With fantastic performances by Jules Willcox (Dirty John), Marc Menchaca (The Outsider), and Anthony Heald (Silence Of The Lambs), Alone is a commanding exercise through a thrilling power play between one woman and her attacker. 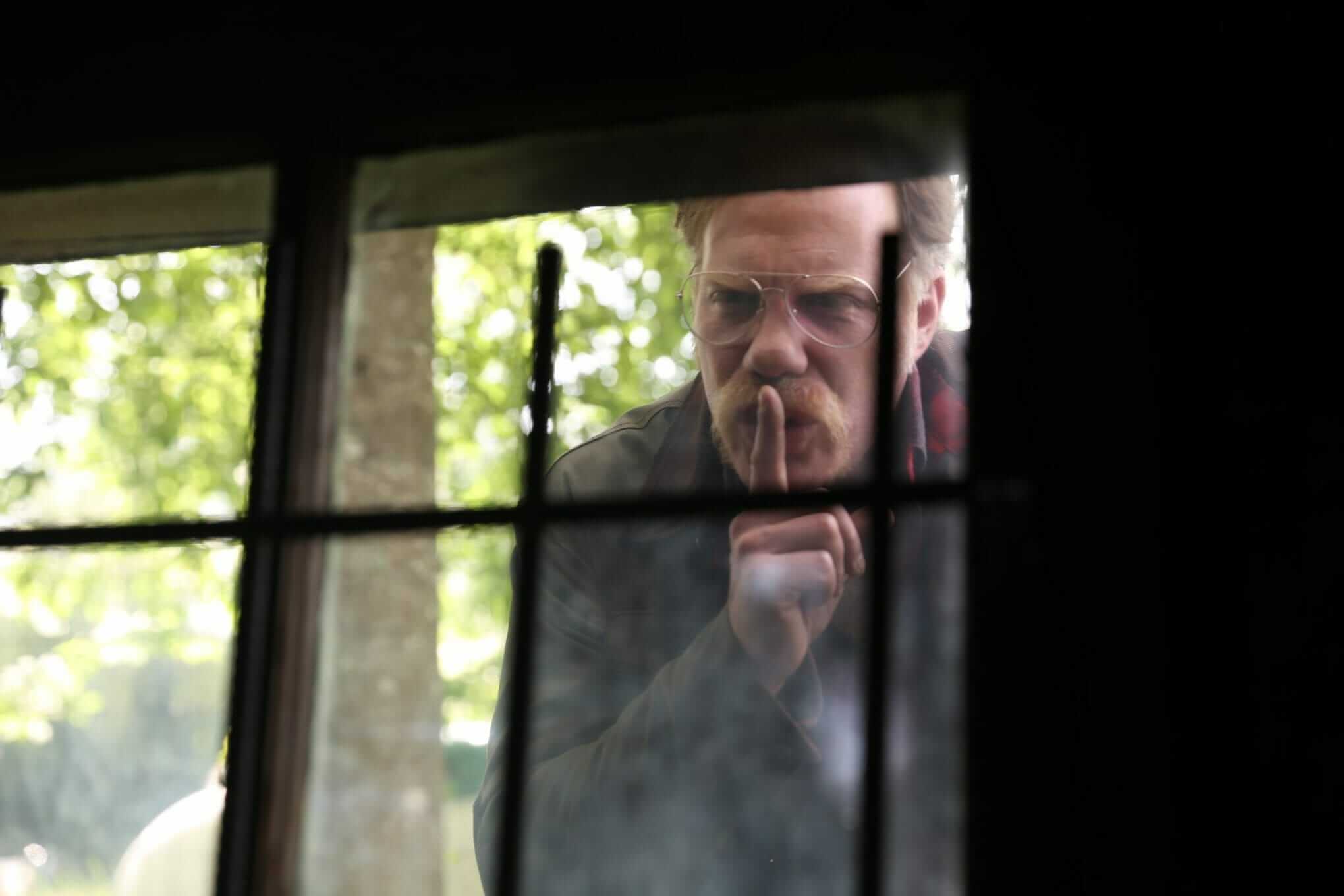 The Rules Of The Road

When it comes to such a straightforward plot like that of Alone, the effect of a film relies on outside components to really set it apart from similar projections. As Jessica goes from her solitary traveling route to alone in confinement against her will, John Hyams masterfully plays on the rudimentary state of the open road. The isolation is loudly scenic and uniform as the woods serve as both a source of escape and an arresting landscape of peril. The score ranges from a harrowing tread to a literal heart-pounding blend that functionally adapts to the film’s conditional setting and circumstances with fantastic, almost understated style. The neutral colored palette composes a constructive aesthetic that leans into it’s rural surroundings. The title itself, Alone, encompasses the thematic essence of remote activity whether on our heroine’s own volition or not. The strange openness of the setting both provides a hidden environment for predatory behavior and a level playing field fit for a face-off of perseverance as Jessica and her captor battle one another to the death.

Utilizing the vast space of Alone are two characters, Jessica and The Man. Acting as her attacker and foil representation, The Man is a nameless villain many, especially women, know all too well. He appears kind and friendly, but has a hidden agenda behind his oversized lenses. Marc Menchaca puts on a chilling performance as a realistic villain bent on hunting, breaking, torturing, and killing women he seemingly stalks off of the interstate. He immediately takes over with impending malice but is met with Jessica’s bravery and determination. Something as candid as The Man’s large black vehicle in contrast to Jessica’s light-colored car used to create a distinction between the characters speaks to the care put into the background details. The Man is dark and menacing, while she is an average woman carrying baggage. Jessica’s character is well-written, casting her in both a light of vulnerability and resourcefulness. The physical attacks she suffers almost come secondary to the verbal taunts, gaslighting, and mental antagonizing The Man inflicts on her as she also endured the elements. Their exchanges, before and after his intentions are revealed, are close and uncomfortable which torques the tension throughout. Once the action gains traction, their dynamic becomes a push and pull of power, strength, and dignity. 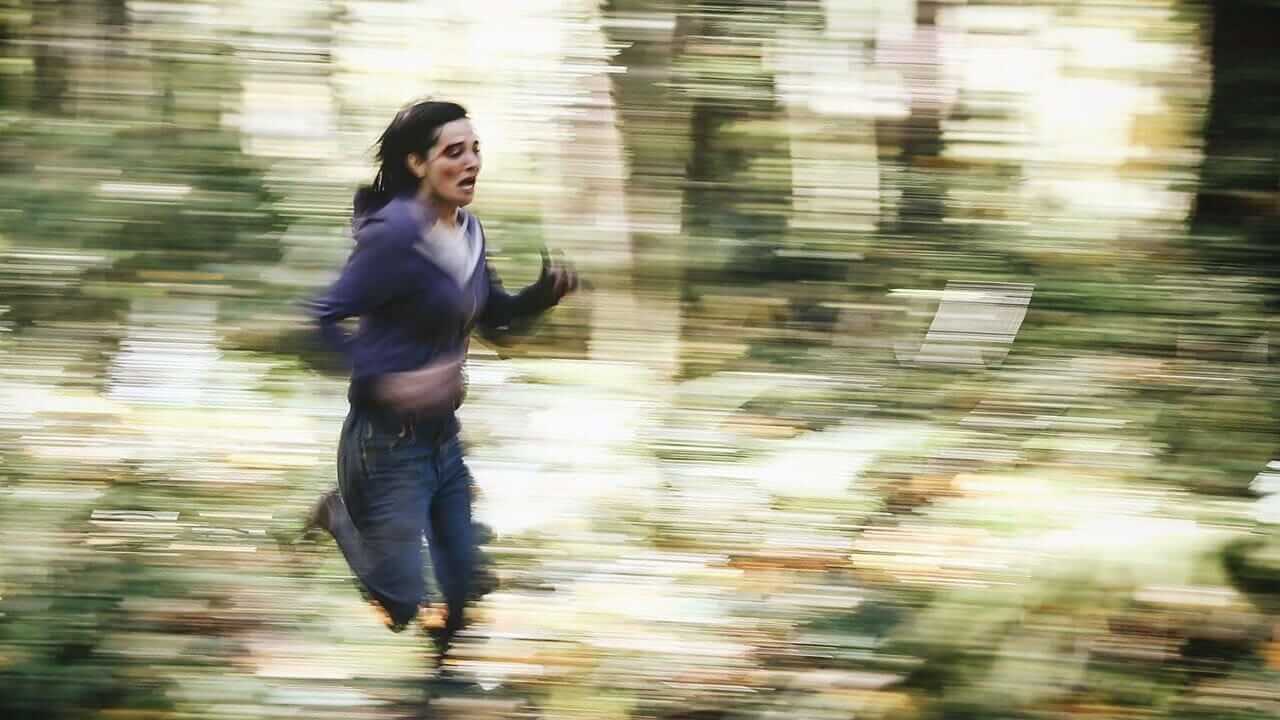 ‘The Road’, ‘The River’, ‘The Rain’, ‘The Night’, and ‘The Clearing’ are the title cards that outline the narrative. Breaking up Jessica’s journey into segments gives each story a distinctive natural environment that seems to be a subtle running theme throughout the film. Following this linear adventure provides the overall story with ample exposition and, like any solid trip, definitive start and endpoints. With instants of exhilaration, lingering notes of apprehension, and fleeting moments of intensity, John Hyams establishes a deep drive that crafts simplicity and focus. Effortlessly direct, the factors of horror are clear and present. The film does not relish in unnecessary gore, enhances the realistic elements of attack, and maintains control of hopeless circumstances without saturating the scenes in needless embellishment. The tone is strikingly confrontational and organic which allows viewer’s attention to be drawn in naturally and effortlessly. Alone is trim and steady, allowing a slow build to compress an impressive composition that quickens the pulse.

Made to accompany the looming presence of danger and the surrounding character of nature, the camerawork evolves around aerial shots (especially a reverse one that is an exceptional scene) and first-person viewpoints. Mixed with onlooking positions and tracking shots, the cinematography of Alone dares to take a solitary state of storytelling through a multitude of effective perspectives. Intentional angles and framing elevate the film’s tight application as the story drives full-speed onto compelling, winding roads of terror and drama. The subject focus is concentrated and sharp, much like Alone’s narrative, giving its fastened grip a taut steer in all the right directions. The story of a woman stalked and hunted by a stranger has become a classic trope in thriller-style cinema but this story is told with a sophisticated and confident hand. Hyams invites viewers to not only observe Jessica in her fight for survival, but partake in an inconspicuous backseat ride through her experience and determination to live. 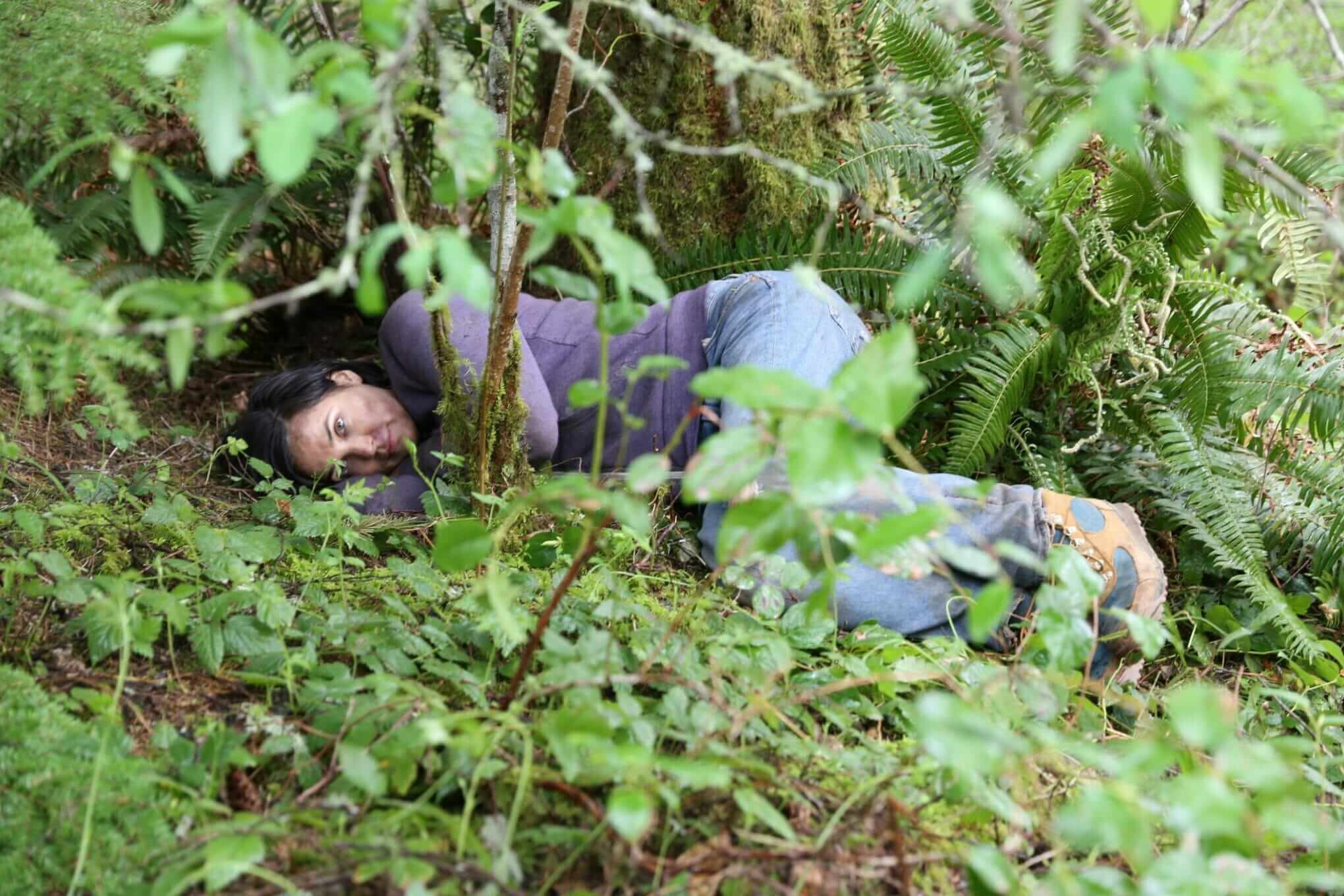 The horror genre is, unfortunately, still deemed as a vicious category of cinema that portrays the woman as a helpless victim by some viewers and critics. For those more in touch, the genre continues to grow in celebration of complexities. Jessica as a character is one who must face a murderous threat and in doing so, overcomes guilt of her lost relationship. Dimension is consistently applied to her role as she appeals to true emotion and further hope in empowerment. From the start of Alone, she is self-sufficient and independent which only works to her advantage when she finds herself as a stranger’s target. From a complicated relationship with her parents to the struggle of her internal grief, Jessica is an admirable hero who refuses to go down without a fight. Writer Mattias Olsson’s (Gone) screenplay crafts a modern woman dealing with very real trauma in a very real, horrific situation. She is caught in a scenario that many women seldom survive, so the film’s fresh outcome is a welcome resolution. Alone is a courageous portrait of one victim’s comeuppance. Though The Man is able to brutalize her, she pushes through and remains ultimately unbreakable.

From the moment a woman is handed her first driver’s license, she is taught the rules of protection from unstoppable predators that prey on their freedom. Being aware, carrying defensive objects, locking up, and even being versed in appropriate communication are all common practices women are instructed to abide by when traveling any given distance. Alone sets these unpromising expectations in place through Jessica and unravels the treachery that occurs should they fail to work. As a woman who traveled often for work, the unsettling atmosphere of Alone’s first act is undoubtedly relatable and heavily authentic. Hyams’ film perfectly illustrates how unsafe a woman is on the road by herself. Jessica is smart enough to go from polite to curt to rude, doing all the right things to protect herself from a gut-reaction to The Man’s following. The impending danger of Alone is as palpable as the final result is cathartic. Every blow to her attacker’s plan are breaths of victory with a crowned jewel exposure that satisfies in all the right ways. Alone gives life to a problem that persists and portrays the way in which women can survive their attackers and their trauma alike as a volatile showdown from within. Yes, sometimes bad men win… but sometimes they lose.

“The story of a woman stalked and hunted by a stranger has become a classic trope in thriller-style cinema but this story is told with a sophisticated and confident hand.”

Bravery is the peak point of John Hyams’ Alone as it comments on an individual’s agency countering the precarious hazards of both human and environmental nature. Though tough and relentless, like any effective genre piece, Alone is equally tasteful and collected. Hyams’ daring balance and precision within each and every scene is noteworthy, breaking a promising path for his future filmmaking career. The character of Jessica proves to not only be a worthy opponent when it comes to The Man’s cruel motives and endgame, but an admirable representation of bold, singular womanly valor. The film itself is a commendable exercise in distress with a topical message that comments on the steadfast strengths of women as fighters, victims, and heroes.

Alone is available in participating theaters and on demand on Friday, September 18th, 2020. What do you think of John Hyams’ Alone? Do you feel the execution is just as effective as the film’s meaning? What do you think about the performances of Jules Willcox and Marc Menchaca? Let us know your thoughts over on Twitter, Reddit, or in the Horror Movie Fiend Club on Facebook! 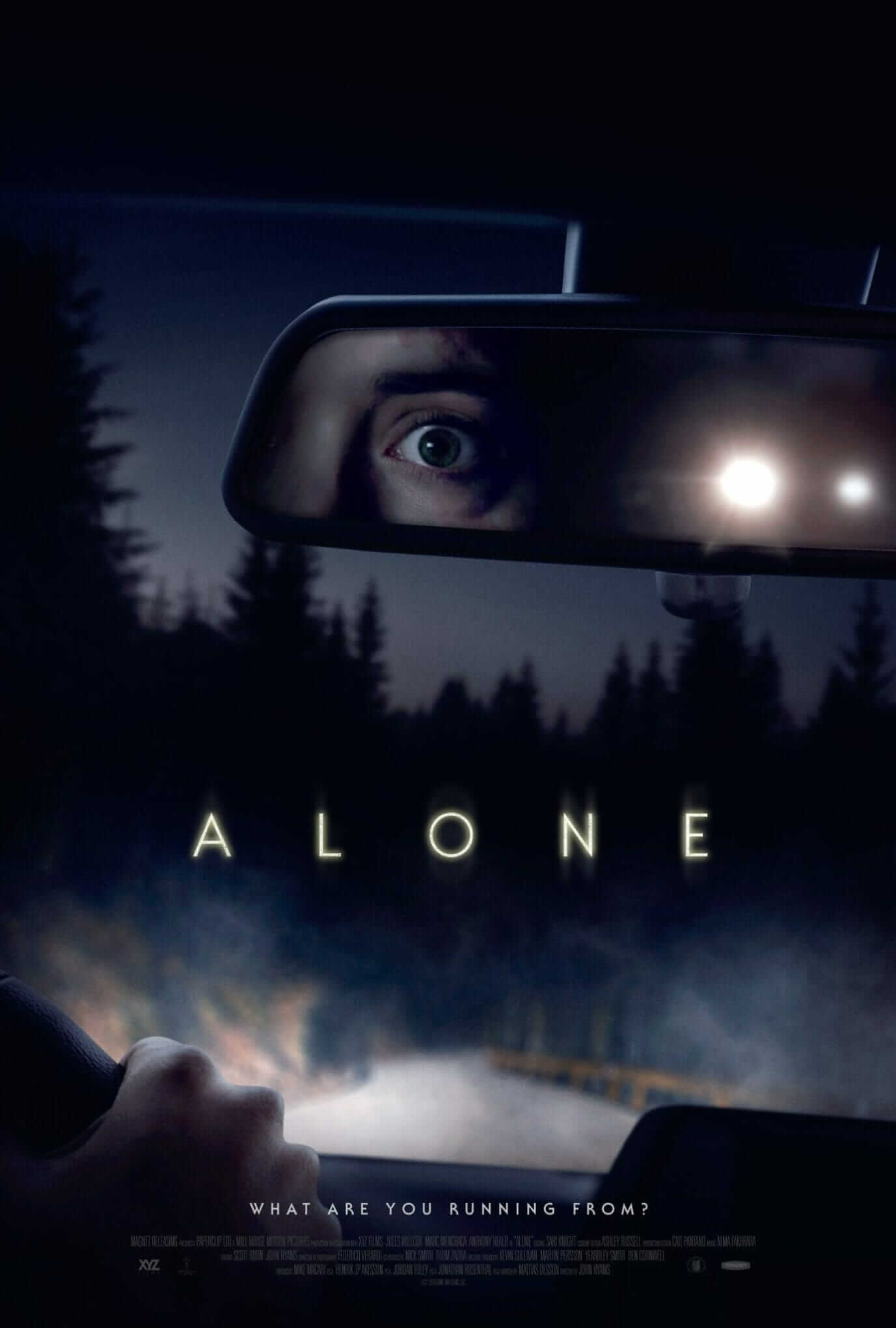