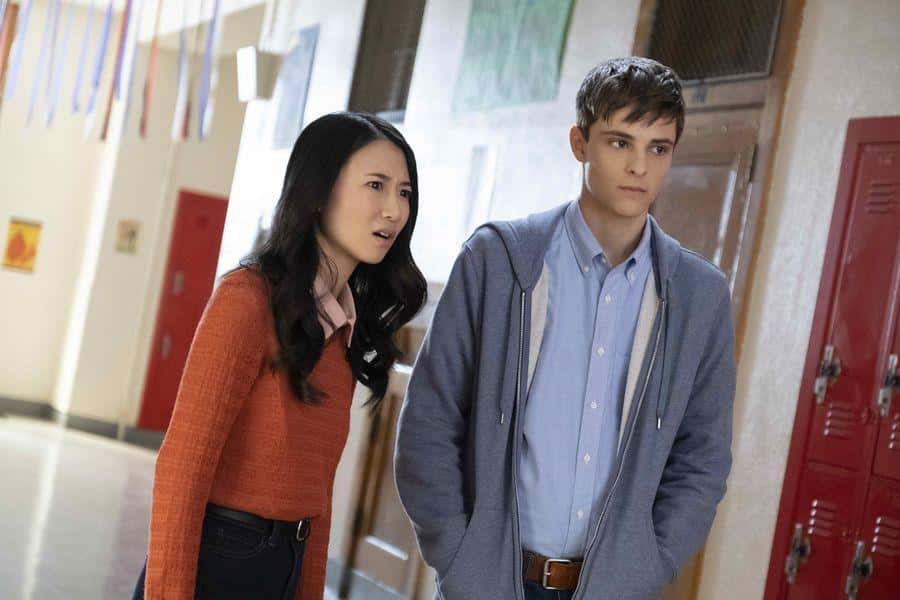 We’ve got spirit, yes we do! We’ve got spirit, how ‘bout you? As summer vacation comes to an end and the stores are lined with all the pens, pencils, binders, and themed paper goods only us strange adults dream about, the first day of school draws closer. While it can be a fresh new beginning for most, the start of a new year can initiate some pretty nasty internal fears. No, parents, I’m not talking about you this time. Director Mike Gan’s School Spirit, Blumhouse’s eleventh episode installment to Hulu’s exclusive 12-month horror anthology series Into The Dark, chooses the path of a classic teenage slasher just in time for students to embrace the first day of a new school year… and we embrace the relief of knowing we never have to go back.

School Spirit focuses on Erica Yang, the overachieving class president of the Helbrook Admirals, who finds herself in trouble following the first week of school for an unnamed offense that could ruin all of her Harvard-bound hard work. Experiencing a very Breakfast Club-style detention with four other less-disciplined classmates, Vic, Lizzy, Brett, and Russ, and their aggressive superior Vice Principal, Mr. Armstrong, Erica believes the worst part of her Saturday punishment will be scraping gum off the bottom of a classroom table. When the myth of The School Spirit becomes more of a reality, the teenagers slowly believe the school is really haunted by more than just a school legend.

Academic roles and expectations are abandoned in this new age slasher as School Spirit reports high grades in all the categories that count when it comes to the horror genre’s favorite type of murder mystery.

When it comes to the cool kids of the horror genre class, slashers always take the honor roll. Representing the manifestation of our worst nightmares, and sometimes even something more metaphorical, these figures are unstoppable forces meant to wreak havoc and earn body count numbers. The slasher formula may be easily duplicated as cheaters have consistently abused the privileged standards, but a few bright stars managed to stand out from the crowd and get it right all on their own. Writers Patrick Casey (2020’s Sonic the Hedgehog) and Josh Miller (Dorm Daze) prove they can demand the full attention of the class with their concept, costume, and kills in School Spirit.

Beginning with a clever gimmick of a name that has, much to my surprise, not been used before, this ‘Back To School’ episode of Into The Dark revolves around the mythical School Spirit of a deceased teacher that haunts and hunts the ‘bad’ students of Helbrook High School. While The Admiral mascot doesn’t seem like much of a threat at first glance, it is the mysterious killer’s persona of choice. The caped costume, long sword, and shadowed demeanor complete with a decrepit face mask is more than enough to score points on my own personal rubric of what makes a good slasher look great. School Spirit captures the adolescent essence of Goosebumps, but quickly escalates to a more mature 90’s-style horror. From a true cold open to a roll-call of potential victims, as well as villains and red herrings, to a few delightful practical effects kills, School Spirit invokes all of the positive vibes we strive for in a modern academic massacre.

It could be the age talking, but lately, I’ve found it very hard to connect with teenagers both in film and in reality. Contemporary adolescent characters seem to be either lost on me or alien to my understanding and appeal. The characters of School Spirit seem to be the first few that I could relate to and appreciate. The group of outcasts punished to detention explore the generic vices of insubordination, avoiding their family life, social and academic pressures, and fearing for the future. I found that I could reflect on each of them with nostalgia, but also with a more grown-up frame of mind.

The digs at poor school funding are sad truths built within communities all over the United States. Erica’s drive to be the star student truly speaks to the weight high schoolers feel every day of their academic careers and the desperation to succeed. Mr. Armstrong’s alcohol dependency to push through the school day while family issues drown him at home is a grim portrayal of struggling, yet dedicated educators.  Lizzy and Vic’s rebellious, delinquent behavior is a cry for help from their negative and lonely home lives. School Spirit, while fun and easy to watch, makes a point to add meaning behind its teen homages and scare tactics. These daily pressures are, in a way, the real horrors of this episode.

Though School Spirit earns a lot of extra credit throughout the episode’s nearly sound slasher structure, my only criticism lies with the pacing. The film starts off really strong, but seems to lag just a hair in the beginning of the second act, utilizing more time than necessary to build up The Breakfast Club feel of the student gathering. The focus does lay a lot of groundwork toward the individual students as well as the Vice Principal, which builds on our connections to the characters, but may have paid too much time to John Hughes over Wes Craven in the horror perspective. Given the bits of terror we observe in the third act, and the pretty intense kills and scares peppered throughout, I do think time would have been better spent through a more graphic lens.

Gan does play it a little close to the cuff, but it’s hard to blame him for safeguarding what could be a typical slasher ripoff. His restraint is endearing, but extremely promising as I haven’t enjoyed a ‘real life’ killer story as I did with School Spirit since… well, high school.

There really is only one question left to answer in order to pass this slasher’s final test and the answer is pretty easy: Is the School Spirit coming for you?

Do you plan to stream School Spirit on Hulu when it hits August 2nd? Do you think it succeeds in being a true modern slasher? Share your thoughts on Into The Dark’s August episode over on Twitter, Reddit, or in the Horror Movie Fiend Club on Facebook!

TLDR Academic roles and expectations are abandoned in this new age slasher as School Spirit reports high grades in all the categories that count when it comes to the horror genre’s favorite type of murder mystery.