The COVID-19 pandemic has changed the way we consume entertainment. Instead of going to concerts, we’re watching musicians play acoustic songs in their living room. Instead of going to the movies, we’re streaming new releases at home. When it comes to film festivals, organizers had to either cancel, postpone, or adapt to this new landscape of viewing content virtually. Quebec film festival Cabane à Sang (French for “Cabin of Blood”) decided to screen their selection of shorts over two Saturdays. The shorts were either homemade in La Belle Province or sent from the other side of the planet, with qualities ranging from top-notch productions to intentional atrocious. Nothing’s too trashy or politically incorrect for this festival!

The shorts were live-streamed in blocks of two or three shorts at a time, with programmer and host Frank Appache introducing the blocks while standing in clear plastic quarantine. Appache quickly jumped back and forth from French to English—though it’s possible Appache learned his English from Samuel L. Jackson, since every second word was some variation of “mother fucker.” Viewers made a game of it, drinking every time he dropped the MF-bomb. Appache himself was getting drunk off an unknown liquid in a jar he referred to as “Sploosh juice.”

To sum up every single short that played would take ages, and some were more memorable than others, so I’ll briefly talk about the ones that left an impression on me. Although every short was different in their own way, many shared a common theme. For example, French short Under the Lather and Spanish short Room For Rent both featured a carnivorous creature lurking underneath the bubbles in a bathtub. Dumb criminals ruined their own schemes like the amateur Queb kidnappers Cucul La Praline, or the Norwegian bank robber with a slippery trigger finger in Rubbish Robbers.

Both Chateau Sauvignon and Fait Maison have bourgeois couples visiting artisan farms, only to be killed by the farmers and have their bodies ground into the products. Many other shorts were centered around culinary delights. In Pie, a housewife prepares a cherry pie, with a special ingredient—her husband’s severed genitals—and serves it to her husband’s unwitting mistress. Maneater is simply a photoshoot of old men sensually eating bananas.

“Nothing’s too trashy or politically incorrect for this festival!”

Two shorts offered a humorous meta-commentary on horror; Horrorscope is about a girl diagnosed with “Horror-Movie-Traileritis,” a disease where she’s constantly stuck in a trailer, which involves being followed by a violinist playing a high-anxiety score. The other is called Cliché, where the only way a group of friends can escape being killed by a cursed movie production crew is to go against slasher movie tropes, such as sacrificing the perceived final girl.

Shorts were shown in the form of extended exploitation trailers, some with the intention of becoming a feature in the near future, like the Australia-made The Minister and the Montreal-made The Impalers (which featured Appache as a drug dealer). Others had already pushed the limits in their trailer version with no need to stretch the concept out any farther, like Hobo Sewer Slaughter.

One advantage of making a short film is packing in a lot of action with very little build-up. Papa Wrestling has a luchador tearing apart a gang of schoolyard bullies for stealing his son’s lunch. Massacre au Débouche Chiottes 2 has a tortured prisoner savagely beating the guards with a plunger. The gore effects in both shorts are superb for their budgets. In the realm of stop-motion animation, having a short run time is very necessary, otherwise it would take years to complete. In The Animator, claymation characters get revenge on the hand that molds them. Traps and killer robots navigate through Death Maze, outsmarted by the live-action protagonist.

Appache is a filmmaker himself and screened his own short Madame Coucoune, a rather disturbing arts and crafts tutorial on how to turn a teddy bear into a fleshlight. There were a few familiar faces from time to time; Kimmy Robertson, who you might remember as Lucy from Twin Peaks, appeared in Peopling, a bizarre and gross short done with the style and color palette of a John Waters film. Montreal comedian Walter Lyng starred in Lazy Boyz, about two slackers finding a couch that turns out to be alive and very hungry. I also recognized the DIY gore effects of Camille Monette, the first person I ever interviewed for NOFS, in the outrageously goopy Gore Fest.

The two screenings would end with a block of cyberpunk-inspired shorts. The first night ended with the 20-minute long Slice of Life, which borrowed a lot of its aesthetic from Blade Runner. It was so well received by viewers that it was brought back by popular demand the second night, along with another cyberpunk short, Breaker, created by a Montrealer living in Tokyo.

Since the festival was being screened in territory few have treaded before, the team ran into the occasional technical issue. Shorts with different aspect ratios ended up being too zoomed-in, with parts of the screen cut off. Streaming on Facebook meant having to adhere to Mark Zuckerbeg’s strict guidelines, so nudity had to be blocked out with emojis in films like Moonlight People and Ro-boob: The Farting Robot. XX Virus (originally XXX Virus, with one ‘X’ removed) had to cut a few scenes too hot for Facebook, but still managed to keep the opening scene of a game of Salty Crack, and a zombie sex scene (it’s doesn’t count as nudity if the body parts are rotting away, right?). Two parts of The Procedure show a victim being strapped to a contraption that brings their face inches away from a disembodied farting butt. The Procedure 2 flew under the radar the first night, but on the second night, Facebook shut down the feed due to a single shot of a farting anus in the first Procedure. It took the team roughly ten minutes to bring back the stream.

“As if it were bad enough for the internet police to interrupt the film festival, the actual police were apparently banging on the door of base of operations…”

As if it were bad enough for the internet police to interrupt the film festival, the actual police were apparently banging on the door of base of operations to see if there were any illegal gatherings happening inside. Although Appache assured viewers that he and his team were keeping six feet apart, he became very paranoid from then on, and spoke in a hushed voice. At one point he got down to the floor and clutched a pink flamingo for comfort.

At the height of the stream, roughly 250 people were tuning in– definitely more than room capacity of the original venue. It was free to watch, but a GoFundMe was set up for anyone who wanted to donate and ensure that the festival would return next year. Of course, nothing can replace the feeling of being in a room full of people reacting to the same film, but the comment section of the stream allowed viewers to feed off each other’s enjoyment without disrupting the experience. Appache says he feels motivated by the response: “The goal is to celebrate films, and that is exactly what we aimed to do with this project,” he writes to me. “We needed this as programmers, and I think my fellow filmmakers needed this too. Especially since so much shit is getting cancelled and we all feel isolated.” The Cabane à Sang crew is currently planning another event in the next couple months, but as Appache jokes, it might have to be screened on Chaturbate to get past the censors.

Have you been attending any online screenings during these crazy isolated times we’re living? What’s the strangest, craziest, trashiest piece of cinema you’ve watched recently? Let us know all the gory details over on Twitter, in the Nightmare on Film Street Subreddit, and on Facebook in the Horror Movie Fiend Club. 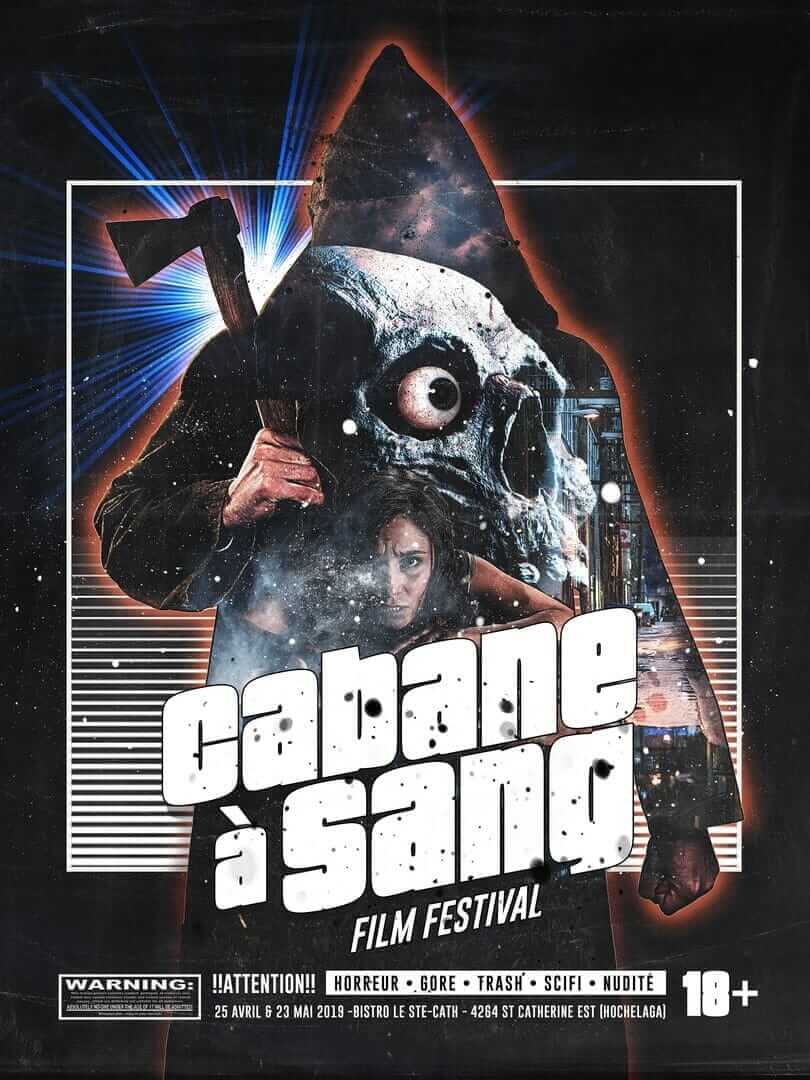