Does anything scream summertime horror better than boy-vs-evil? And I’m not talking Camp Crystal Lake massacre Friday the 13th, curling iron slasher Sleepaway Camp, or don’t go in the water ever again’s Jaws — while those are all summer staples, they have one glaring difference than the horrors many of us counted down the summer clock with. A hard R rating, and few means to procure such gruesome, summer slashery content (unless one was lucky enough to have an older sibling who could acquire set content, and also be bribed for their silence).

No, I’m talking about pre-teen summer horrors. The highly edited for content, commercial break-laden flicks we watched on the Cable Movie Channel while our mom covered the receiver in the other room, her hand wrapped around the coiled cord, and shouted, “Go play outside!”, and we continued to shrink quietly into the couch in hopes no response would result in no further intrusions. Films like Tom Holland’s Fright Night, Tobe Hooper’s Salem’s Lot, and Joel Schumacher’s The Lost Boys.

And, if mom did further intrude, our summer horror switched gears to novel form, because at least sitting outside quietly under a tree reading about ghosts and ghouls looked almost as wholesome as getting actual exercise and making friends our own age. Us outdoor indoor kids would devour RL Stine’s Fear Street, Christopher Pike, any Stephen King we could find laying around the house. If you were younger, you cut your teeth on Goosebumps, or some other Scholastic spookshow, like ‘My Teacher’s a Werewolf!‘

This is the world in which Brett and Drew Pierce’s The Wretched was birthed. A film that beats to the heart of the pre-Millenium kid who’s shoved their backpack in the dark corner of the closet, and just breathed the sandy, summer air a free man. It has all the staples; summer job at the marina (hello, do I spy a boardwalk?), first loves and teen romance, problems with dad, and oh yeah- an ancient evil living next door.

The Wretched follows Ben (John-Paul Howard), your classic teen trouble maker with a heart of gold. After some sort of mix-up with drugs, Ben’s been shipped off to his dad’s for the summer, helping out at the Marina, and solving the mystery of why the neighbour lady has maybe sort of eaten her own children. All pretty standard summer stuff, really.

While The Wretched follows all of the beats of the classic coming-of-age-at-a-the-boardwalk standard, utilizing witchy lore leads us into fresh territory. We may know the plot beats, but our villain is an absolute wildcard. She first appears scuttling across manicured lawns in the night; a shadowy figure, too veiled in darkness to discern. We know she comes from the woods, but it isn’t until we watch her drop out of the rotting carcass of a deer that we shift to the right gear. Oh gee golly, it’s about to get gruesome.

While our witch has picked a host-body in the neighbour lady for much of the film, The Wretched is eager to dole out generous helpings of their custom-curated witch mythology like an ice cream man who’s AC is working in the van. Abbie, the neighbour lady/witch husk, is portrayed wonderfully by Zarah Mahler. She’s down-to-earth as the beer-swigging young mum, and utterly terrifying as the contorting and barely human imitator. She’s commanding on screen, and though we know nothing bad could ever happen to hero Ben, her threats never feel empty. Maybe because she ate her baby. Yeah, probably that.

Once Wretched’s runtime has reached deep enough into the story to live up to its namesake, the special effects are wonderfully visceral. Practical effects were definitely high on the priority list for our directing duo, and The Wretched is a pure audience pleaser because of it. Not only does our Head Witch have some delectably disgusting frights up her sleeve, but the final act takes us somewhere equally wet, goopy, and gross as the inside of that deer carcass I mentioned earlier. It’s a teentastic misadventure worthy of comparing to the pink glowing hole in The Gate (1987).

But, while The Wretched is a perfectly fun summer screamer, it has some glaring stops that veteran horror nuts will surely nitpick. The plot doesn’t wrap or run as smoothly as its Rear Window counterpart, Fright Night — vampires are perfect for sleuthy teens as they require a full 12-hour timeout. Our hero Ben is able to pop in and out of cellars, porches, and even trespass inside the neighbours’ house, effectively pausing our villain in time. Audiences are just supposed to hope it’s all part of her master plan, or a bigger picture game of cat and mouse. When really, our Ancient being is given plenty of opportunity to snatch, kill, and bury without ever needing to leave her own property. Sorry Ben, but you should be dead.

Plot whining aside, The Wretched is an absolute blast. Come for the summer fun, stay for the body-inhabiting, baby-munching witch. Even if you aren’t nostalgic for those 60-odd days a year of summers past, you’ll still appreciate the film’s original lore, its crafty contorting villain, and an utterly perfect final shot.

The Wretched celebrated its World Premiere at the 2019 Fantasia Film Festival. The fest runs until August 1st, 2019 in beautiful Montreal, Canada. Click HERE to check out all of our continued coverage of the festival, and be sure to follow us on Twitter, Instagram, and Facebook to see silly photos, immediate film reactions, and the occasional photo of lunch. 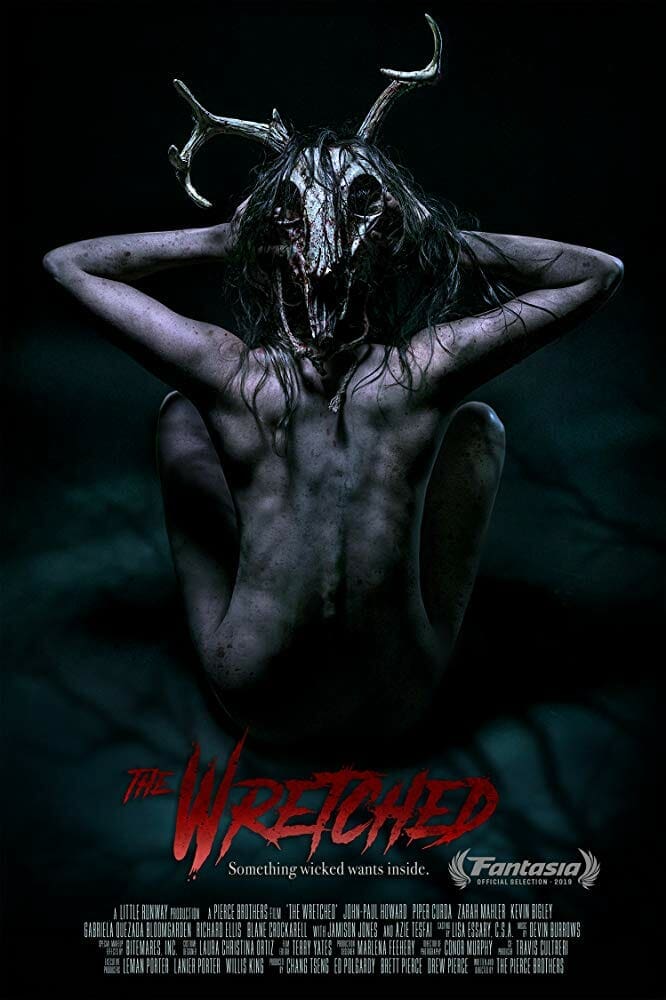 TLDR The Wretched is an absolute blast. Come for the summer fun, stay for the body-inhabiting, baby-munching witch. Even if you aren't nostalgic for those 60-odd days a year of summers past, you'll still appreciate the film's original lore, its crafty contorting villain, and an utterly perfect final shot.