When The Dead Don’t Die comes to theaters a few weeks from now, I suspect there will be a lot of similar reactions. The film, they’ll say, is a love letter to George Romero’s zombie movies. And they’re absolutely right, this movie will have Romero fans around the world singing its praises. But as I sat watching this hilarious, absurd, and irreverent zombie flick, I couldn’t help but think of Twin Peaks. It’s set a small town full of weirdos. Weirdos who have acclimated to their own strange behavior as much as the horrific supernatural events around them. That’s where the film derives its heart and its humor, and what makes it such a special entry into the zombie genre. Just like David Lynch’s television masterpiece, there’s some pretty heavy camp to this film, but not once does it take away from the craft that went into making it.

The Dead Don’t Die is set in a tiny town called Centerville, a “Real Nice Place,” as the town’s welcome sign ominously proclaims. Our protagonists are Centerville sheriffs Ronnie (Adam Driver) and Cliff (Bill Murray), two cops with not much to do. Along with their coworker Mindy (Chloë Sevigny), they are more accustomed to dealing with local shenanigans than they are real danger. Unfortunately, the dead are about to rise, and these unassuming officers may be the only thing standing between Centerville and a very gory apocalypse. 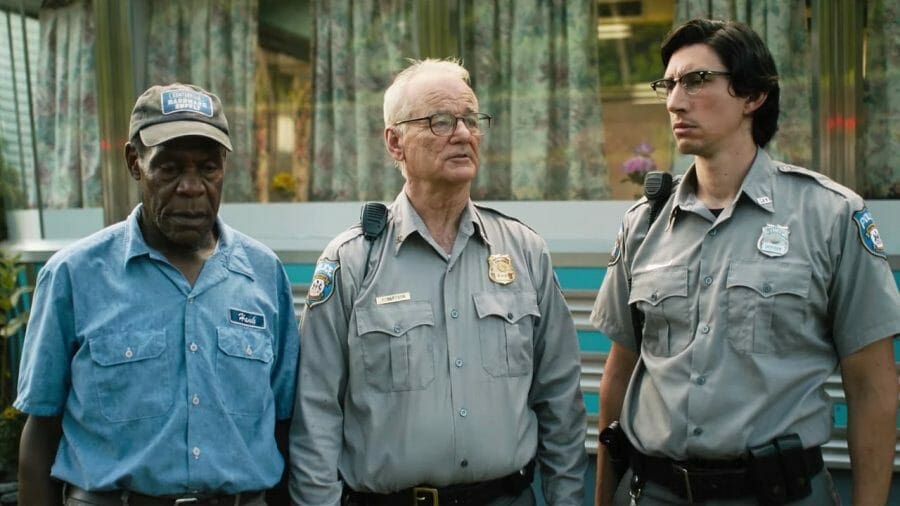 If you haven’t already gathered, the best part of The Dead Don’t Die is its all-star cast. Murray and Driver are a brilliant pair of lackadaisical law enforcers, two peas in a pod that react just a little too calmly to the end of the world. Playing opposite both of them is Sevigny, reacting to their horrible situation with the same terror you and I would feel amidst an undead revolution. Their dynamic is hysterical, establishing the movie’s tone early on and providing a meta “the characters are the audience” viewpoint for the movie’s action. If The Dead Don’t Die only consisted of their scenes together, it would still absolutely be worth the ticket price.

However, those three are only a fraction of the incredible cast. The credits of The Dead Don’t Die looks like the guest list to the best Oscars after-party to ever exist, containing some of the most talented and hilarious folks in movies today. Steve Buscemi appears as Farmer Miller, a Trump-supporting, crotchety old fart who is thoroughly unlikeable as a character, but hilarious on-screen. Tom Waits is Hermit Bob, an anti-society loner who both sees the zombies coming and is probably the most adept to deal with them. Other names like Selena Gomez, Danny Glover, and RZA also show up in the title credits, each providing some weird character to round out the already strange world of The Dead Don’t Die. And even with all these faces showing up, Tilda Swinton still manages to dominate the scenes she’s in as Zelda Winston, a Scottish, katana-wielding mortician with a truly surprising secret.

“[The Dead Don’t Die finds] an honest and entertaining way to breath a little fresh air into a genre that needed it. “

With all these talented people playing all of these oddball characters, The Dead Don’t Die has a chance to showcase a zombie apocalypse truly unlike the one we’ve all become so familiar with. After all, in a town so used to weirdness, the zombie apocalypse is just another strange occurrence that the populace has to deal with. They skip over the “zombies can’t be real” phase of so many zombie movies, jumping right to the reality of the attack and what they can (try to) do to beat it back. Besides the cast itself, this was probably my favorite aspect of the film. It found an honest and entertaining way to breath a little fresh air into a genre that needed it. Actually, I would recommend this movie to anyone who’s gotten bored with the zombie genre. It might not be enough to resurrect your interest in it, but you’ll at least recognize it as something different.

However, I do think this movie might disappoint people coming to it purely for a horror experience. Though there are some genuinely unsettling moments involving children zombies, the focus of this movie isn’t on the actual scares. It is surprisingly gore-free for a zombie movie, and there’s hardly a jumpscare in the storytelling at all. I don’t think this detracts from the overall movie, but I do think one or two zombie fanatics will leave the movie feeling a bit underwhelmed. Still, as I mentioned before, this movie has plenty of easter eggs for fans of zombie and b-horror movies in general, so perhaps that’ll be enough to satiate even the folks looking for some good horror.

As I write this review, I get the sense that The Dead Don’t Die is headed for cult status, just like the aforementioned Twin Peaks. And of course, the callbacks to classic zombie flicks, the humor, and the stellar cast all contribute to that. But I think at the heart of those, indeed, at the heart of every cult movie, is something a little bit harder to write about in a review. And that, of course, is love. Director Jim Jarmusch loves B-Horror zombie flicks. He made lovable characters that lovable actors clearly loved playing. And no matter what you think of zombie flicks, no matter how well you think the humor lands or the plot develops in this movie, I have a serious problem believing you won’t love it, or some part of it, as well. The Dead Don’t Die hits theaters everywhere on Friday, June 14th.

For more summer horror reviews, make sure you keep an eye on our Facebook, Instagram, and Twitter pages. Without those pages, you might miss spectacular reviews like Jessica Rose’s look at The Blackcoat’s Daughter, or Joshua Anderson’s great breakdown of the very seasonal Slasher: Solstice. For more reviews like these, and all your horror movie news and interviews, keep lurking at Nightmare on Film Street.

TLDR Callbacks to classic zombie flicks, humor, and especially a stellar cast guarantee THE DEAD DON'T DIE cult classic status, not to mention a lasting place in the zombie genre.