[Review] Zombie film DEAD TRIGGER is All Brains, No Bite 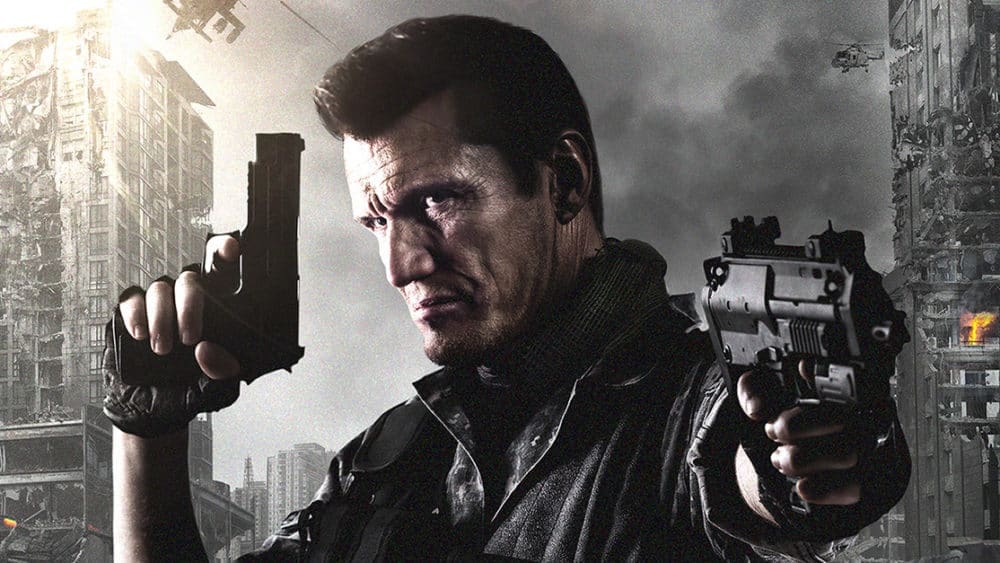 Dead Trigger (aka Dead Trigger: Unkilled) is an alleged and rather late adaptation of the zombie-themed first person survival horror video game of the same title, released in 2012 for iOS and Android by Madfinger games. It stars Dolph Lundgren as battle-hardened soldier Kyle Walker, sporting his 1989 The Punisher black style hairdo.

I say ‘alleged,’ as this abysmal knock off of any other zombie film you’ve seen in the past twenty years only has a the slightest, tiniest and minutest relation to the video game. The only correlation between the film and the game is the name alone.

The synopsis tells us that we’re in the year 2021 – five years after an outbreak of unknown origin, a virus has turned humans into ravenous, flesh hungry zombies and much of the world’s population has been decimated. The Contagion Special Unit (or CSU) is formed with the toughest soldiers and best specialists to fight the infected. Because of the rapidly decreasing number of soldiers, a popular online video game called Dead Trigger that mirrors the terrifying events is created. The best efforts of the gamers are monitored by the CSU who recruit the highest rated zombie killers. The young recruits are called “Dead Triggers”. The movie follows a group of young recruits who must travel to the origin of the outbreak to find a missing team of scientists who were searching for a cure.

Initially, I was intrigued by this concept. I was looking forward to something in the same vein of the 2009 Gerard Butler action film Gamer, however I was sorely disappointed. Because there is no government video game. There’s a scene where the main ‘rookie’ Chris puts on a VR headset, but that’s pretty much it. We’re treated to Starship Troopers mock-ads, telling us that the CSU WANTS US! to join in with the zombie invasion, but it lacks the satire that made Paul Verhoven’s 1997 bug blaster so successful. Teenagers are basically recruited into the army and given a Full Metal Jacket style training segment which leads to a few deaths in a woeful attempt to create a sense of…pathos/humour? I wasn’t quite sure, as Dead Trigger is not played as a comedy. It feels as though the initial script may have had some kind of message about the military using video games on soldiers to improve reflexes and hand-to-eye coordination, but then ten minutes into proceedings someone decided to junk that and turn it into a dull, clichéd counter-check of every zombie film you’ve ever seen. 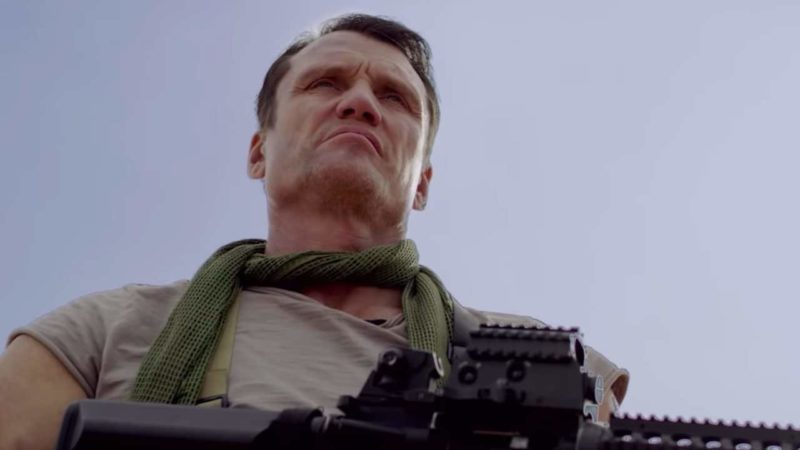 Dolph Lundgren drawls throughout with bombastic, tough guy, B-movie action hero flavour, and if you’re a fan of his work you’ll be getting the same type of Lundgren from any of his 80’s protagonists. But it is a bit strange to think that only last year he was in Aquaman and Creed 2. Guess that’s how the dice rolls sometimes. Here, he’s playing the same type of role in the low-budget Battle of the Damned (2013), which had zombies…but also killer robots. The extremely low-budget on offer here is evident throughout, with fake looking CGI blood (it’s one thing to have CGI gun shot blood splatters and muzzle flashes in an independent film, but close-combat knife CGI blood splatter is just lackluster) and most of the scenes take place in abandoned-looking buildings. The acting can be cringe worthy to witness, and on some occasions I found myself wondering if the actors had only read their lines a few seconds prior to the director shouting ‘Action!’

It’s a shame as Isaiah Washington (Grey’s Anatomy) is also involved into the mix, but is given little to do and little to say. Oleg Taktarov (Predators, Righteous Kill) also adds some beef to the action, but ultimately the plodding script that lacks any tension makes his (SPOILER!) betrayal in the third act predictable. However, the most heinous of crimes was a short scene involving the ‘Government Big Bad’ woman talking on the phone. If you look closely, it’s obvious she doesn’t even have a phone in her hand, but a transparent cover case for the phone…I wasn’t sure if they were trying to go for a futuristic looking device, and forgot to add the effects…but it was abundantly clear that she was simply talking into the cover case. It just looked like a rehearsal scene and the film makers decided to use that shot. The zombie make-up looks cheap and only a few extras stand out with gaunt-looking features.

They have a super-zombie (Subject Zero) which made me think that we’d see some other mutated creatures later on…but this wasn’t to be. Dead Trigger is co-directed by filmmakers Mike Cuff and Scott Windhauser. When I looked into the making of this film, a few things interested me. Most notably, according to Deadline, there were a few problems onset. Crew weren’t paid, the original director was replaced.. and they got chased out of Mexico by drug cartels for not paying their Mexican crew! It may explain why the plot seems to be a bit of a mess. Perhaps they were making things up as they shot.

Overall, Dead Trigger seems like a missed opportunity. If this was played as a satirical or even a comedic zombie film, I think they would have had more wiggle room to play around with things. There’s really little to recommend it aside from the addition of Dolph Lundgren (if that’s your bag.) It lacks any kind of excitement or thrills and brings nothing new to the genre. One to miss.

Dead Trigger is out now on VOD. Have a different opinion? Sound off with the Nightmare on Film Street Community over on Twitter, our Official Subreddit, and the Horror Movie Fiend Club Facebook Group! 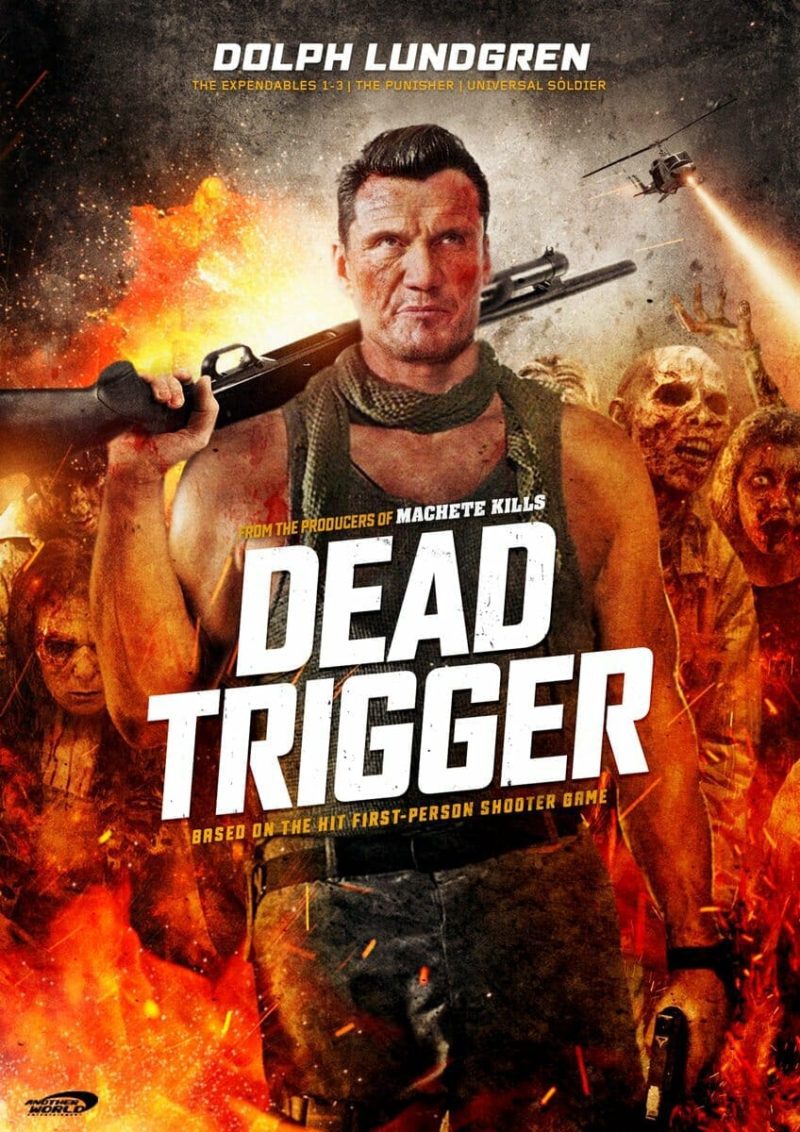 TLDR: Dead Trigger seems like a missed opportunity. If this was played as a satirical or even a comedic zombie film, I think they would have had more wiggle room to play around with things. There's really little to recommend it aside from the addition of Dolph Lundgren (if that's your bag.) It lacks any kind of excitement or thrills and brings nothing new to the genre. One to miss.