Welcome to Saturday Morning Scares, where we take a look at horror TV shows for the little monsters! In keeping with this month’s Enchantment Under the Sea sea monsters-or-high school dance theme, today’s show is Gravedale High. It’s a slice-of-death dramedy starring the most likable actor on earth, Rick Moranis!

Originally airing in the fall of 1990, Gravedale High (sometimes called Rick Moranis in Gravedale High) was a Hanna-Barbera production created to deliver Saturday morning to Rick Moranis. It wasn’t a huge hit, only lasting one season, but I think it holds its own among the other cartoons of the day. Plus, the series capped at 13 episodes, the spookiest length it could have!

“Gravedale High [is] a slice-of-death dramedy starring the most likable actor on earth, Rick Moranis!”

In Gravedale High, Moranis voices a teacher that’s been brought in to deal with a class of misfit mutant monsters. In many ways, it’s like Welcome Back Kotter if Barbarino was a Dracula. If that sentence resonated with you, you are legally required to be my friend. 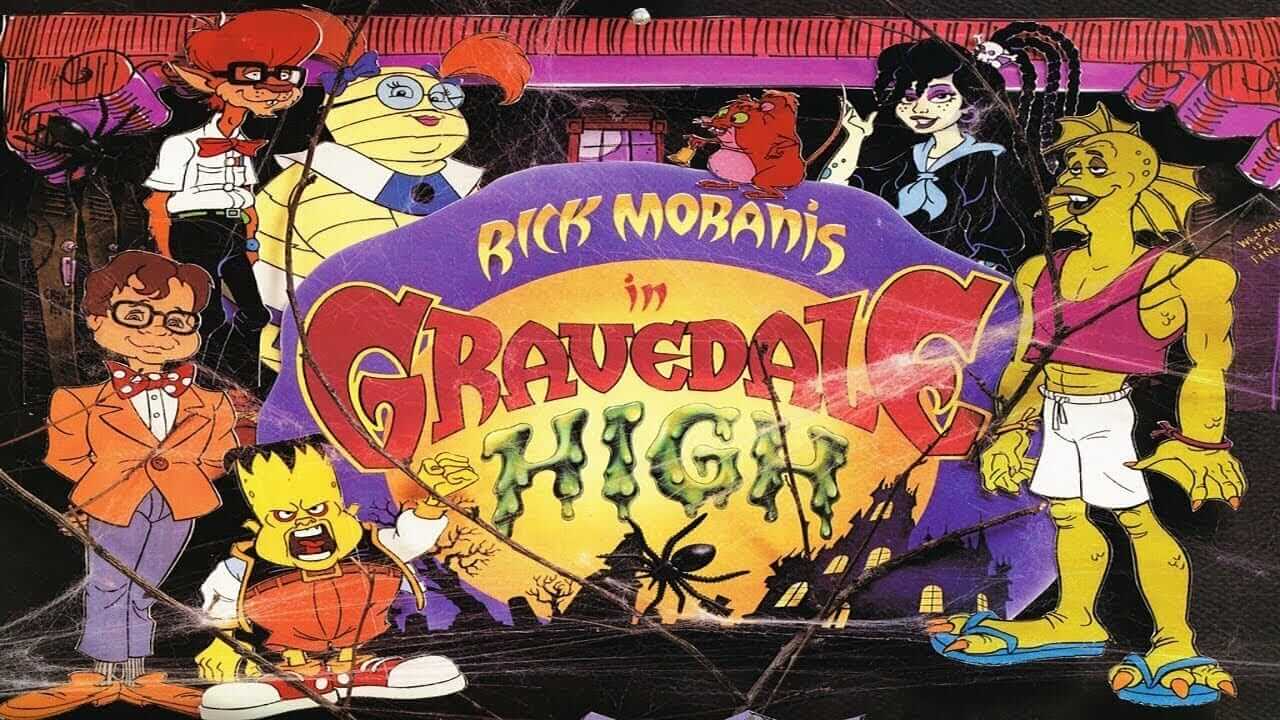 The characters of Gravedale High are your standard assortment of Halloween beasties, joined by Rick Moranis. Interestingly, his character looks like a cartoonized version of Moranis, and his name appears in the full title, but he plays a different character. The show could have just said, “Rick Moranis exists in this show’s universe, and he teaches at a monster school,” but they chose not to. Anyway, here’s a rundown on the main characters of Gravedale High!

Max Schneider: The star of the show, voiced by Rick Moranis (Ghostbusters, Little Shop of Horrors). He’s the teacher of the misfit kids, with a seemingly endless supply of patience. He’s the only human at Gravedale, which gets him into several sticky situations.

Sid the Invisible Kid: The class clown, a guy who does like four impressions but he does them constantly. These impressions are Robin Williams, Michael Jackson, and a generic mob guy. Monster math is hard. Voiced by Maurice LaMarche (Egon in both Ghostbusters cartoons).

“…like Welcome Back Kotter if Barbarino was a Dracula.”

Gill Waterman: The surfer dude from the Black Lagoon, Gill is always on the hunt for the next big wave. Every cartoon from this era had a surfer dude character, and they all sounded exactly the same. Not a complaint, just an observation. Voiced by Jackie Earle Haley (Freddy Krueger in the Nightmare on Elm Street remake)

Duzer: a Valley Girl Medusa, quick to dispatch her catchphrase, “Get A Life.” She’s a bratty diva, which is a pretty sweet gig in a cartoon but hard to pull off in real life. Voiced by Kimmy Robertson (Twin Peaks).

Cleofatra: Probably wouldn’t be on the show if it were made today. She’s a mummy whose whole thing is that she eats too much. Voiced by Ricki Lake (Cry-Baby).

Frankentyke: A little Frankenstein-kinda guy. After Bart Simpson became an American icon, every cartoon needed to have a Rude Dude with ‘Tude. Frankentyke is that, but without the charm. He does play a mean guitar solo, though. Played by voice legend Frank Welker (Fred from Scooby-Doo, also sometimes the voice of Scooby-Doo).

J.P. Ghastly, III: This guy is barely in the show, and I can’t tell what he’s supposed to be. Some manner of ghoul, perhaps? Also voiced by Frank Welker.

Blanche: A Southern belle who just so happens to be a zombie. She’s a shopaholic who knows her way around a spice rack, and she’d be a good Halloween costume if I thought that anyone would get it. Voiced by Shari Belafonte (Beyond Reality).

Reggie Moonshroud: A werewolf, and a total nerd. I guess that’s him playing against type, but he’s pretty annoying. Voiced by Barry Gordon (Donatello on Teenage Mutant Ninja Turtles).

Vinnie Stoker: The Coolest Dude Ever, and I’m only being slightly facetious. He’s the aloof rebel without a cause, a vampire, and he wears a leather jacket with the number 13 on the back. When he wants, he can make bat wings appear. Voiced by Roger Rose (Friday the 13th 6: Jason Lives).

The Gravedale High theme won’t send you running for Spotify, but it does its job. It sounds pretty much like every late 80s- early 90s cartoon theme, but with spooooooky synthesizer lines. For this, I rate it a SLAP.

Since there are only 13 episodes of Gravedale High, it’s not unreasonable to watch the entire series. Nevertheless, here are my picks for the best episodes:

Do the Rad Thing: Gill is supposed to teach Frankentyke how to surf, but he gets sidetracked when he meets the most primo radical surfer dude in history, Kahuna Bob. Before long, Gill’s skipping school to ride the waves and barely seeing his little buddy anymore. Can Mr. Schneider put everything back on track?

Monster Gumbo: The students are raising money for charity, and Blanche’s secret family recipe for Monster Gumbo is a runaway success. It’s not long before trouble rolls into town, looking to crack the secret!

“Monster Mash is a delicious breakfast containing two servings of fruit* and 75% of your daily recommended marshmallow intake!”

The Grave Intruder: When the class is tasked with running the school paper, editor-in-chief Duzer takes some creative liberties. When her tabloid rag is a huge hit with students and faculty, she has to deal with the repercussions of making up news stories.

Night of the Living Dad: The Gravedale High talent show is coming up, and Frankentyke doesn’t want anyone to meet his embarrassing dad. He concocts a scheme to make a new dad, with unmanageable results. This episode features one of the best television tropes, where all the characters start a band (see also: The Archies, Jabberjaw, the Ninja Turtles Coming Out of Their Shells Tour).

For Gravedale High’s Crunch Time Cereal Pairing (a Nightmare on Film Street exclusive), I recommend Monster Mash. This one takes a little bit of prep, but bear with me. To make Monster Mash, combine equal parts Count Chocula, Frankenberry, and Booberry into a bowl. Add the milk of your choice and enjoy! I picked Monster Mash to keep with the show’s theme of putting a bunch of monsters into one small space and hoping for the best. Monster Mash is a delicious breakfast containing two servings of fruit* and 75% of your daily recommended marshmallow intake!

*Not sure if Frankenberry and Booberry are fruits, Wikipedia didn’t have a definitive answer.