It was a huge surprise to me that Travis Steven’s sophomore feature Jakob’s Wife was a gattdang vampire movie! Starring genre legends Larry Fessenden (Depraved, Habit), Bonnie Aarons (The Nun, I Know Who Killed Me) and Barbara Crampton (Chopping Mall, Sacrifice) in what I think might be her most kickas role yet, Jakob’s Wife is a super fun blood-spattered vampire movie with rad practical effects and a vampire that would make Nosferatu swoon.

After small-town preacher’s wife Anne Fedder (Crampton) is attacked by a vampire, she must decide whether to simply ease back into the quiet, obedient role she’s played all her life, or blaze a new trail as a bloodsucking vampire. We sat down recently with co-writer & director Travis Stevens (The Girl on The Third Floor) ahead of the film’s world premiere at SXSW 2021 to chat about re-imaging cinema’s most iconic vampire, why practical effects are the gnarliest, and how Barbara Crampton is the ultimate badass.

Jonathan Dehaan and Kimberley Elizabeth Nightmare on Film Street: We didn’t know this was a vampire movie and it was wonderful watching it [unfold].

Travis Stevens: It was definitely important to keep that secret until people like yourselves could see it. […] We’ve been talking around it for a year so it’s nice to actually be like, “Yeah, it’s a motherfucking vampire movie!” [laughs].

TS: Yeah, the primary objective with this movie was to give Barbara a movie where everybody could see what a great performer she is and so that started at the script stage of really just trying to put in moments there that we got to see her in a different way than we normally do. I think both her and Larry, later in their careers, they sort of come into horror movies and they do one thing. The movie only asks of them 1 thing. Come in and play that cowbell- ding, ding, ding, ding, ding- and I was like, ‘Alright, we’re gonna give them this movie where they get to guitar solo the entire movie’. With Barbara that was finding iconic moments, basically, movie moments that she could really flex.

NOFS: And not even just as Barbara Crampton but as a female actress above the age of thirty, there are no roles like this and it’s just so refreshing to see a story about a marriage that’s 20 years in.

TS: Yeah, and this was all in the original screenplay by Mark Steenland and Barbara had found it 5 years ago. It won an award at Shriekfest and the festival director was like, ‘Hey, this might be a good movie for you,’ and Barbara read it was like ‘Oh yeah! Yeah, this could be great’ and she spent a few years trying to get it made. When I read it I was like, ‘This story mirrors your life both in your relationship-‘ you know, she’d been married for thirty years, she had stepped away from her career to focus on raising kids and then got back into acting- but also her professional life. When she sent me the script she was trying to develop as a producer more and I was like, ‘Oh, there’s this nice correlation between what this character goes through and what you’re going through in your life. Let’s focus the screenplay on that. Let’s bring your truth, your experience into this more, get rid of some of this other stuff and really focus on it’.

As that conversation was happening- and not to sound pretentious but- we were looking at movies like A Woman Under The Influence with Gena Rowlands and Alice Doesn’t Live Here Anymore with Ellen Burnstyn, An Unmarried Woman with Jill Clayburgh and bring like, ‘There are these great movies about women on the sort of, 2nd act of their lives and let’s try and bring more of that energy into this wild crazy 80s horror movie. There aren’t a lot of movies that are sort of like, ‘Hey, you’re of this age and we’re going to make a movie about being of that age and looking back’.

“…part of the process was looking at the movies in this particular subgenre and trying to honor them and also do some new stuff with the subgenre.”

NOFS: It’s such a huge emotional experience, it’s crazy that it’s almost ignored, and it’s such a great venue to explore with a horror movie. Nosferatus, in particular.

TS: I think the same thing with Larry- you know, he burst onto the scene with this alt-vampire movie Habit and that idea of bringing him back to this movie to play a totally different type of character who witnesses somebody else going through a transformation was a lot of fun. I think part of the process was looking at the movies in this particular subgenre and trying to honor them and also do some new stuff with the subgenre. And the fact that they’re an older couple and they’ve been married for so long and they are experiencing this subgenre together is where a lot of the comedy in the movie comes from.

NOFS: And the design you choose for the vampires is pretty great, I mean, I gotta give ya a small round of applause for sticking with the original Nosferatu teeth.

TS: I think with all of thism you try to honor the classics and then you try to put your twist on it. I think in the original script that character had been a good looking male, traditional- ‘Come in, join me, let’s go live together in my castle,’ and I was like, that kind if undermines the character a lot because it’s saying replace this with something new instead of discovering your own voice. Changing the gender of the character changed that entire dynamic, then the conversation would be about, ‘You don’t need this guy. You don’t need me either. You just need you. Do what you want to do,’ and because that was happening it was like, ‘Oh, now it would be kind of funny to still harken back to the original look that we associate [vampires with]. Bonnie Aarons did an incredible job with the character and I think Marcus Koch and Jessie Seitz really brought the makeup design.

NOFS: There’s an insane amount of blood in this movie too, which is pretty great. I also love that you take any opportunity to shoot it directly at the camera!

TS: I love it [but] everybody working on the movie finds it a pain in the ass. People don’t seem to understand that when I say “a lot”, what I mean by a lot is a lot more than most people define “a lot” by, so Marcus always had to design these special cannons to really just blast this stuff and everybody gets hosed down. Again, with that ‘how do you bring something new to this subgenre’ I was like, ‘I want them to be giddy like dogs with a garden hose, like, AHHHHHH I LOVE THIS!’ We’ve certainly seen the more surgical, sensual vampire before. Our movie is more, uh…..passionate [laughs].

NOFS: This is only after two movies but I can’t help but notice that your films have really “squiggy” practical effects. First, the marble traveling up the skin in The Girl on The Third Floor and now the pulsing vampire bites of Jakob’s Wife, which feels pure Videodrome to me. Is it too soon to call these a Travis Stevens staple?

TS: Yeah, I guess it’s part of my vocabulary because I’m often sexualizing practical effects applications, where I’m like, ‘It should look like an orifice’ because it makes it more fantastic. Not Gigeresque but there’s this sort of human quality to the actual physical effects. That sounded really weird but that’s the way my brain works. Like, “Yeah, yeah, yeah- vampire bites but also they kind of look like wounds that you could finger [laughs].

“[….we] had to design these special cannons to really just blast [blood] and everybody gets hosed down.”

NOFS: Well, also, vampire bites aren’t really explored beyond the first act of any story. It’s like, here’s the sign of a vampire, and then they’re forgotten but the fact that she revisits it is something fresh and completely new.

TS: Yeah and, not to get too much into it but, this is one of the first scenes where she’s starting to feel the transformation and The Master is basically saying, ‘Yeah, you feel that? Feel yourself. Feel it.’ and so she physically feels it and it leads to the next scene where she fully embraces her sense of self and her touch and what it feels like to feel good, and for your body to feel good. So there’s a logic behind these weird choices that I don’t know if the audience will get but if they [read] this they’ll go ‘oh, okay- I can see that that makes sense to that person at least’.

Travis Stevens’ Jakob’s Wife celebrated its World Premiere at the 2021 SXSW Film Festival and will be available in Theatres, On Demand, and Digital April 16th. Click HERE to follow our full coverage of the festival and be sure to keep an eye out for our full, extended chat with Travis Stevens on the Nightmare on Film Street Podcast next month! Let us know if you’re excited to check out this nosferaturrific vampire story over on Twitter, Reddit, Facebook, and in the official Nightmare on Film Street Discord. Not a social media fan? Get more horror delivered straight to your inbox by joining the Neighbourhood Watch Newsletter. 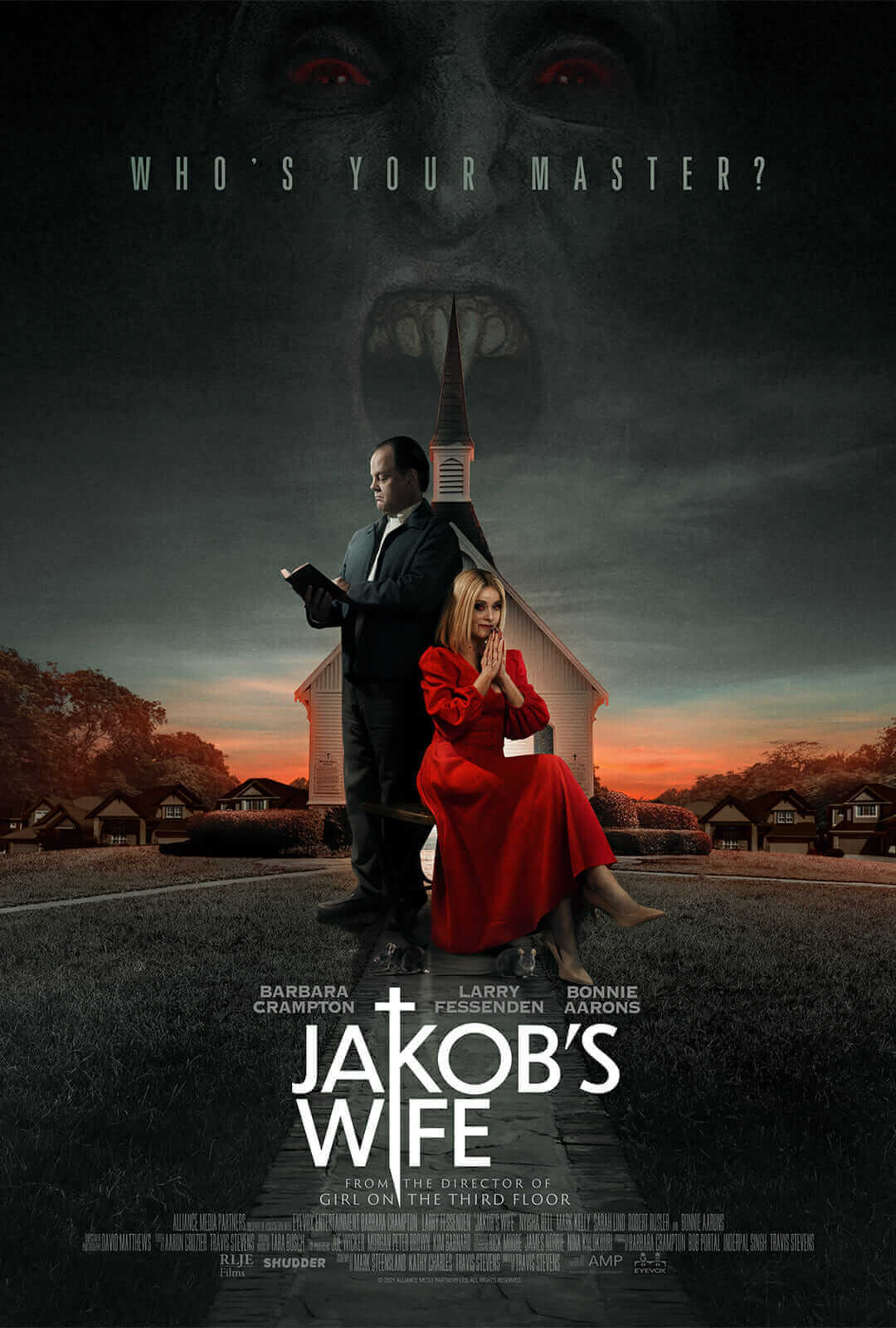