[#TIFF21 Review] You Don’t Have To Know A Damn Thing About DUNE To Like DUNE. Take It From Me, A Lifelong DUNE Avoider 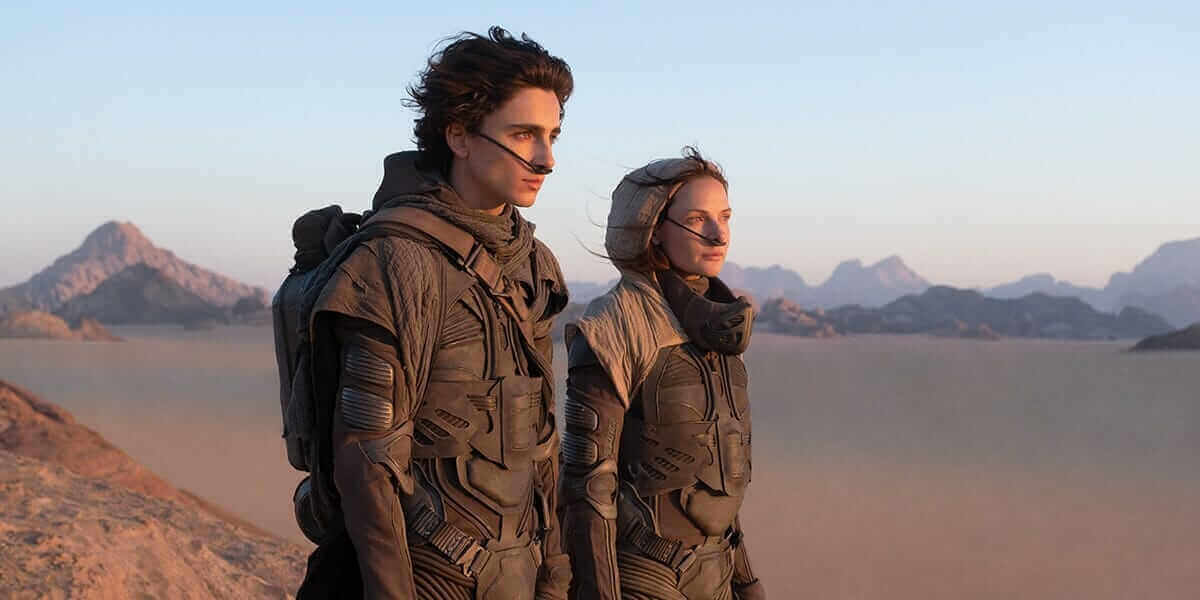 If you haven’t read Frank Herbert’s Dune books and you don’t think you’re the target audience for Denis Villeneuve’s Dune, this is the review for you. I don’t like epic stories, I’m not nuts about hard sci-fi/medieval stuff/fantasy, and I’ve been dodging my friends’ constant appeals to read the books for years. But here’s the thing…I really dug this dang movie. I don’t know if it was the IMAX presentation, the sly simplification of Herbert’s complex world, or the half an edible I had before going in but I enjoyed the heck out of this $165 Million sci-fi spectacle.

You’ve likely heard by now that Dune is, in fact, Dune: Part One. That was an immediate bummer for me, personally, but it is pretty apparent even in the first ten minutes of the movie that trying to stuff this entire saga into one film would be a nightmare (see: David Lynch’s Dune). On the plus side, Dune is also a perfect candidate for the mini-series/multi-season approach, so we should all thank our lucky stars that we aren’t about to get saddled with yet another overly elongated adaptation.

“Rest assured that Dune (the film) is not the impenetrable fortress you’ve always assumed Dune (the book) to be.”

So, what’s Dune about?  It might be easiest to think of it as a cross between Star Wars and Game of Thrones. It’s very political and builds like a game of chess, but it also has giant people-eating sandworms, Stellan Skarsgård (The Girl With The Dragon Tattoo) levitating in a fat suit, and Jason Momoa (The Bad Batch) as an absolute badass. TLDR; There’s an inhospitable planet where future civilizations harvest an expensive spice used for interstellar space travel. Everyone’s willing to kill for control of this planet, but it’s also inhabited by a group of nomadic desert people that use the spice for its hallucinogenic properties (like peyote or magic mushrooms). These natives also believe in a “chosen one” that will one day free them from their oppressors and (surprise, surprise) the son of their new leader just may be the savior they’ve been waiting for.

I’m sure a lot of that sounds familiar. You could even argue that it’s a copy+past “hero’s journey” story like any other multi-million dollar blockbuster. It’s more likely that Frank Herbert’s novels have influenced large-scale storytelling over the last several decades but who cares what came first. This is a story structure that you are already familiar with. Swap out the words “Jedi Council” for “Bene Gesserit” and “House Lannister” for “House Harkennon”, and you’re nearly there. 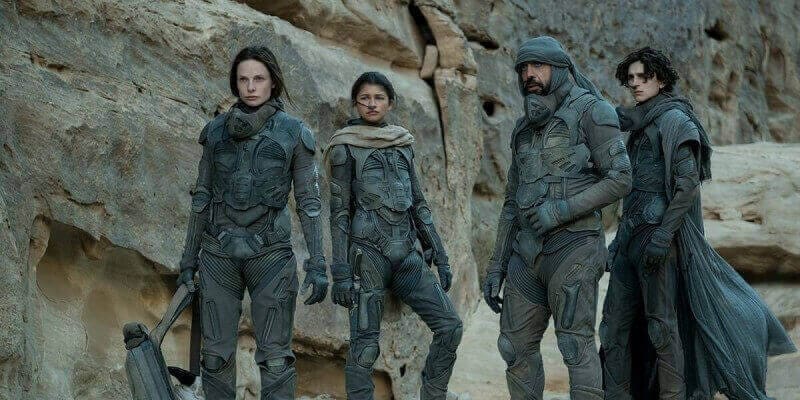 So why should you see Dune? More specifically, why should you see Dune if you’re the kind of person who doesn’t think it’s going to be their cup of tea? Well, for one thing, it’s surprisingly easy to follow. Hearing my friends get lost in the minutia of Dune’s philosophies has always been a challenge for me (and if there’s one thing I hate about hard sci-fi and fantasy it’s having to learn a whole bunch of new words) but I promise you won’t get lost in made-up junk for the sake of made-up junk. Call me dumb all you want, but I don’t think you should be given a glossary to study before seeing a movie. I think you should be able to sit down with no prior knowledge and enjoy it as much as someone who’s steeped themselves in the original books.

IMAX is really the format you want to see this movie in if you aren’t a Dune diehard. There are a few aspect ratio changes that are a little jarring but it really, really helps sell the appeal of this world. It’s vast, it’s expansive, and it’s got one hell of a soundscape, not to mention a booming score from Mr. Boom Score himself, Hans Zimmer. You really want the best sound system you can get your ears in front of to really take this all in. It’s like listening to a symphony orchestra. They sound great on bose speakers but they sound unreal live and in-person.

“[a] seamless blend of practical and digital elements.”

Greg Fraiser’s cinematography is gorgeous but, visually, its most impressive quality might be its seamless blend of practical and digital elements. You really can’t tell where the hand-crafted landing gear ends and the manhattan-sized spaceship begins. It’s the kind of movie that is likely to sweep the more technical awards at the Oscars, including costuming because it’s a period piece through and through. The period just happens to be 10, 191 AD.

Rest assured that Dune (the film) is not the impenetrable fortress you’ve always assumed Dune (the book) to be. Complex characters with lifetimes of backstory and motivations are reduced down their most essential exchanges from an all-star cast including Rebecca Ferguson (Doctor Sleep) Timothée Chalamet (Call Me By Your Name), and Oscar Isacc (Ex Machina) sporting a beard that could stop traffic. As was the case with Game of Thrones, we’re just scratching the surface with this handful of names. There’s a whole host of secondary characters sporting cool tech, mean mugs, and funky blue eyes including Javier Bardem (mother!), Josh Brolin (Grindhouse: Death Proof), Zendaya (Spider-Man: Far From Home), and Dave Bautista (Army of The Dead). 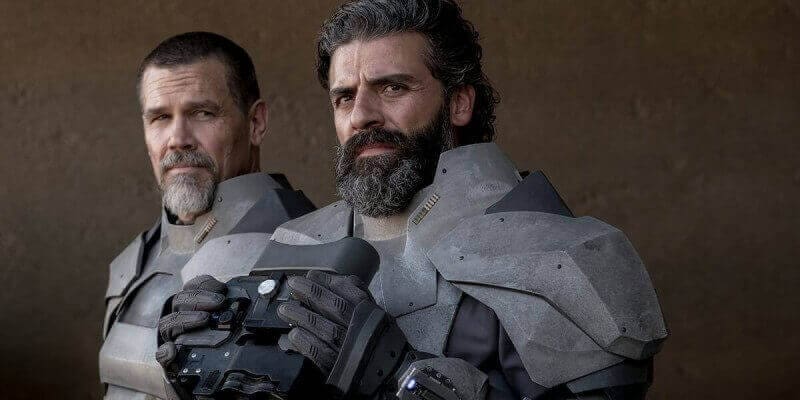 My appreciation of Dune flies in the face of every algorithm known to man. On paper, this is not a movie for me. Hard sci-fi with interstellar political sabotage? Pass. Secret societies with superpowers and a teenage christ figure? That’s gonna be a no from me dawg. But I’ll be damned if I didn’t have a blast watching all 2 hours and 40 minutes of it.

On the surface, it’s a space opera about destiny, but woven in that familiar framework is a philosophical discussion about the dangers of savior figures. Or at the very least, that’s what it’s selling hard for its second half. Dune was long assumed to be an unfilmable novel but here we are. And having never read a word of that novel, I feel unapologetically confident that these two films are the only adaptation of Frank Herbert’s celebrated classic we’ll ever need. It’s gloomy and it’s doomy, but it’s also hard sci-fi made easily digestible.

“…the only adaptation of [Dune] we’ll ever need.”

Denis Villeneuve’s Dune celebrated its North American premiere at the 2021 Toronto International Film Festival. Click HERE to follow our full festival coverage and be sure to let us know if you’re excited to see Dune (and feel to make a case for why I should finally read those damn books) over on Twitter, in the official Nightmare on Film Street Subreddit, and on Facebook in the Horror Movie Fiend Club! TLDR My appreciation of Dune flies in the face of every algorithm known to man. On paper, this is not a movie for me. Hard sci-fi with interstellar political sabotage? Pass. Secret societies with superpowers and a teenage christ figure? That's gonna be a no from me dawg. But I'll be damned if I didn't have a blast watching all 2 hours and 40 minutes of it.

Adaptation For The Uninitiated