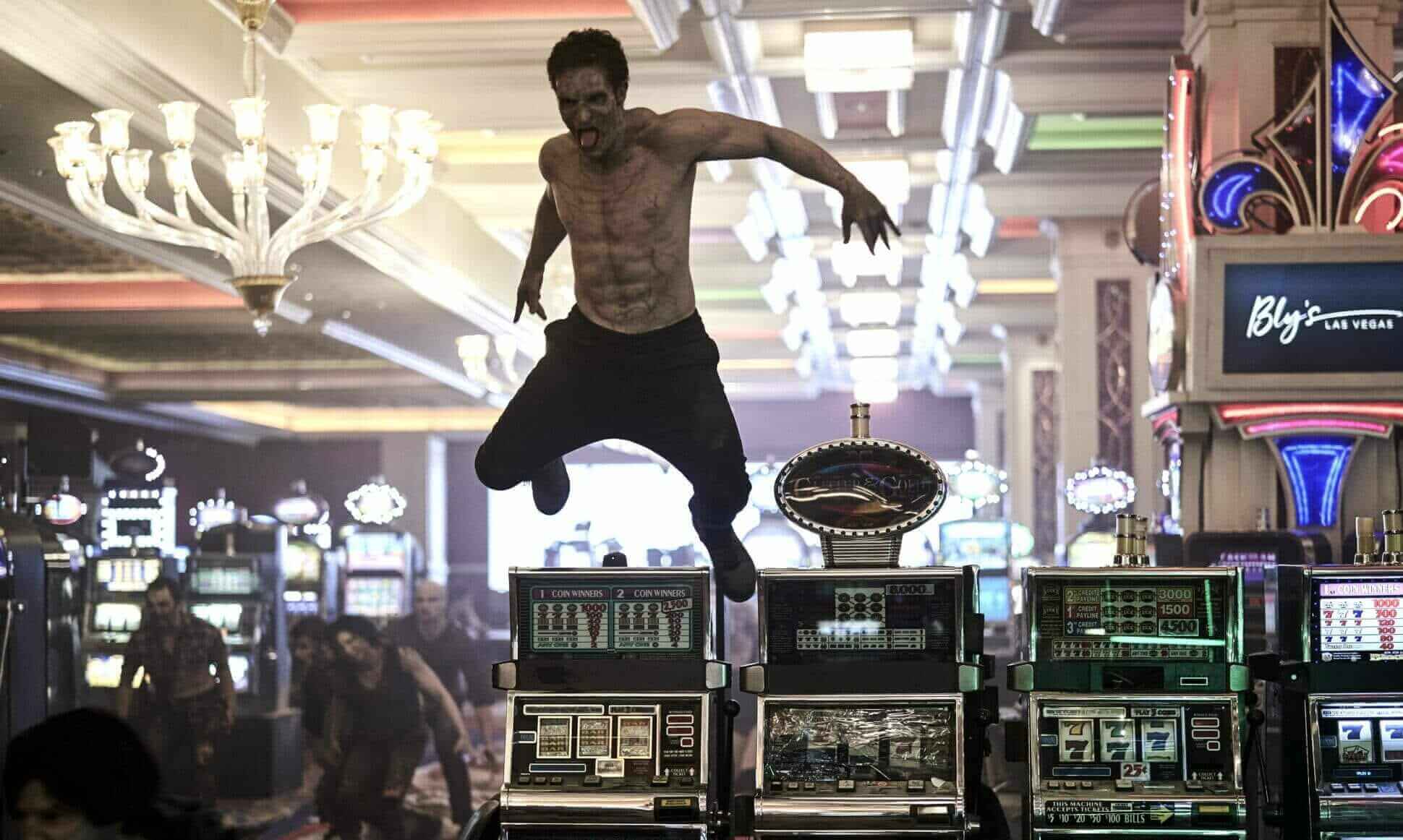 It should come as no surprise that Zack Snyder can direct the f*ck out of a zombie movie. His debut feature Dawn of The Dead (2004) introduced the world to his unique style and he’s finally back in the brain-eating business with Army of The Dead. And brother, business is a boomin’. Streaming exclusively on Netflix, Army of The Dead is a brain-splattered heist film set behind zombie enemy lines in a post-apocalyptic Las Vegas that has been quarantined and bombed to hell after an outbreak of the undead decimated the entire city. Dropping into the city just 36 hours before a nuclear warhead is set to turn the strip into dust, our ragtag band of mercenaries set out to steal $200 million from a casino vault deep in the middle of the zombie-infested wasteland. Easy, peasy, fingers-crossed you’re-not-ripped-apart-by-ghouls squeazy.

If there’s one thing you want to see at the beginning of a zombie movie it’s a large group of characters because the more the scarier, right? A stacked roster is a must for any zombie flick with a high body count because somebody has to be turned into an all-you-can-eat human buffet and I’m not picky about who’s on the menu. Our musclebound crew of kickass mercenaries includes wise-cracking helicopter pilot Marianne Peters (Tig Notaro), a slight neurotic safecracker named Dieter (Matthias Schweighöfer), a cement saw-wielding fighting machine named Vanderohe (Omari Hardwick), local zombie-killing influencer Mikey Guzman (Raúl Castillo) and his bestie Chambers (Samantha Win), their guide and expert on all things zombie Lilly (Nora Arnezeder), jerk bag tagalongs Martin (Garret Dillahunt) and Burt (Theo Rossi), squad leader Scott Ward (Dave Bautista), his 2nd in command Maria (Ana de la Reguera), and his estranged daughter Kate (Ella Purnell). Wanna place a bet on which of these badasses isn’t making out of Vegas alive? The odds aren’t good but the payoff is totally worth the gamble.

There are a few questions that every zombie movie needs to answer, and it’s in those details that each film carves out its own unique space in the subgenre. The human-munching monsters of Army of The Dead, however, are an especially unique breed. A good many of the corpses littering the desert floor are your garden variety shambling zombie, but they are only one variety of the living dead this gory action flick has to offer. Hiding away in the skeleton of the towering Olympus Hotel & Casino lives a growing group of zombies that are intelligent, organized, and deadly powerful. They also have an undead horse and tiger which I was way too excited to see! And don’t you worry, that zombie tiger totally f*cks a dude’s shit up.

Leading this group of zombies is Zombie Patient Zero who escaped during military transport from Area 51 before laying Las Vegas to waste. Any human bit by this one specific zombie turns into another hyper-intelligent zombie and over time he has built a sizeable army. He rules over this new subspecies of flesh-eaters like an Alexander The Ghoul, ready to conquer the known world and bring about a fully zombified Earth. He wears a helmet, he rocks a cape, and when he declares war on the mercenaries pillaging the casino next door it’s an all-out, limb-tearing, gut-sploiding good time.

Color palette wise the movie is as grey af as any of Snyder’s more recent films and it’s loaded with lens flares, including some vegas-tastic hues splashing around the barrels of everyone’s assault rifles. Notably, Zack Snyder serves as Director of Photography on Army of The Dead, a first for the director who had previously shot his short film Snow Steam Iron (2017). I don’t know enough about cinematography or camera lenses to really critique some of his visual choices but the whole movie has iPhone portrait mode filter that you really have to make peace with early on.


To Snyder’s credit though, that precise control on focus allows him to play around with the depth of field in some really interesting ways (even if the approach stands out like a sore thumb when it doesn’t work). It’s a technique that no doubt helps cheat the look of a barren wasteland but it’s a very indie move for a film with a reported $70 Million budget. When the camera allows for wide shots though, the chaos of this desolate world really shines. Keep an eye out for a non-accidental “accidental renaissance” when the zombies mourn the loss of one of their own.

It should probably come as no surprise that Zack Snyder- a director who recently released a 4 hour cut of The Justice League– has taken full advantage of Netflix’s “no runtime too long” policy but from start to finish Army of The Dead is a gory good time. At 2.5 hours, it runs a little long for a shoot-em-up zombie heist movie but I can’t say enough good about the special effects in this movie. If you didn’t think there were enough intestines or smushed heads in Snyder’s previous zombie flick, rest assured that the practical effects budget was super-sized for Army of The Dead. He also makes up for lost time with a zombie elevator scare that kicks the entire 3rd act into high gear- not to mention a title sequence that is literally an entire zombie outbreak movie played on fast forward. Look, I’m not gonna sit here and tell you that this is the smartest movie you’ll ever see but it’s one hell of an action-horror hybrid featuring some of the most impressive gore Netflix has ever gifted us.

Army of The Dead is available right now on Netflix. What did you think of Zack Snyder’s return to the zombie arena? Would you like to see more from this universe of intelligent, militarized zombies? Share your thoughts with us over on Twitter, Reddit, Facebook, and in the official Nightmare on Film Street Discord. Not a social media fan? Get more horror delivered straight to your inbox by joining the Neighbourhood Watch Newsletter. 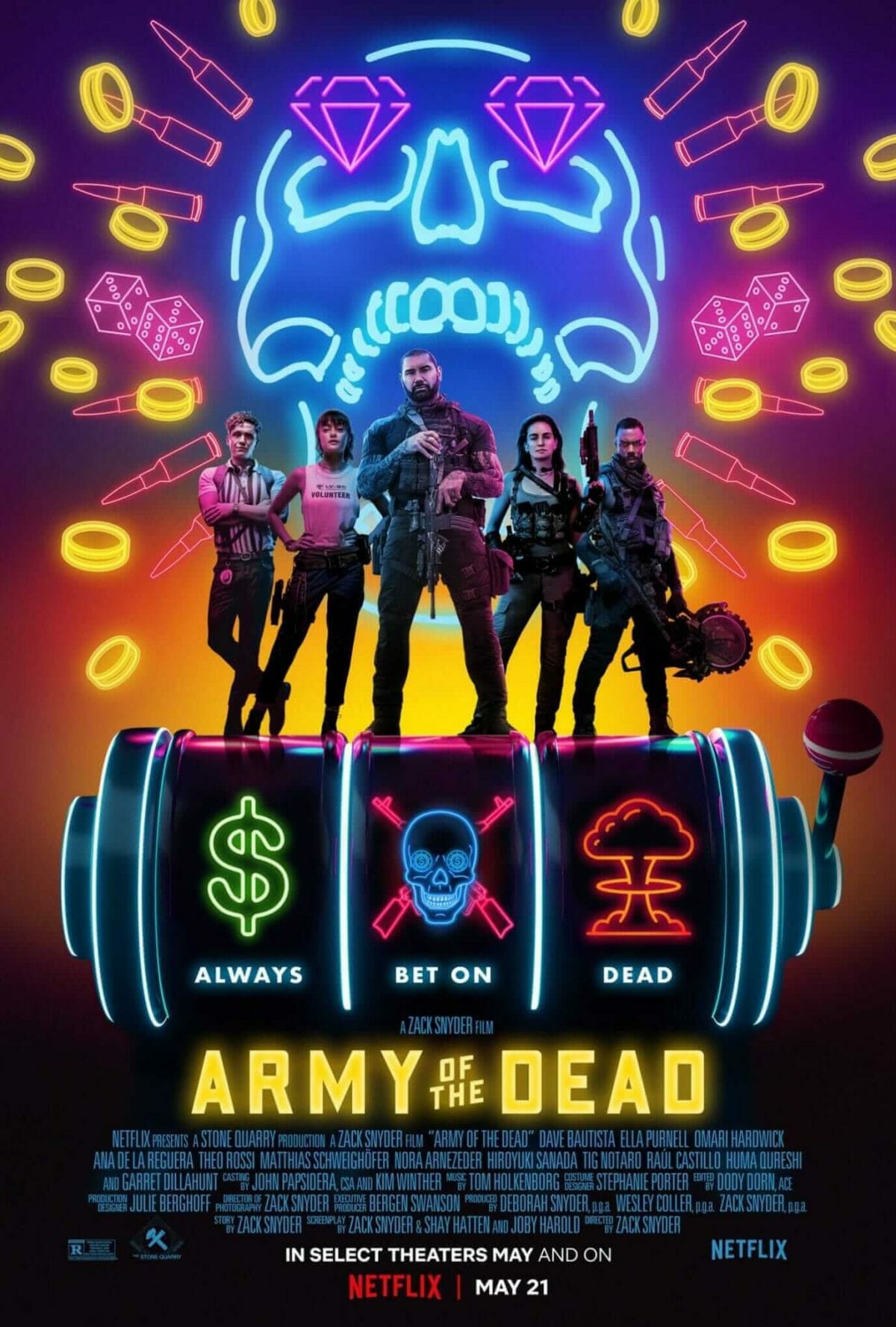 Review: ARMY OF THE DEAD (2021)
TLDR
It should probably come as no surprise that Zack Snyder- a director who recently released a 4 hour cut of The Justice League- has taken full advantage of Netflix's "no runtime to long" policy but from start to finish Army of The Dead is a gory good time. At 2.5 hours, it runs a little long for a shoot-em-up zombie heist movie but I can't say enough good about the special effects in this movie. If you didn't think there were enough intestines or smushed heads in Snyder's previous zombie flick, rest assured that the practical effects budget was super-sized for Army of The Dead.
Story
60
Zombies
90
Blood & Guts
100
Performances
80
82