You know what people never talk about when it comes to vampires? How quiet they are. Think about it. Beyond the occasional screaming supervillain at the end of a Blade or Underworld, vampires are pretty softspoken folk. It adds to their dangerous, gothic charm, right? Bela Lugosi’s accent would sound a lot worse hollered at you, after all. Anyway, I’m only just noticing this because at Tribeca this past week, I saw a vampire movie that made me realize how alike some vampire movies are to each other. How *quiet* they all are. Most vampire films, I’d be willing to bet, don’t rank very high in terms of decibels.

And then there’s Bliss.

Bliss is a coked-up, black-out, punk-rock, really really LOUD vampire movie. In fact, just calling Bliss a movie doesn’t exactly capture the feeling you get watching it in a theater. It’s a lot more like a concert, where the speakers are about to explode and the performers look possessed on stage. There are a lot things I liked about Bliss, and a handful of things I didn’t, but no matter my critiques, I will never forget watching it at Tribeca. I was left with a lot after I exited the theater and made it back to the real world. Including a pretty serious ringing in my ears.

Bliss follows the struggles of Dezzy, a painter who spends her nights in the wild and unpredictable underground art scene of Los Angeles. Dezzy is struggling to complete her latest painting, partially because it could be her masterpiece, and partially because her rent is three weeks past due. However, despite all the drugs, dancing, and sex she looks to for inspiration, she just can’t get the damn thing finished. That is, until her friend Hadrian offers her a new drug that’s been making its way around LA. It’s called, quite appropriately, “bliss.”

All of sudden, Dezzy‘s creative spirit is back. She starts slowly working out the details of her painting adding little by little to uncover the gem she knows is somewhere on the canvas. However, her creativity isn’t coming about in the way she’d like. Dezzy blacks out every time she paints, awakening to find that she’s done more of the painting without any memory. What’s worse, Dezzy gets quickly and tenaciously hooked on “bliss,” craving it every second that she’s awake. And just when you think things have gotten to their absolute darkest, Dezzy realizes it’s not just bliss she’s craving. It’s human blood. I really wasn’t kidding when I said this movie is loud. From the second the acid-trip technicolor title cards explode on screen until the pulse-pounding credits, it feels like there are only a few moments of relief from eardrum-shattering LSD simulations. If that doesn’t sound like your type of entertainment, then you probably won’t like Bliss, no matter what you think of the other elements of the film. But if you think you can make it past that and still have a good time, there are a ton of things I think you’ll like about this movie.

“From the second the acid-trip technicolor title cards explode on screen until the pulse-pounding credits, it feels like there are only a few moments of relief from eardrum-shattering LSD simulations.”

That starts with the concept itself. Bliss isn’t your typical vampire film, and not just because of director Joe Begos’s wildly different directing style. Instead of focusing on the vampire as an antagonist, this movie tells the story of a victim turning into a vampire. It might not be the first time that someone’s taken that angle with a vampire story, but it probably is one of the most immersive examples of that angle. We go every step of the way with Dezzy as she descends into darkness, experiencing the maddening effects of diablo right along with her. Now, I love a good monster movie, where the threat is external. But the idea of an internal horror, where the protagonist has to deal with an evil within, is an effective and underutilized type of terror. I was happy to see one done so well, and so differently, in this movie.

But just because this is an internal horror movie doesn’t mean it doesn’t have some pretty incredible external effects. Specifically, the gore in this film is just astounding. I’m not typically very bothered by gore in movies, but there were several times in Bliss that I actually had to look away. And because I knew just how far this movie would push its gore effects, it made every possible kill that much more suspenseful. I don’t get nervous in a PG-13 movie when a killer holds a knife to a victim’s eye, because I know it’ll cut away before we see anything too terrible. None of that comfort is present in Bliss. 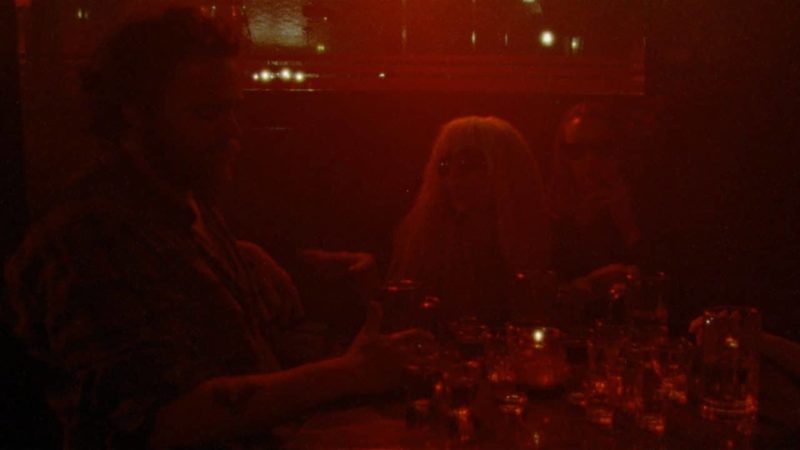 Carrying all the madness of the film’s story, imagery, and effects are a couple of really great performances as well. Of course, Dora Madison manages a lot of that as the artist-turned-monster Dezzy. Around her are Jeremy Gardner, who plays her friend Clive and appears in another Tribeca Film selection this year, and her dealer Hadrian, played by Graham Skipper. In different ways, these two add tragedy to Dezzy‘s experience, both as concerned friends and eventually possible victims. After all, vampires aren’t usually picky about whose blood they drink, especially not in a film as brutal as this one.

Now, on to my very few critiques. I could nitpick about the individual moments I didn’t like, but I think they could all be covered under one general criticism. That is, the choices the characters make don’t always make sense. For example, characters go from being mad at each other to being friends again in a moment’s notice, without a clear reason as to how they made up. These moments don’t distract from the overall film experience that badly, but they might stick out to someone making a decent effort to follow the movie’s story.

Fortunately, it’s easy to overlook a plot point or two when the ears are being blasted off of your skull.

Before I conclude this, I have a tiny admission to make. A couple of times during this film, I did wish it would just turn everything down a bit. The noise, the gore, the lights (there’s a seizure warning at the beginning, horror fans), everything. There were moments I thought this was going to be a bad review, so much did it affect me. But after I left the theater, I couldn’t deny that I had liked this film. It manipulated my senses to make me uncomfortable, for sure. But it turns out, when you’re making a beastly, graphic, drug-addled vampire movie, that’s not exactly a bad thing.

For more coverage of the genre films at this year’s Tribeca Film Festival, keep an eye on NOFS for the next couple days. I already hinted at Jeremy Gardner’s Something Else, but you should also really check out Come to Daddy, which was one of the most stand-out films at the festival, especially for horror fans. Plus, you can find other fantastic reviews on our Facebook, Instagram and Twitter pages. And as always, for all the best reviews, the best interviews and the most relevant horror news, keep lurking at Nightmare on Film Street.