I remember interning at Fantasia three years ago and attending the Frontieres Market, a place for filmmakers to pitch ideas and rake in funding for their next project. While walking around the crowded room aimlessly, I was handed a postcard, advertising a movie called Slaxx, with the subtitle “An ass to die for.” I thought the concept of a killer pair of jeans was hilarious, so I held onto the postcard, putting it up on the wall of my rehearsal space for all to see. I had initially thought it would only be a short film, but director Elza Kephart (Graveyard Alive) managed to stretch that idea into a feature film, and bring it to Fantasia three years later.

Libby (Romane Denis, Slut in a Good Way) is the fresh-faced new salesclerk at “Canadian Cotton Clothiers”, a clothing brand that prides itself on its sweatshop-free GMO-free products. It’s the big night before the unveiling of the Super Shapers jeans, designed to adapt to any body type and shape the wearer’s butt to ideal desirability. All the store employees want to get their hands on their own pair, but aren’t necessarily willing to pay the $150 price tag. But these jeans do more than make your butt look good. They have a mind of their own, and they want blood. One by one, each employee disappears off the floor, and are later discovered in the back rooms, dead and decapitated.

“…I was really expecting a goofy blood feast, but it turned out to be a darkly deadpanned satire.”

When the store manager Craig (Brett Donahue, Radius) is alerted, he chooses to sweep the problem under the rag. There’s nothing he can do anyway, there’s no cell service and no Wi-Fi, and the store is electronically locked down in preparation for launch day. With no choice but to wait until morning, it’s up to Libby and her coworker Shruti (Sehar Bhojani, The Handmaid’s Tale) to survive the night and uncover the sinister origins of the bloodthirsty jeans.

Behind this unusual slasher is a deeper commentary on fast fashion. It’s later revealed that the lines CCC has been feeding the public are all lies. The company is only interested in manufacturing their apparel for as cheap as possible to sell it for as much as possible. To maximize their profits, they sourced their material from genetically modified cotton crops, picked by underpaid foreign child laborers. To quote Elza Kephart on the thesis of her film: “Under capitalism, there’s no such thing as ethical consumption.” It’s a very real problem that all of us are guilty of perpetuating, and yet, the film doesn’t beat you over the head with its message. 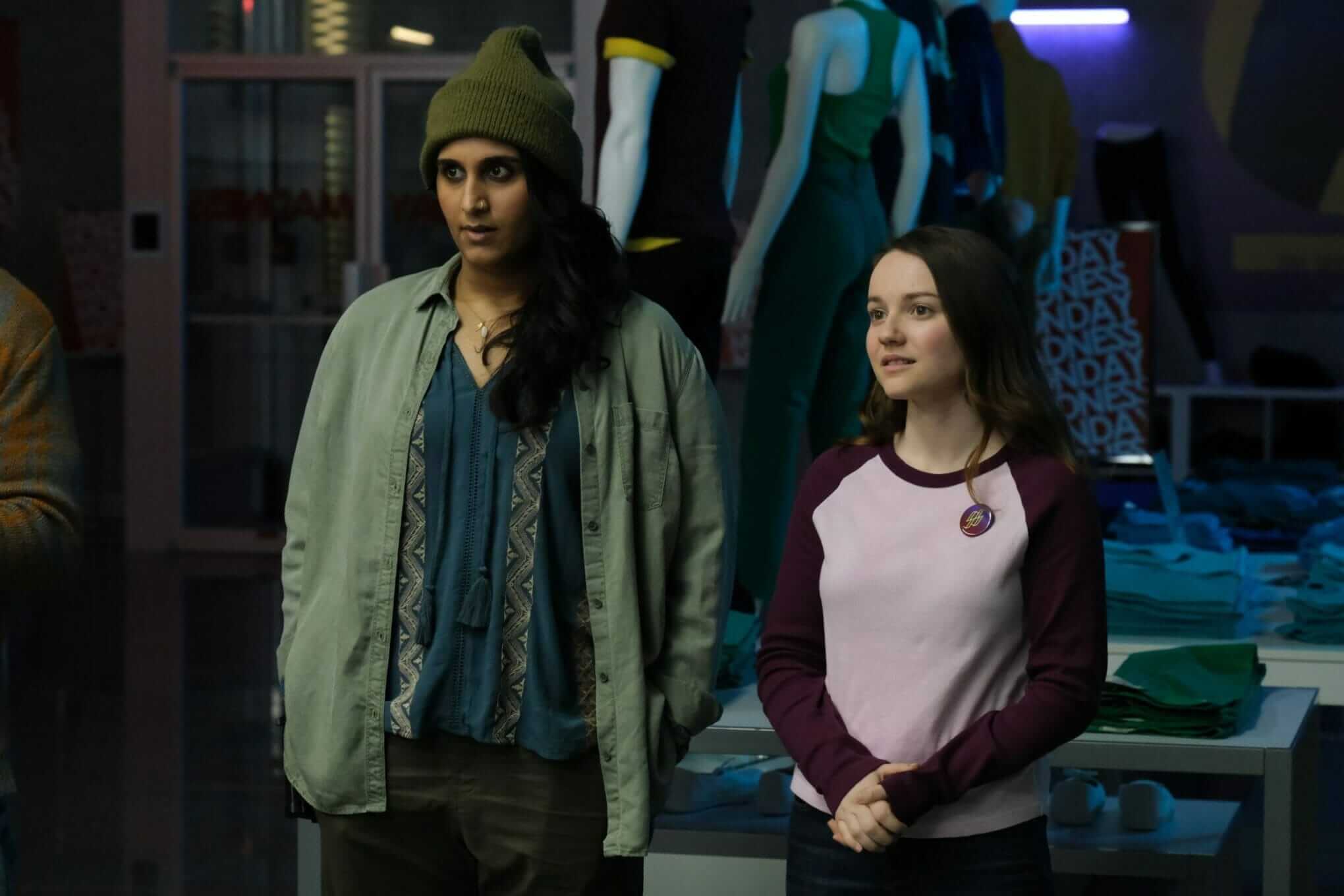 The lighting in front of the store is bright, with positive slogans printed on every wall. Contrast that to the cold and dark corporate offices and warehouse in the back of the store. It’s a visual representation of the nefarious nature of corporations that sell you a promising future, yet have no intention of fulfilling that future through concrete actions, since those actions aren’t deemed profitable.

The store employees communicate using earpieces, which makes for some good comedic moments at the beginning, when they’re standing right next to each other. Libby joins the workforce with so much hope, thinking that she’s contributing to “a better tomorrow today.” But the rest of the sales team have turned bitter and apathetic from years on the floor, especially Shruti, who’s in full IDGAF-mode. Then there’s Craig, who aspires to climb his way up from store manager to working alongside the charismatic CEO Harold Landsgrove (Stephen Bogaert, American Psycho), and he won’t let a few dead employees get in his way. Ahead of launch day, CCC rolls out the red carpet for fashion influencer Peyton Jules (Erica Anderson, FX’s What We Do In The Shadows). We see two sides of Peyton; her bubbly on-camera persona, and her true demanding diva self off camera. You’re almost happy to see her strangled by the sentient denim. 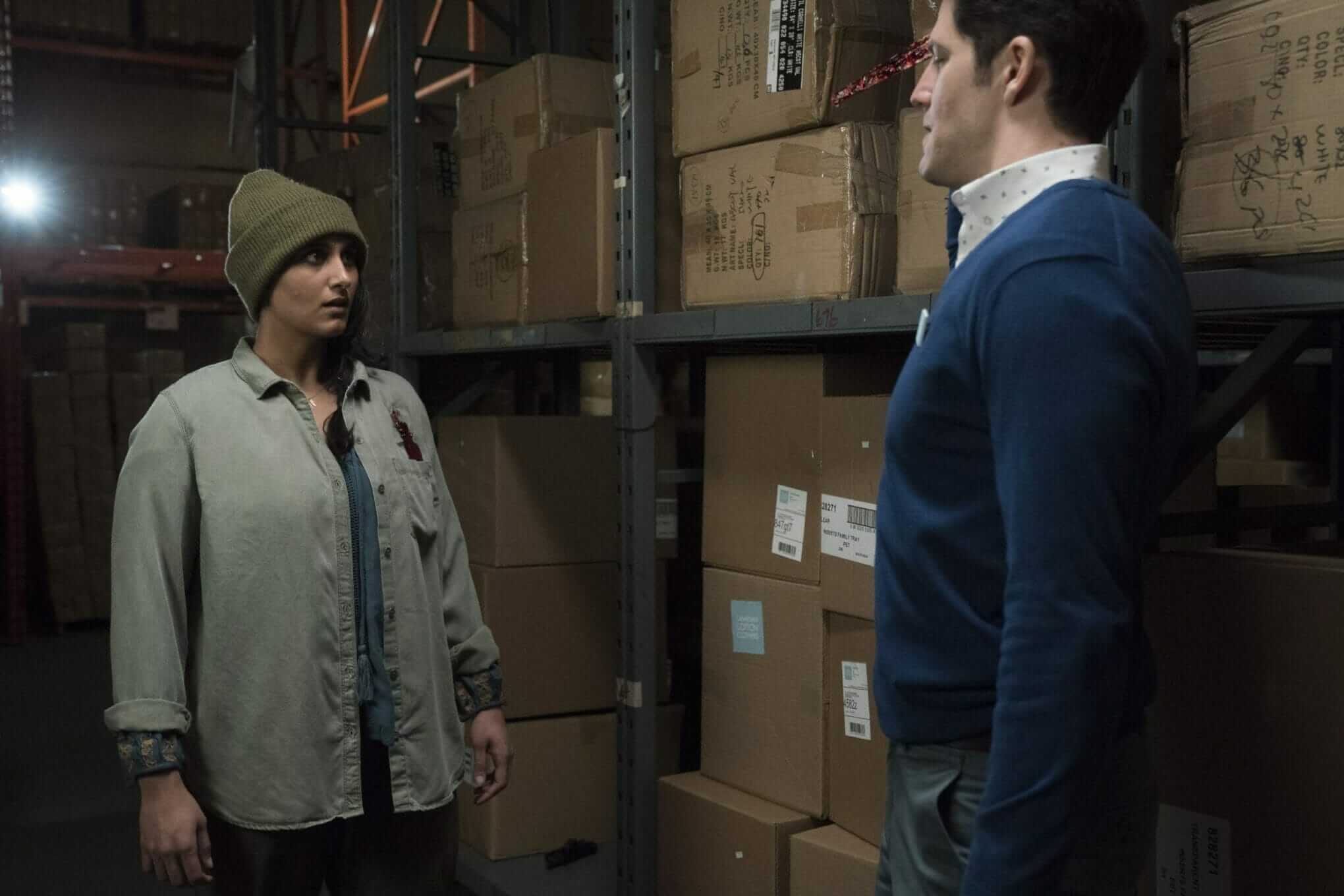 The jeans come alive thanks to a combination of puppetry and CGI. The credits feature behind-the-scenes clips of a puppeteer in a green suit, manipulating the pants as it dances. In the movie, the moving jeans look realistic enough. Had they been completely rendered using computer graphics, it would have taken me out of the movie. With such a unique killer comes some very creative kills, as the jeans crush its victims’ waists, wrap around their necks or chomp off their hands. The effects were achieved by Blood Brothers FX team Jean-Mathieu Bérubé and Carlo Harrietha, whose resume includes Turbo Kid, Blood Quantum, We Summon the Darkness and Game of Death.

Going into this movie, I was really expecting a goofy blood feast, but it turned out to be a darkly deadpanned satire. It made me question my own buying habits, and whether my big pile of black band shirts might contain traces of foreign workers’ sweat and blood. As Western consumers, we’re often blind as to how our material goods are made. And that’s the true horror in all of this. So as much as we relish the death onscreen, can we bear the thought of inadvertently causing death in sweatshops?

“[Slaxx] made me question my own buying habits, and whether my big pile of black band shirts might contain traces of foreign workers’ sweat and blood.”

Elza Kephart’s Slaxx celebrated its World Premiere at the 2020 Fantasia Film Festival. Click HERE to follow all of our festival coverage, and be sure to let us know whether you feel any guilt for your fashion choices on Twitter, in the official Nightmare on Film Street Subreddit, and on Facebook in the Horror Movie Fiend Club! 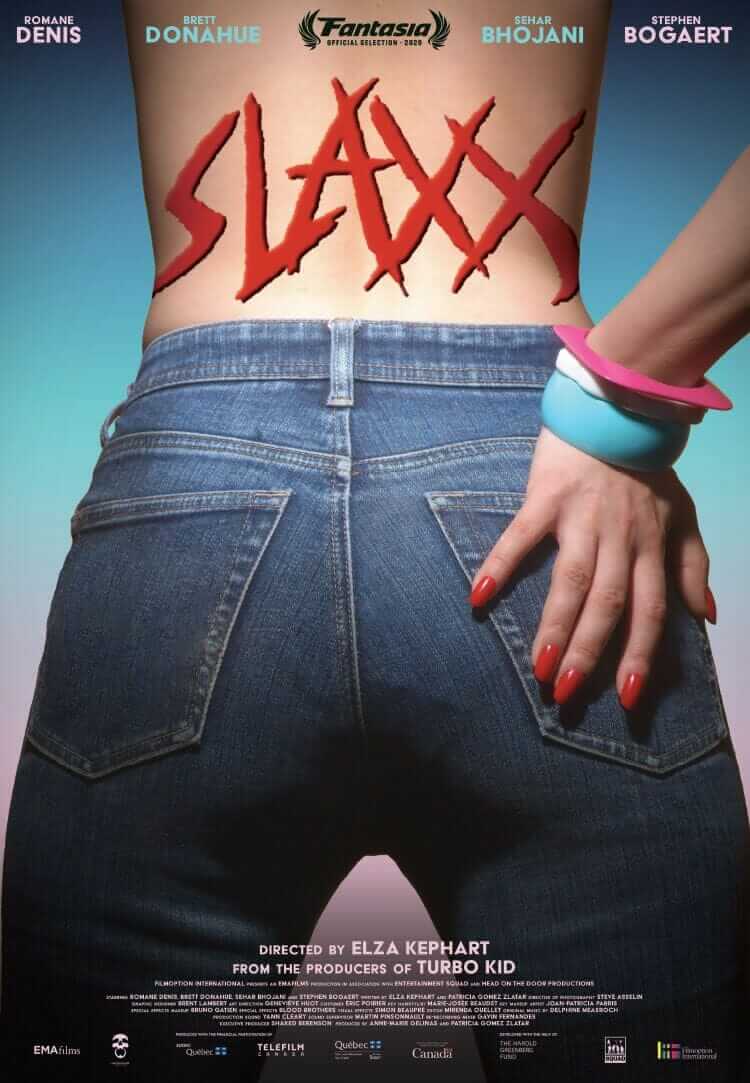 TLDR Going into SLAXX, I was really expecting a goofy blood feast, but it turned out to be a darkly deadpanned satire. It made me question my own buying habits, and whether my big pile of black band shirts might contain traces of foreign workers’ sweat and blood. As Western consumers, we’re often blind as to how our material goods are made. And that’s the true horror in all of this. So as much as we relish the death onscreen, can we bear the thought of inadvertently causing death in sweatshops?