I’m going to preface this review by saying I was not alive in the 70’s, and did not get the opportunity of seeing The Exorcist in its original theatrical run.  But, as a life-long horror fan, I’d yet to experience a screening that was so haunting, so deeply unsettling, I found myself looking around the stiffly silent audience to ensure I wasn’t the only one barely keeping it together. I am not dramatizing. Hereditary delivers.

We’ve all been boarding (or refusing to board) the hype-train for Hereditary since it premiered to huge claims at this past Sundance – the film has quickly earned the title of ‘the scariest movie of the past several years‘. Those wary of the overwhelmingly positive feedback have oft been citing A24’s It Comes at Night, which, despite a highly effective marketing campaign, divided audiences last year over its subtle storytelling.

Hereditary will not fall victim to that fate. The trailer is terrifying. The film is terrifying. Neither detracts from the other. If you’re worried this dollhouse didn’t save any rooms left to explore, you’re in for a pleasant experience when the film hits theatres on June 8th. (That’s if you associate heavy breathing, gasping and clammy hands pleasant, of course..)

“..I found myself looking around the stiffly silent audience to ensure I wasn’t the only one barely keeping it together.”

Hereditary follows the Graham family, who live in a large and isolated farmhouse in the thick of the woods. Like the dollhouses and miniatures that matriarch Annie (Toni Collette) creates, this house holds many rooms, framed by dark wooden thresholds and locked doors. From frame one, the horror-trained eye will be patrolling shadowy corners and peaking down hallways, almost creating a preemptive paranoia that ultimately only disarms you when the film really kicks off.

Annie is dealing with the weight and grief of the recent passing of her mother, who had previously been living with the family as both her physical and mental health declined. We open on a funeral, with an impatient Annie waiting on husband Steve (Gabriel Byrne) to round up the children; Peter (Alex Wolff), the slightly depressive but charming teenage son, and Charlie (Milly Shapiro), their pre-teenage daughter who resides almost entirely in her own head, experiencing the world through a lens the audience tries desperately to grasp. Particularly as we watch her snip the head off a dead bird while non-nonchalantly munching on a chocolate bar. 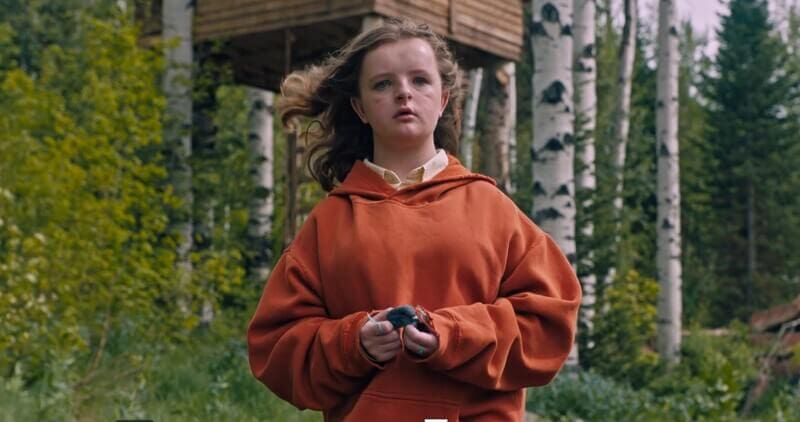 There is a disconnect among the Graham family, and we learn very early on that it stems way deeper than the recent addition of grief. Annie begins to experience visual manifestations of her recently-passed mother, and whether it’s because she works from home in her studio alone, or something paranormal is truly afoot, it only divides Annie further from her family. But Annie isn’t alone in these experiences – little Charlie seems to be connecting or channeling something with fervorous etchings and drawings in her notebook.

As grief continues to swell, Annie reluctantly seeks solace in a community support group. It is there we learn where the roots of this family tree truly began to rot. Severe struggles with mental health. Dissociative identity disorder, dementia, and depression have plagued Annie’s family, and has affected every member of it – except Annie. But as this movie is titled Hereditary, the audience soon regards Annie as a ticking time bomb. And so does the rest of her family.

“Hereditary is an assault on your emotional response..”

Hereditary is an assault on your emotional response. And that’s where the film really shines –  its ability to create emotional turbulence in its audience, and how strange it is to associate those feelings alongside the traditional horror-given emotion; fear.  Together, the audience rides waves of overwhelming empathy, abhorrence, suspicion, sympathy – while still grasping tightly to their armrests. First-time filmmaker Ari Aster has tapped into a primal, emotional connection – turning a 2-dimensional format of storytelling into something that invades the theatre, gripping hold of each and every member of the audience.

Hereditary takes complete hostage of your emotions, and won’t let go until the credits roll.

We caught Hereditary at the 2018 Overlook Film Festival in New Orleans, Louisiana. Stick around Nightmare on Film Street for even more festival coverage, and check out our Twitter and Instagram pages for highlights from the event.