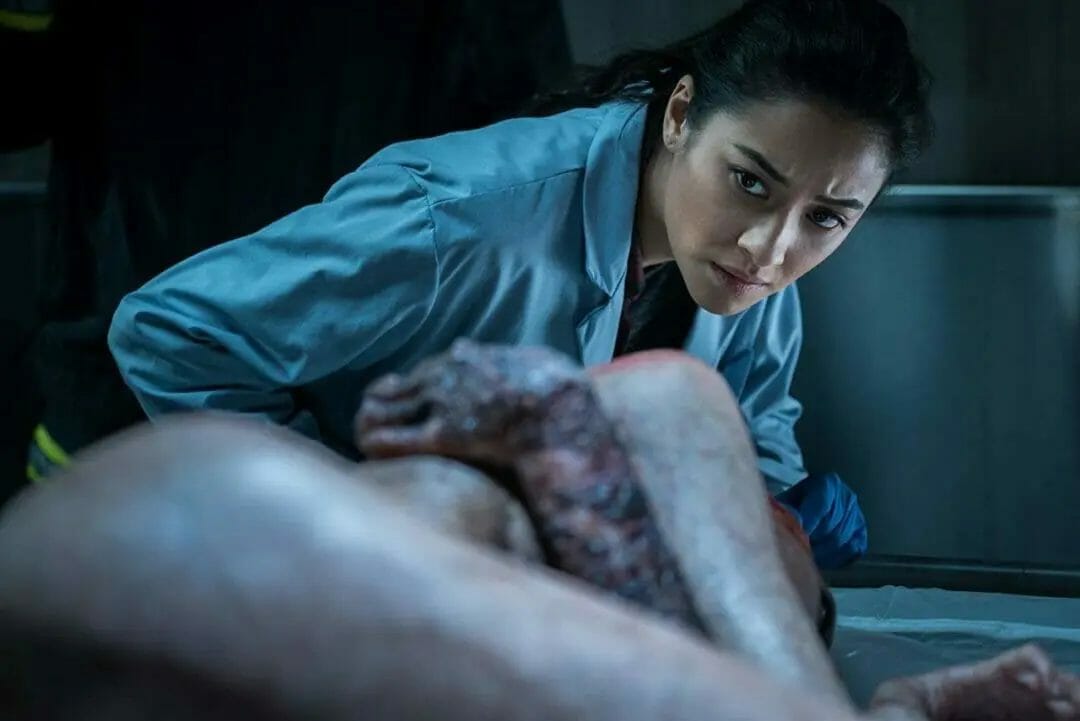 High hopes, low expectations. That’s how I try to go into a horror movie I’m apprehensive on. It’s how I walked into The Possession of Hannah Grace, which caught me, and I’m pretty sure the rest of the horror community, by surprise. I’m sure I shamefully said “Oh, they’re going to theatres with this?” out loud at one point. (Bad, Kim, bad. Every movie should go to the theatre if it dreams it.) And I run a site that published trailers for the darn thing.

Directed by Diederik Van Rooijen and written by Brian Sieve (several episodes of the Scream Series), the trailer itself depicts a spooky romp in the morgue of a hospital. There’s a cadaver that just ain’t cadaving and might be harboring a hellbent demon. Okay – sounds cool. But alas, the resulting film plays out more like a less-than-cohesive The Exorcism of Emily Rose (2005), or a shock-and-awe spiritual sequel to The Autopsy of Jane Doe (2016).

“There’s a cadaver that just ain’t cadaving and might be harboring a hellbent demon.”

Our cold open kicks off by inviting us to the tail-end of the exorcism, of which we already know ends up with poor Hannah Grace (Kirby Johnson) on a cold metal slab. Rather than efficiently and swiftly kicking that demon into the afterlife, we skip the perfect opportunity where she plays dead briefly for a little toothy grin action (seriously, why do they always give demonically possessed girls bad teeth? Nails I get. Dirty, cracked, fine. Give a girl braces next time. That would be a unique touch) and to practice some levitating calisthenics on a few priests. It seems the possessed Hannah has some supernatural abilities; she smizes at whatever she wants to float and tree-branch sound, and then they float and tree-branch sound. I’m not insulting this demon or anything, but that seems more like something a witch would do.. 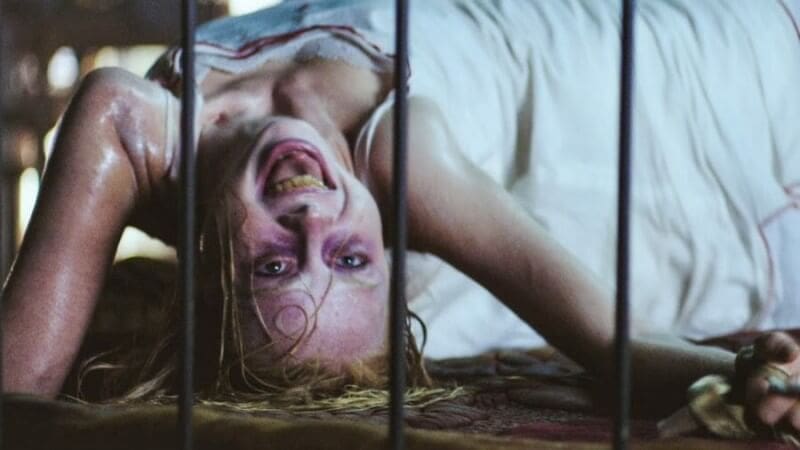 Cold open ends with Dad (Louis Herthum) hastily mercy-murdering his daughter and kicking off the events that occur three months later. But instead of dropping us straight into the morgue, where this whole shebang should have kicked off, we opt to meet the protagonist who’s living a tumultuous life instagramically close to the Boston Bridge. Megan Reed (Shay Mitchell), has her own demons. (I rolled my eyes typing that.) Rather than giving her one hearty backstory, she got a whole slew of them. Take your pick. There’s: ex-cop whose partner died after her inability to shoot a potentially un-armed man facing away from her, the PTSD-borderline-psychosis she’s in from the aftermath, and the drug addiction she’s freshly in recovery for that also ended her romantic relationship with the only other cop in this movie. We won’t fully flesh any of them out though, you’ll just get shaky hands and some ‘go see a psychiatrist for a diagnosis’ worthy hallucinations.

With the recommendation of her AA Sponsor, a nurse at the hospital – Megan interviews for a nightshift intake position at the morgue. It’ll be good for her. The basement. Alone. With her psychosis. (I’m sorry that I’ve gone and diagnosed her myself, but someone needs to.) We go through her interview for some reason, which quickly turns into the briefest training rundown ever – and we immediately get a sour taste in our mouths. Megan rolls her eyes, and is completely bored. I wouldn’t have hired her. When she tells her superior she “won’t let him down” and is “grateful for the position” – it’s the biggest jumpscare of the whole film. 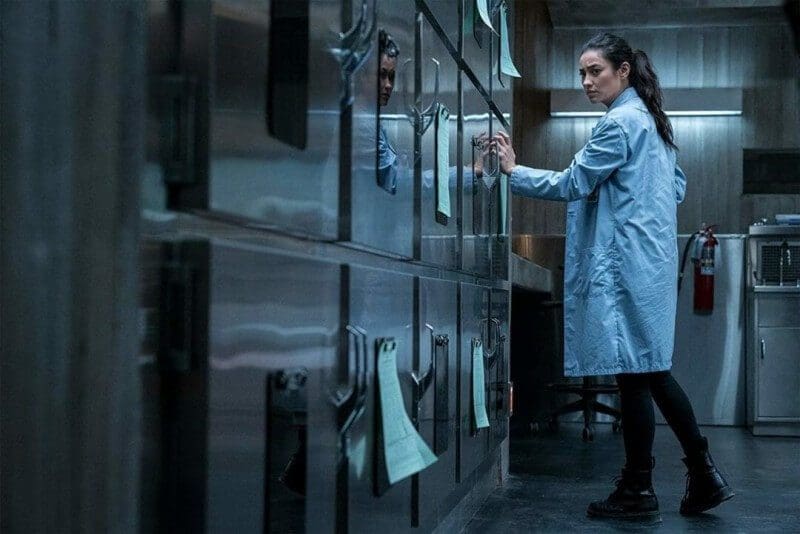 Despite her lackluster enthusiasm, seems like the nightshift is hard to fill. She’s on duty (ALONE) the following night. No training, no shadowing an expert, no supervisor. And before our haunted cadaver even arrives, she’s already on edge. Apprehensive at the motion sensor lights (that’s horror movie fodder right there, that is), nervously peaking down corridors, and hallucinating that guy she thinks she should have shot to save her partner’s life. Yep. This sure is good for her.

The Possession of Hannah Grace really gets down to business when our cadaver is delivered, night two. The photographing imagery won’t work, fingerprinting is impossible, so Megan throws Hannah on ice; into the morgue fridge. But she doesn’t want to be in there. She might not be dead. 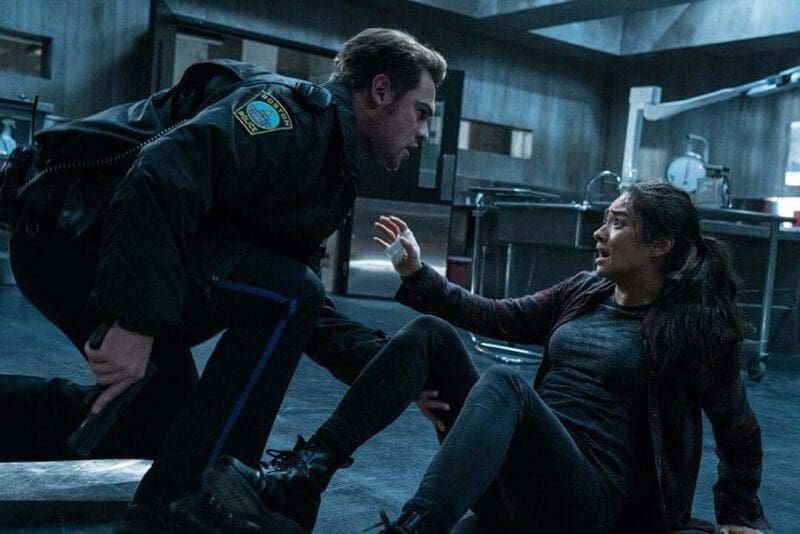 Hoo boy, where to start. Let’s talk about the comparisons between The Autopsy of Jane Doe. Possession of Hannah Grace was in development for some time, originally titled Cadaver. Likely as was Autopsy. Projects can be developed simultaneously. Life is like that. The big, creative bucket in the sky can fill different brains with similar ideas at the same time and it not be plagiarism. It happens. But The Autopsy of Jane Doe definitely influenced this film in a big way. Autopsy made Possession turn right when they should have turned left. Even it left would have taken them right to Autopsy’s doorstep.

“Autopsy made Possession turn right when they should have turned left. Even it left would have taken them right to Autopsy’s doorstep.”

The Possession of Hannah Grace is heavy-handed in its entirety. The over-use of Hannah. The character Megan. The body count. Everything that worked so beautifully in The Autopsy of Jane Doe is not present here. They are similar in concept and title alone. And it made for a lackluster movie. We would have liked Possession more if it emulated Autopsy.

There are too many horror elements with potential at The Possession of Hannah Grace’s disposal that get smothered by Hollywood Horror Juice (TM). The morgue itself is cold and barren. High cement walls. Dim lighting that frequently casts entire hallways and rooms in darkness. Megan, our protagonist, is alone and untrustworthy. What she sees isn’t always truth. Hannah, with a cold, unblinking stare. Her body rigid, contorted. I don’t want to see her move. I want to see her moved. I want to see her popping up in impossible places. I want to waveringly trust rigamortis even though she’s found 20-feet away from her slab.

And again unlike Autopsy, The Possession of Hannah Grace has a complete unawareness of its audience. Did no one ever check in to think “Okay in this scene, what can audiences gather themselves? By actions? By body language? What do they know at this point?” You can then immediately cut any and ALL dialogue that spells this out. If we can pick up on it ourselves, you telling it to us (multiple times even) is insulting. Audiences like to think when they watch movies. We like to deduce. We also like to talk about movies after they finish. So give us something to solve, to ponder. Hannah Grace’s blue eye when it should be brown isn’t a brain-bender by any means, but having a character go as far to say “The demon did it” is landing on deaf ears. We’ve become Megan, rolling our eyes at this movie for treating us like we don’t know “Green means Go“.

The Possession of Hannah Grace is now in theatres. Let us know what you thought over on Twitter or in our Fiend Club Facebook Group!

Review: THE POSSESSION OF HANNAH GRACE (2018)
TLDR
The Possession of Hannah Grace is heavy-handed in its entirety. Our use of Hannah. Our character Megan. The body count. Everything that worked so beautifully in The Autopsy of Jane Doe is not present here. They are similar in concept and title alone. And it made for a lackluster movie. We would have liked Possession more if it emulated Autopsy.
Characters
30
Concept
50
Special Effects
60
Script
10
37