Directed by Marcus Dunstan, Unhuman is the unhinged after-school special every young horror nerd (myself included) would have loved to race home to watch. Packed full of horror’s next-gen stars, this romp mashes Degrassi teen drama with a neon tinted zombie fever dream. It’s also co-written by Dunstan (Saw IV-VI) and Patrick Melton (Scary Stories to Tell in the Dark), and produced by Blumhouse, so you know you’re in for a treat.

For wallflower Ever, played by Brianne Tju (I Know What You Did Last Summer), the normal tension of high school friendships is hard enough to navigate without bringing the zombie apocalypse into it. When she and her fellow angsty classmates, played by Benjamin Wadsworth (Teen Wolf: The Movie), Uriah Shelton (Freaky), Ali Gallo (The Sex Lives of College Girls), and Drew Scheid (Halloween 2018) depart for a field trip, things suddenly turn deadly after the bus crashes into a pedestrian and sends the group careening into the woods.

While the students assess their injuries, an emergency broadcast plays over the radio announcing a chemical attack. It becomes clear immediately that the survival of the group depends solely on their ability to work together. The poor babies are doomed. As the stakes get higher and the natural hierarchy of high school gets in the way of their survival instincts, the gang has to evolve beyond their labels to evade danger. But is there more than their cliquey reflexiveness working against them?

Between Ever‘s “cool mom” and the PE teacher chaperone, who is a stack of half-baked one-liners in a trenchcoat, it’s obvious the intended audience is somewhere between Chuck E. Cheese and HotTopic. Despite this, the attempted spin on classic teen tropes is always admirable. While there are plenty of slashers dedicated to teen audiences, there are few zombie flicks that dare to solely center on this age group. For that, the writers deserve to be cut some slack. 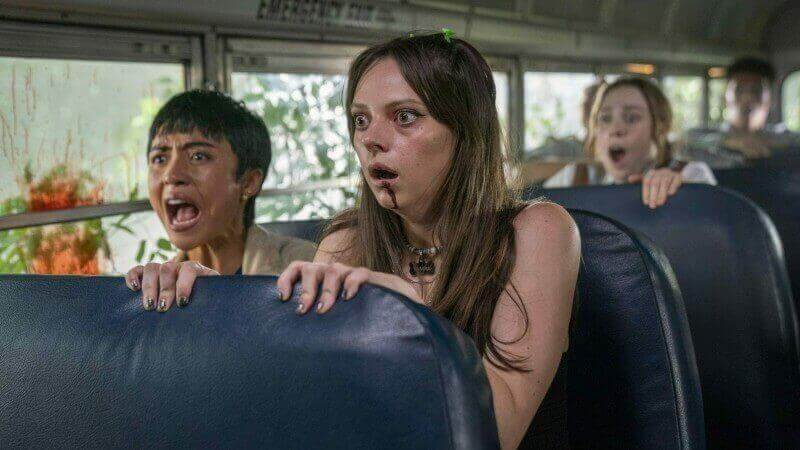 While the dialogue for the adults is a little over-the-top, the kids are more than alright. Brianne Tju makes an excellent final girl, and hopefully will be starring in more genre projects. Uriah Shelton gives a dynamic performance, swinging from knuckle-dragging bully to compelling scream king through the arc of the film. Newcomer Ali Gallo holds her own as a believable teenager, leveling the playing field for the more recognizable cast members. That said, the film would have benefitted from letting the camp of the dialogue bleed into the performances by the teens. This cast could have really shined with a longer leash.

On one hand, there is a solid plot-based reason why the students are archetyped so heavily. On the other, because the teen cast plays into the drama as opposed to the camp of a zombie comedy, it comes across as having a case of the kids-written-by-adults syndrome, and some of the characters feel like a caricature. The best example of this is when resident jock/bully Danny (Uriah Shelton), is so dedicated to shutting down the zombie theories offered by his classmates that he refuses to believe there is anything unusual about the situation. He heard the same emergency broadcast that his classmates did, but it must be bogus if the fringe kids are believing it. This gets progressively funnier as the situation escalates, but we never know if we’re laughing with them.

“….grab your favorite tween to watch [Unhuman] with you. You’ll have a good time, but they’ll have a great one.”

Finally, let’s talk about the zombies. Without giving too much away, it’s safe to say the zombies are unusual. The source of the symptoms is a glowing green drug mix created by an ex-con drug dealer that when injected turns its victim into a purple-veined rage beast à la Batman‘s Bane. At one point we are gifted with the introduction of a Freddy Kruger glove where the knives have been replaced with syringes. The zombies are fast, loud, and a great addition to the genre for the younger audience that will connect with the film. If you’re on the fence about seeing it, grab your favorite tween to watch with you. You’ll have a good time, but they’ll have a great one.

Unhuman, from Blumhouse Television and EPIX, is available on Digital on June 3, 2022. Let us know what you thought of this high school horror flick and tell us how you would prepare for a zombie outbreak over on Twitter, Reddit, Facebook, and in the official Nightmare on Film Street Discord. Not a social media fan? Get more horror delivered straight to your inbox by joining the Neighbourhood Watch Newsletter.

TLDR Packed full of horror's next-gen stars, this romp mashes Degrassi teen drama with a neon tinted zombie fever dream. While the dialogue for the adults is a little over-the-top, the kids are more than alright. Brianne Tju makes an excellent final girl, and hopefully will be starring in more genre projects. This cast could have really shined with a longer leash but the zombies are fast, loud, and a great addition to the genre for the younger audience that will connect with the film. 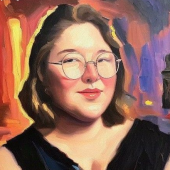 Sara is a traveling contractor, genre nerd, and stress-eater from CA. Find her on the festival circuit. She'll be the one in the tie-dye.