What does Thanksgiving really mean? Is it all about obnoxious feasting? Family turmoil? Idle device fixation? Superficial displays? Whitewashed genocide? Blumhouse and Hulu’s year-long holiday horror anthology, Into The Dark, continues to drive home the notion that families are still important in America, but questions the quality and meaning of togetherness.

Director Marcus Dunstan (The Collector) and writers Noah Feinberg and Patrick Melton (Feast) partake in turning a seemingly peaceful holiday into a menacing night of torment with the second Thanksgiving episode of Into The Dark’s second season, simply titled, Pilgrim. With the creative writing of Noah Feinberg, Pilgrim shares a fun way of getting back to the basics by graciously eliminating the distractions of our contemporary new world.

The modern suburban family gets more than they bargained for when a pair of Thanksgiving pilgrim reenactors take their roles far too seriously. The dinner tables are turned when the “ungrateful” family members are taught a lesson by the colonial folk and find out that Thanksgiving is all about gratitude. So, I ask you again, what does Thanksgiving really mean? Pilgrim seems to be aware of the holiday’s high points of appreciation… (Hint: It’s not about the turkey) Sandwiched between some fantastic opening and closing credits, Pilgrim is a visual experience just as much as it is a holiday one. Dunstan utilizes a variety of angles and techniques to place the viewers in the hectic experience of the characters. Fluid zooms, gliding shots, and handheld tracks provide a lot of movement throughout the film. This movement not only contributes to the increasing intensity of the narrative but also creates a unique combination of stable and hypnotic states between the scenes that speaks to the Barker Family’s incredibly odd situation.

Almost all of Pilgrim takes place in a singular setting, the Barker Family residence, which could potentially stifle this strange gathering, but the variation in transitions and shots Surprisingly alternative use of mirrored scenes add a modern space to the visuals of Pilgrim. The display of each scene turns disjointed as the film approaches its pretty brutal climax. This gradual change is brilliant and keeps viewers engaged throughout the ordeal presented by the unwanted pilgrims. The whirling cinematography truly speaks to the multiple levels of fright crafted in traditional and contemporary care. The look and perspective of this episode adds an engaging and creative signature to the Into The Dark anthology.

In addition to Pilgrim’s impeccable knack for authenticity, it provides one of horror’s greatest staple items in plenty. The gore factor of November’s episode is one that hits unexpectedly and stands as an intriguing part to round out the shocking ending. In the midst of unwanted guests, mother! style, Pilgrim serves up some serious WTF moments as the Barker Family comes to terms with the pilgrims’ sinister intentions. Pilgrim’s fearless venture into some truly disturbing actions and events is fortunate means of giving back to the genre it lovingly serves. What starts out as an innocent reenactment made to encourage tradition, values, and gratitude, quickly turns into a terrifying dinner party covered in blood, carnage, and a few other surprising body parts.

Between the torture of some colonial stocks, a good branding, and some bloody butter, Pilgrim proves that it’s simple storyline is not afraid of some brutality. The situation at the Barker Family finds themselves in gets ugly real fast. Each scene meant to turn for the worst turns hard pretty fast. While you can feel the dread building up, the events unfold flawlessly to reveal some merciless horror that parallels the brutal history we’ve buried for so long. Just when you think you’ve got some key pieces to the end figured out, Pilgrim has the guts to really push the barrier of Into The Dark’s territory. This episode is a real testament to just how far into the dark the series is willing to go. 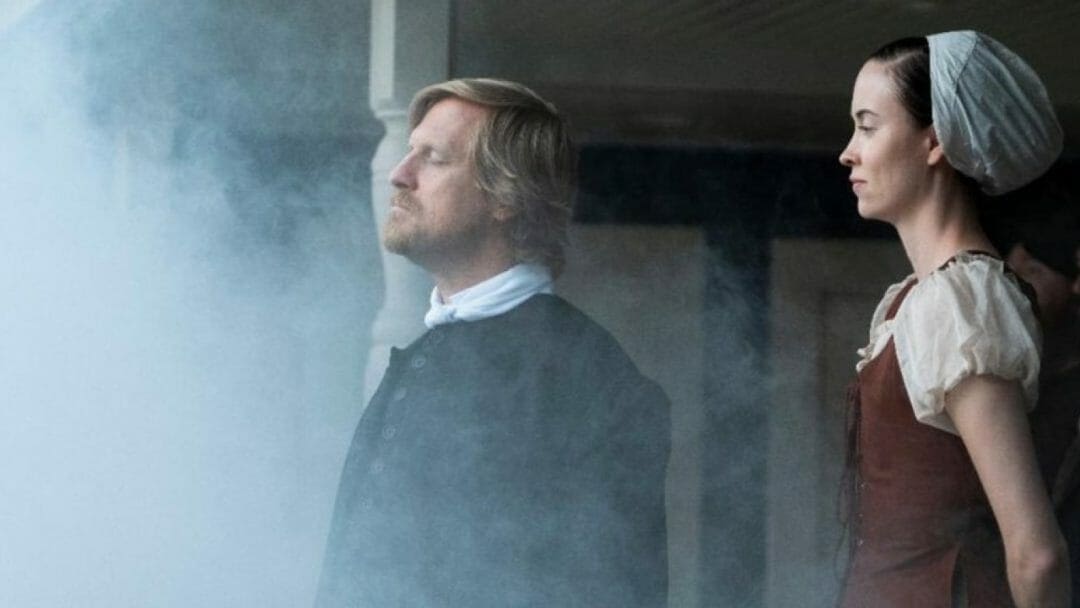 Pilgrim may be based on a true story, but it finds a foundation in severe self-awareness and relevant meaning. Levity may have been with kept the colonial travelers sane during their journey on the Mayflower, but it also plays a keynote in dressing up Dunstan’s film. The frivolous modern details added to the tradition of our annual Thanksgiving celebration are portrayed as just as much of a threat as the murderous pilgrims. Pilgrim pieces together our general petty judgment, skepticism, disrespect, ignorance, and sardonic attitude to motivate some old-school villains into teaching contemporary audiences what the season is really about. Pilgrim knows the meaning, it is aware of what we should get out of Thanksgiving, but it really forces viewers to see what they truly have, appreciate it all, and refuse to ask for more.

In addition to some of those fantastic visuals, the dialogue really presents a lot of depth to what the characters have to say. Technology plays a huge part as we focus on “electronic windows to nowhere”, so we don’t see what’s right in front of us. It’s an example of the many brilliant notions packaged up in this episode and compliments the bloody resolution met when two New Worlds collide. The twisted narrative layered with terror, gore, thematic elements, and emotion, make up a feast of perspective with a side of humor and a splash of historical education. It welcomes you to explore some of the more unsavory facts behind our nation’s origin celebration. In the continuation of impressive holiday horror, Pilgrim is a wicked entry of Into The Dark with well-executed attitude and delicious style.

“Pilgrim is a wicked entry of Into The Dark with well-executed attitude and delicious style.”

Are you streaming the second season of Hulu and Blumhouse’s Into The Dark anthology series? What do you think of the series’ second episode, Pilgrim? Let us know your thoughts over on Twitter, Reddit, or in the Horror Movie Fiend Club on Facebook.

TLDR Pilgrim may be based on a true story, but it finds a foundation in severe self-awareness and relevant meaning. The twisted narrative layered with terror, gore, thematic elements, and emotion, make up a feast of perspective with a side of humor and a splash of historical education. It welcomes you to explore some of the more unsavory facts behind our nation's origin celebration. In the continuation of impressive holiday horror, Pilgrim is a wicked entry of Into The Dark with well-executed attitude and delicious style.