[Review] Love in a Time of Jumpscares, or- THE CONJURING: THE DEVIL MADE ME DO IT

Hollywood’s Ed and Lorraine Warren have been through a lot. A run-in with an evil nun, an Annabelle doll that just won’t quit, farmhouse poltergeist after farmhouse poltergeist- and never has their love been tested. That is until they get wrapped up in a precedent-setting crime case with the lofty task of proving a man was possessed by a demon while committing first-degree murder in The Conjuring: The Devil Made Me Do It.

Based on the trial of Arne Johnson, oft dubbed ‘The Devil Made Me Do It’ case, the third installment of The Conjuring loosely, and with great horror-minded dramatization, depicts the events that occurred in Brookfield, Connecticut through 1981. The Warrens — both the real-life self-proclaimed demonologists and The Conjuring’s darlings portrayed by Vera Farmiga and Patrick Wilson — are contacted by the Glatzel family after their 11-year-old son David (played by Julian Hilliard) comes down with a bad bout of demonic possession.

During a hardly routine exorcism in which the Glatzel’s dining room plays host to a demonic tornado straight out of Oz, Arne (Ruairi O’Connor), older sister Debbie Glatzel‘s (Sarah Catherine Hook) beau, compels the demon out from little David and into himself. In the chaos, Ed Warren goes into cardiac arrest, and questions of where? and who with?  (re: the demon) fall by the wayside. Everyone goes back to their merry lives, apart from Ed, who gets a cool cane and a bottle of heart medication.

The not-so-dormant demon takes hold of Arne not long after, ‘causing’ him to stab his landlord to death in the full throws of a Blondie-induced possession. (Haven’t we all been there.) With Arne now facing first-degree murder charges, Lorraine and a less-than-100-percent well Ed convince the defense lawyer to argue “Not Guilty by Reason of Demonic Possession”. For the first time in American History. Not only is the pair going to have to send this demon back to hell, but they’re going to have to prove it even exists.

Directed by Michael Chaves from a screenplay by David Leslie Johnson-McGoldrick (Orphan), The Conjuring: The Devil Made Me Do It returns us to the horror franchise’s main protagonists after four consecutive spin-offs: Annabelle: Creation, The Nun, The Curse of La Llorona (also directed by Chaves), and Annabelle Comes Home. The Warrens are the heart of this universe, and it’s been a while since they’ve been front and center. But after nearly five years exploring the terrifying trinkets and demonic dolls of their at-home-museum, the third (but actually eighth) installment of The Conjuring is going to have to up the ante.

And what else is The Conjuring known for? Jumpscares.

Typically, a Conjuring film lands on a small assortment of terrifying silhouettes and sticks with them. The Devil Made Me Do It is no different. The film takes great pleasure in having the demon du jour sprint full speed at the camera after a prolonged pause on empty darkness, pop up in a number of shadowy corners, and at one point, even gallivanting about with a water bed. The scares are always effective and never cheap, but they don’t fit into the story nearly as seamlessly as their predecessors. Every scare sequence about to happen feels like a scare sequence about to happen, and audiences come well primed for every two-minute detour into terror. 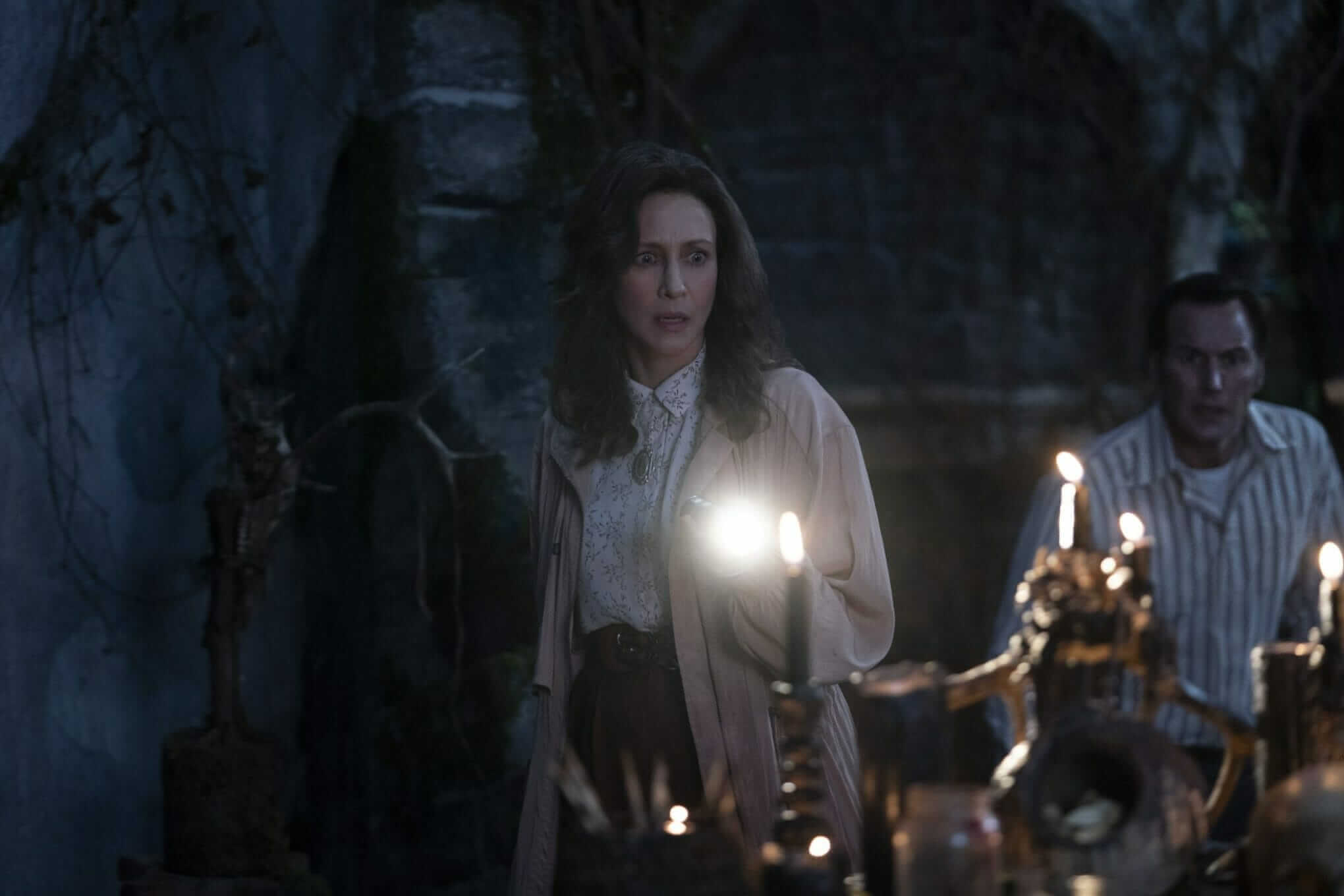 The Conjuring: The Devil Made Me Do It also takes some creative visual departers for the main throughline. The previous Conjuring films were deeply routed in farm country, and the color palette even at nighttime very rarely deviated from warm browns and mustardy yellows. Now armed with the more blue-hued and high-contrast palettes of its spin-offs, The Conjuring 3 takes some colorful punches; blown-out pops of red, blue-hued timelapses in the forest, and a sickly green glow on a no-nonsense trip to the morgue. (I’m lying, there was nonsense.)

A bit of a slow starter, The Conjuring: The Devil Made Me Do It really comes into its own when the Warrens go full Clarice Starling. Instead of unpacking their suitcases at a single-family dwelling as we’ve become accustomed, they hit the road; investigating a previous murder/suicide, deciphering tomes on Satanism, and giving it the full Mystery Inc. try.

If you’re looking for a paranormal spookfest, you can do no wrong with an installment from The Conjuring universe. And while the story isn’t as strong as its predecessors, The Conjuring: The Devil Made Me Do It is a mighty fine addition to the fam.

The Conjuring: The Devil Made Me Do It is in theatres and available for at-home rental on June 4th. Let us know your thoughts on the Conjuring Universe over in the Nightmare on Film Street Discord! 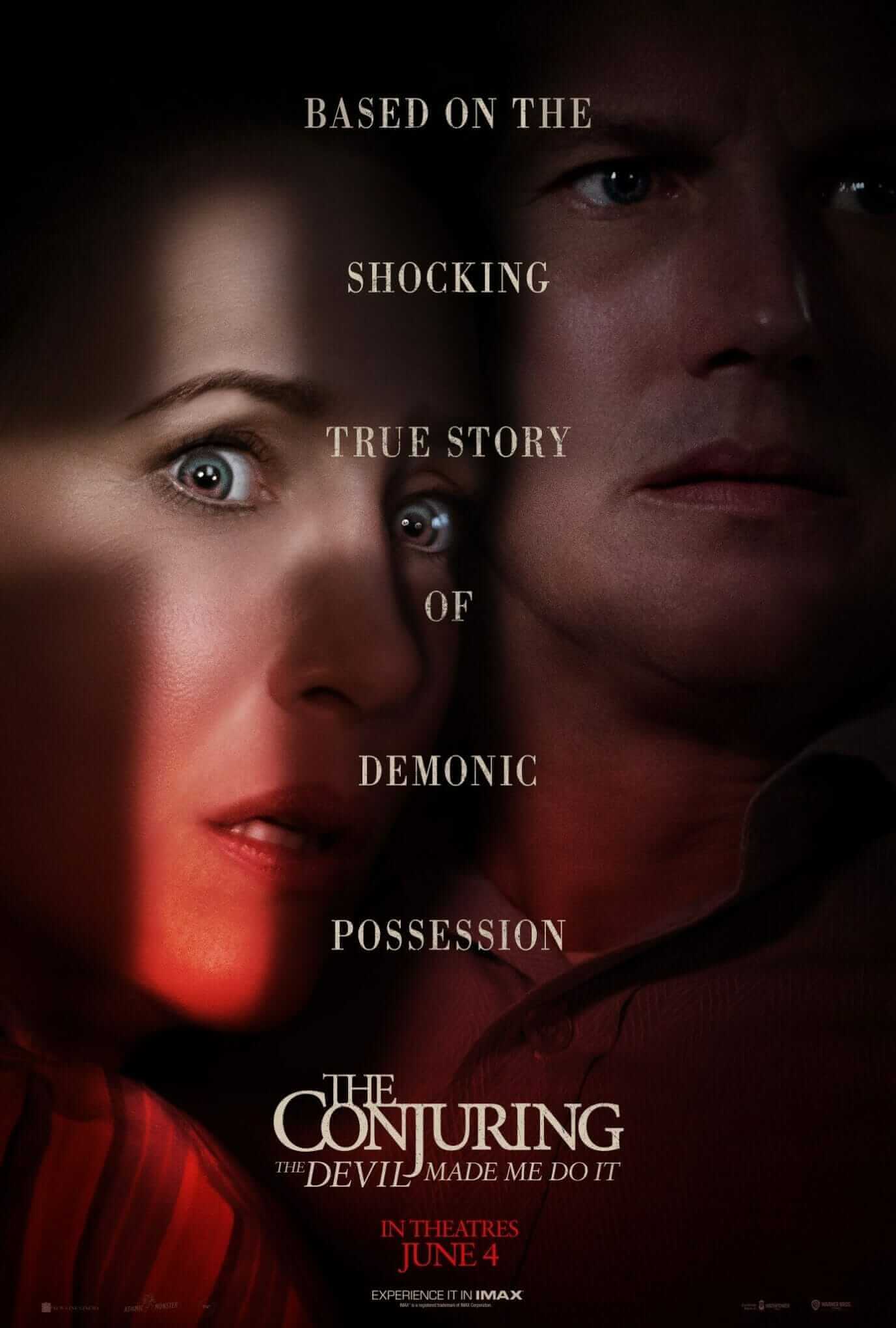 TLDR If you're looking for a paranormal spookfest, you can do no wrong with an installment from The Conjuring universe. And while the story isn't as strong as its predecessors, The Conjuring: The Devil Made Me Do It is a mighty fine addition to the fam.