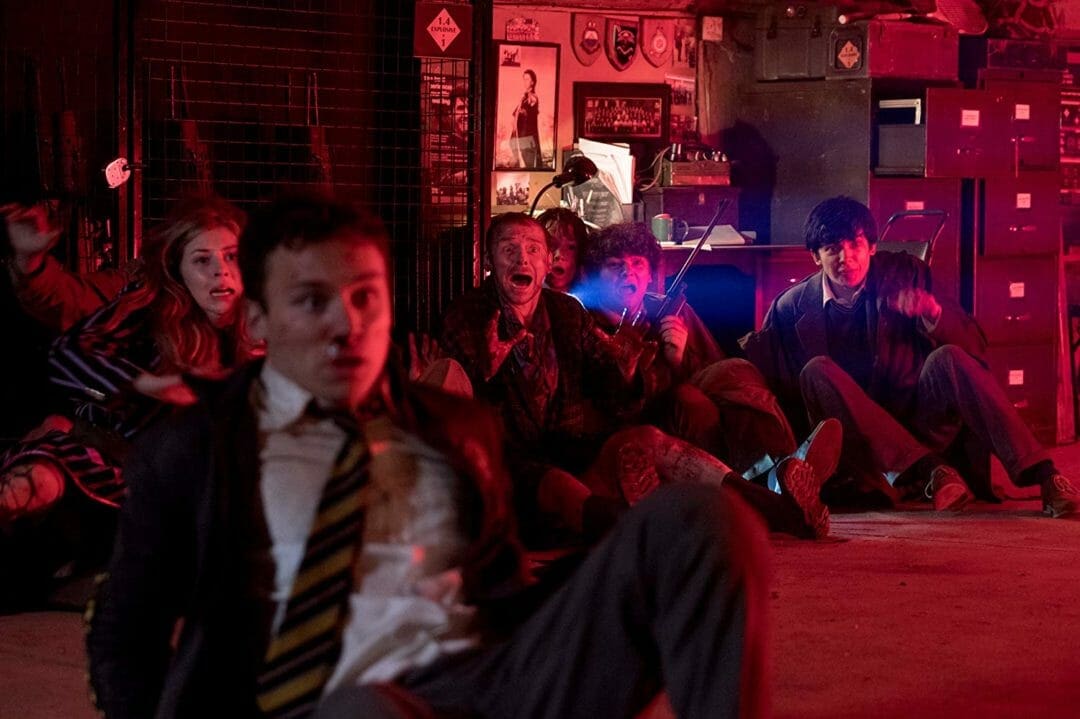 For those of us who delight in seeing Nick Frost and Simon Pegg reunite on screen, Slaughterhouse Rulez held the promise of being another gory giggle-fest. But the duo who teamed with Edgar Wright to bring us the Cornetto Trilogy play more of a supporting role in this teen-lead monster movie. Fans will find that, while our dynamic duo rarely have screen time together, the film is still a labor of love for Pegg and Frost, whose Stolen Picture production company oversaw the release. Crispin Mills (A Fantastic Fear of Everything) directs the quips and quivers, but not quite as quickly as you might be expecting.

Slaughterhouse Rulez follows new student, Don “Ducky” Wallace (Finn Cole, Peaky Blinders), on his enrollment into the illustrious school. But what Ducky finds upon arriving is more of an eerie institution with half-witted faculty and a grim group of pupils who get sorted into houses like a Hogwartz from hell. The film plays like a dark teen comedy with supernatural flair, and I was honestly surprised by the serious subject matter the film tackles (depression, suicide, sexuality, etc.) while also retaining its sense of humor.

Simon Pegg is featured as the lovelorn schoolmaster, Meredith Houseman, who is pining after his former girlfriend who has moved on to bigger and better things (played by Margot Robbie, Suicide Squad). Michael Sheen (Good Omens) is the Headmaster, dubbed The Bat, who warns the students to stay out of the forest surrounding the school. (And if that isn’t Dumbledore-esque enough for you, the flaxen-haired head boy, Clegg (Tom Rhys Harries), is our angry antagonist). What The Bat fails to explain to the students is that a sinkhole has opened due to the fracking being allowed on the school grounds. While the Headmaster has turned the other cheek and ignored the dangers of digging too deeply, something in the earth has been disturbed. Nick Frost’s character, Woody, is among the protesters camped out in the forest who are against the fracking, but the damage has been done. 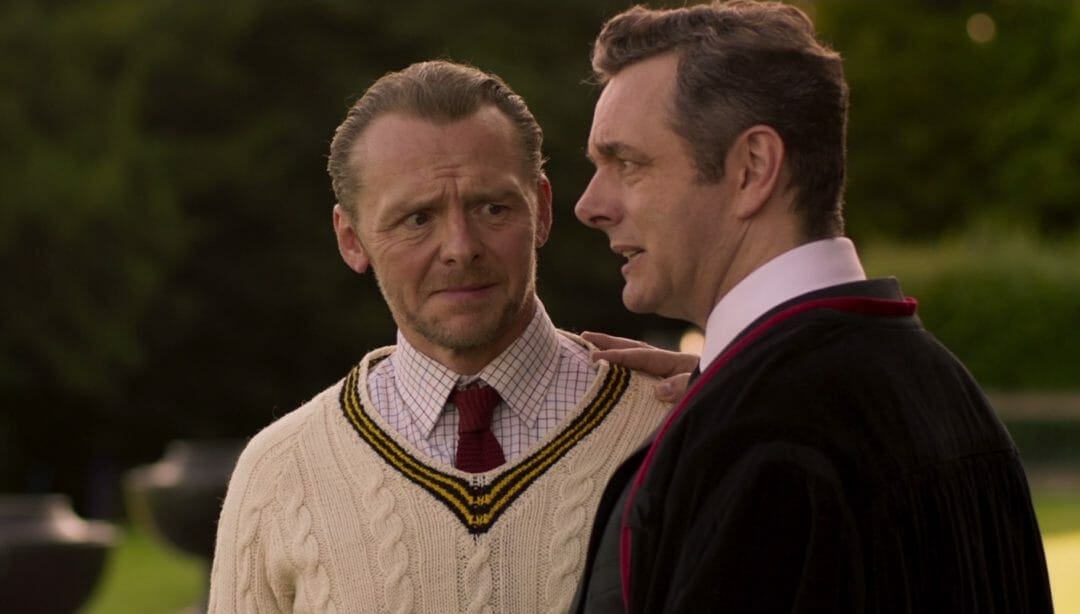 Let the blood bath begin, right?! Well… sort of. Yes, the setup sounds exciting, however, we don’t really see much of the action or attacks until nearly an hour into the film. In the meantime, the dramedy unfolds in typical teen fashion while we get glimpses of grimness and dread. Asa Butterfield (Miss Peregrin’s Home for Peculiar Children) plays Ducky’s roommate Willoughby Blake, who helps to propel the mysteries along while throwing in dashes of witticism. Clemsie Lawrence, (Hermione Corfield, Pride and Prejudice and Zombies) is the popular girl who is kinder to Ducky than you’d expect. They make up just a small part of the rag-tag squadron of teens that are forced to fight for their lives against the monsters turning the school grounds into a feast.

The students at Slaughterhouse seem more capable than the adults by far, which adds to the fun and slapstick humor. Michael Sheen is deep in denial as The Bat, who dotes more on his dog than he does on the students or their wellbeing. Simon Pegg’s Houseman, when not falling to pieces over his love life, is more interested in his students than the Headmaster, but still can’t always get beyond correcting their grammar, even in the most dire situations. Woody, Nick Frost’s eco-obsessed, anti-fracking figure leads the group of activists in the forest, but may have just lead them to their doom. 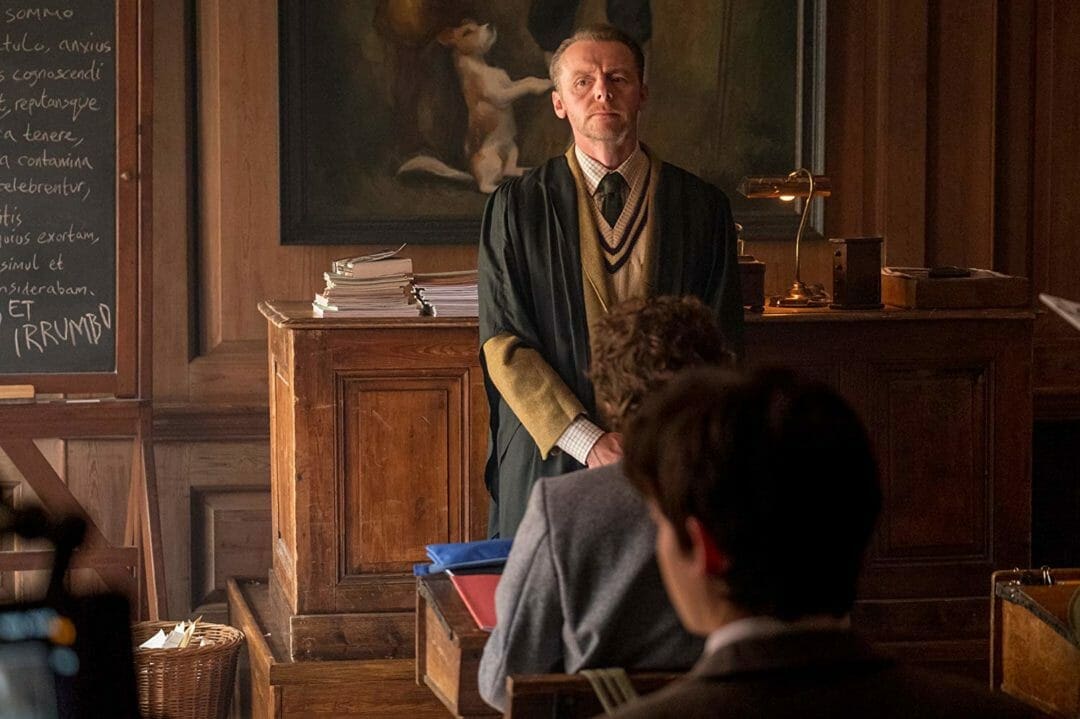 There is a foreboding frivolity about the film that is enjoyable despite the lack of gore until the final 45 minutes. Once the horror hits, though, the blood and laughter flow steadily. The creatures awakened from the nearby fracking are almost a cross between the terror dogs in Ghostbusters and the subterranean grubs from Tremors. Not only are they creepy to behold, but they are huge and deadly.

The practical effects of Slaughterhouse Rulez are well done and rewarding once they arrive and, along with the language in the film, help earn its R rating. The cinematography is slick and snappy and the soundtrack holds up to the horror and action, making this creature-feature-meets-teen-dramedy work well in this British schoolyard setting. The acting is enjoyable, the laughs come easily, and the blood and guts do arrive, even if it’s a bit longer of a build-up than one might expect.

Slaughterhouse Rulez is available now to rent on VOD or purchase. What did you think of the film? Share your thoughts on the film with us on Twitter, the official NOFS subreddit, and Facebook in the Horror Movie Fiend Club. TLDR The quips and quivers are delivered, but not as quickly as you might expect. Once the horror hits, though, the blood and laughter flow steadily.