[Review] WHY DON’T YOU JUST DIE! Buries The Hatchet in Family Discord With Rebellious Action

Meeting the family of your significant other is nothing to die over, but some cases might prove otherwise. Why Don’t You Just Die! is not just a selective catchphrase screamed when it comes to rebelling against certain expectations, it’s the catchy title on one of Russian cinema’s bloody good dark comedies. Debut feature film director and writer Kirill Sokolov has taken his talent for producing tremendous shorts and his passion for dark comedy and turned out both to craft a grand statement in the genre play. Channeling an appropriate amount of Park Chan-wook’s bare-knuckled hits and the contemporary western flair of Quentin Tarantino (and a dash of Edgar Wright’s style of comedy), Sokolov has begun his own riot of choice and delivers original, dangerous material with Why Don’t You Just Die!.

The battle royale commences as (according to the official synopsis) “Matvei (Aleksandr Kuznetsov) has just one objective: to gain entry to his girlfriend’s parents’ apartment and kill her father Andrei (Vitaliy Khaev) with a hammer to restore her honour. But all is not as it initially seems, and Matvei’s attempts to bludgeon the family patriarch to death don’t quite go to plan as Andrei proves a more formidable – not to mention ruthless – opponent than he anticipated… and Matvei, for his part, proves stubbornly unwilling to die”.

“[…] a wild ride with a bizarre vibe that resembles the comedic, treacherously venomous style of Kill Bill.”

Filled with literal slapstick violence and smart technique. Living up to the critical acclaim that has poured out from the reception at global festivals, Why Don’t You Just Die! knocks it out of the park or to the ground, so to speak. Refusing to go quietly, this film stands strong as the ultimate winner in its own right and has deservedly collected the New Flesh Award for Best First Feature and Silver Audience Award at Fantasia, Best European Feature Film at MOTELx, Best Director at Fantaspoa, Best Feature, Best Director and the Best VFX Awards at Grimmfest. Rebelling against traditional humor that relies on wordplay and heavy styling, Sokolov manages to steady and control a rough and tough narrative with a bark that is just as big as its bite.

It’s very rare that a genre film goes for the jugular so quickly, but it seems to be a trend and is one that Why Don’t You Just Die! uses as a theatrical advantage. It’s a full 90 minutes of completely off-the-wall action, but the mood really catches before the opening credits even hit. Building intensity and continuing that momentum throughout, this film is a wild ride with a bizarre vibe that resembles the comedic, treacherously venomous style of Kill Bill. Moving from uncomfortable to borderline outlandish, the viewer is treated to careful scenes decorated with high octane energy and some entertaining viewpoints. The camera work varies in effect, keeping the perspective fresh with a deliberate hint of incoherent chaos.

Exploding with relatively entertaining fight sequences and brutal blows, Why Don’t You Just Die! is a unique exercise in action horror. The stunt work and choreography gives the film a praiseworthy level of relentless activity. The limited dialogue serves its purpose and allows viewers to rely on the application of both sound, action, and reaction. It’s every bit as angry and vicious as a sturdy hammer waiting to drop. Throughout all of the film’s practiced brutality, your mind is often reminded of the curious motives hiding beneath its studded exterior cushion. Why Don’t You Just Die! is visually gripping with a mean resilience that nicely matches the unstoppable attitudes of each adversary. 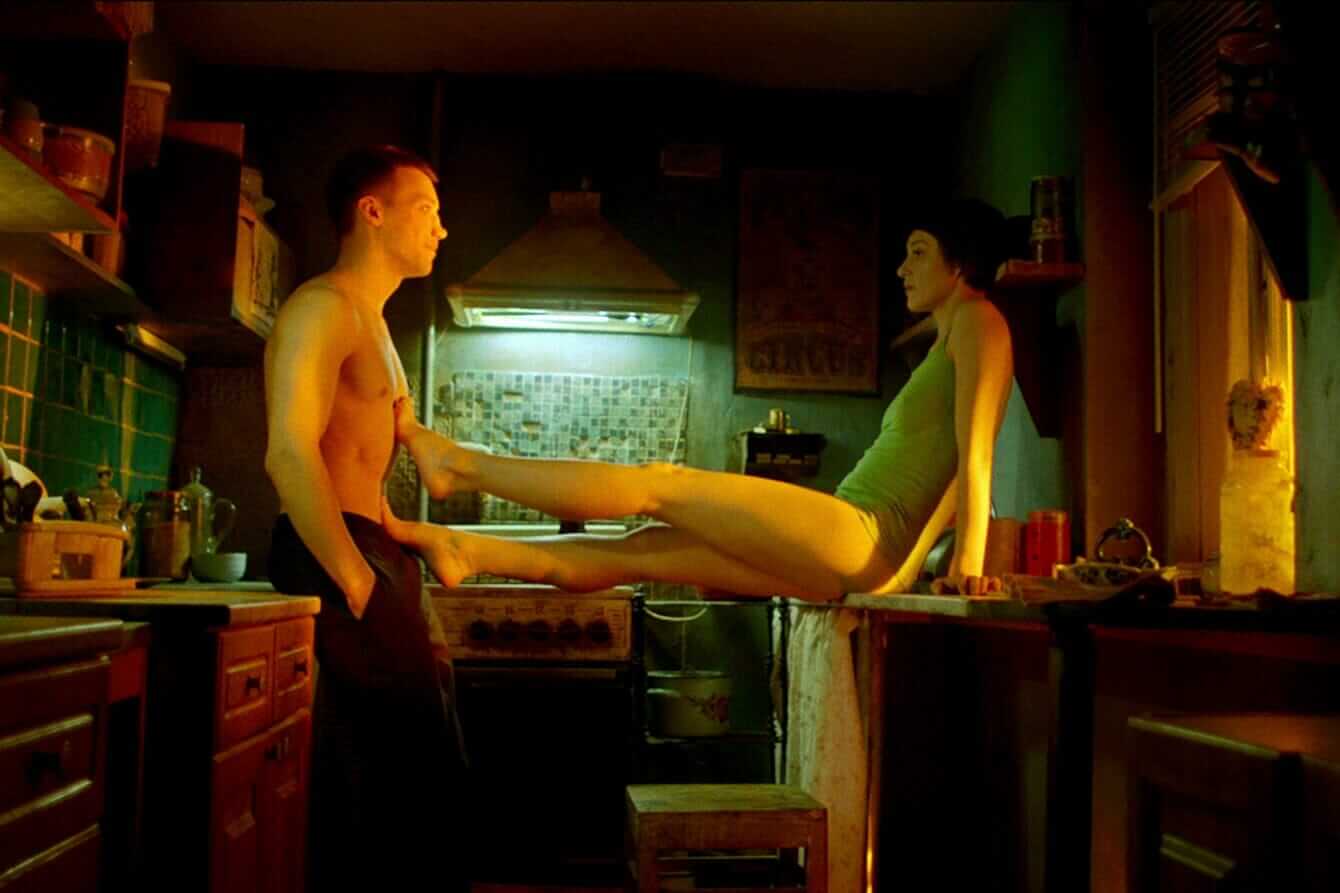 Giving viewers time to catch their breath, Why Don’t You Just Die! utilizes its second act as a means for time out. Following its initial start, it’s hard to believe there’s more to this story than its splatter-punk camp and gross mechanics. Expanding on the relationship between Matvei and Olya, the direction takes a brilliant focus to the two lovers and forces the lens into close-ups and intimate frames. The entire narrative shifts to more serious subject matter and shows the film’s true intention for the bloody material. Somehow the situation presented by Olya is more shocking than any of the bloody punch-outs. The middle moving parts of this film take a brief step back from a-ha moments and gore to allow viewers a chance to connect with the characters and their motives. While it never fully, truly breaks from its unabashed grit and comedy, Why Don’t You Just Die! fluidly filters exposition through flashbacks and gives purpose to two worthy opponents. There’s a beating heart somewhere deep inside this film, we just need to wait until it’s ripped from the proper cavity and exposed.

As the real plot progresses and the artificial surface of the film’s circumstances is kicked well beyond a breaking point, a web of secrets safely unravels. There is no shocking third-act trick that is built up for a mighty big reveal simply because this story does not need one. Elaborating on its decisively jagged texture, family discord and the associated clunky dynamics really brings out the best in the performances. Emotions, whether raw and ugly or animated and humorous, are radically portrayed by dedicated talent that enhance Matvei and Andrei’s dirty showdown. The pacing is broken up with skilled selection and makes for an eclectic experience. Further touching on themes of entitlement and gilded youth, Why Don’t You Just Die! appropriately bleeds rebellion and ambition.

Breaking up the blood scape and physical torment, Sokolov spikes his martial flick with quirk and bad manners. The bits of comic relief come steadfast and with lively intention. Somehow, and without indignation, every act feels like the third act in the film’s confident compilation as a whole. While Why Don’t You Just Die! does cash in on intermittent violence and is largely far-fetched, nothing is contrived or forced. It’s an overall risky flick, further playing on whacky discomfort with its unusual palette of red and green hues, but no element ever feels out of place. Not only are the fights epically induced with adrenaline and carnage, the narrative itself takes on a Shakespearean kind of bravado that weaves a complicated dynamic keeping the heart of the matter pumping.

Adapting the level of brevity to each pulse of humor and every level of possible deception, Sokolov keeps the content tough. Through justified violence and vengeance, Why Don’t You Just Die! is not afraid to hit unorthodox nerves in its clever repertoire and daring fight against standard stories of revenge. Thugs become sympathetic and fathers turn into enemies, betrayal seems likely, all of which you’d never expect even at the film’s midpoint. If there is ever a moment where viewers find the film hitting an instance of lag, it’s extremely short-lived because playing possum is one of this film’s major, most effective tactics. Why Don’t You Just Die! refuses to leave the arena without putting up one hell of a fight. Don’t underestimate it even for a second.

“Why Don’t You Just Die! is not afraid to hit unorthodox nerves in its clever repertoire and daring fight against standard stories of revenge.”

Why Don’t You Just Die! is not for the faint of heart, but it is for those who can take a punch. On his own film, director and writer Sokolov commented, “Despite our exaggerated use of genre tropes and all the flashy effects, Why Don’t You Just Die! remains, for me, an incredibly personal and sincere story. The film’s inherent violence is the result of reflection on the realities of life in Russia, modern relationships, and societal attitudes. The gallows humor which pervades the film is the only true reaction whatsoever to all of this. The film is intended as an emotional rollercoaster, making the audience laugh, cry, and laugh again – but then immediately feel a sense of unease for having laughed.” Sokolov’s aim proves to be an honestly direct hit on a very volatile target. 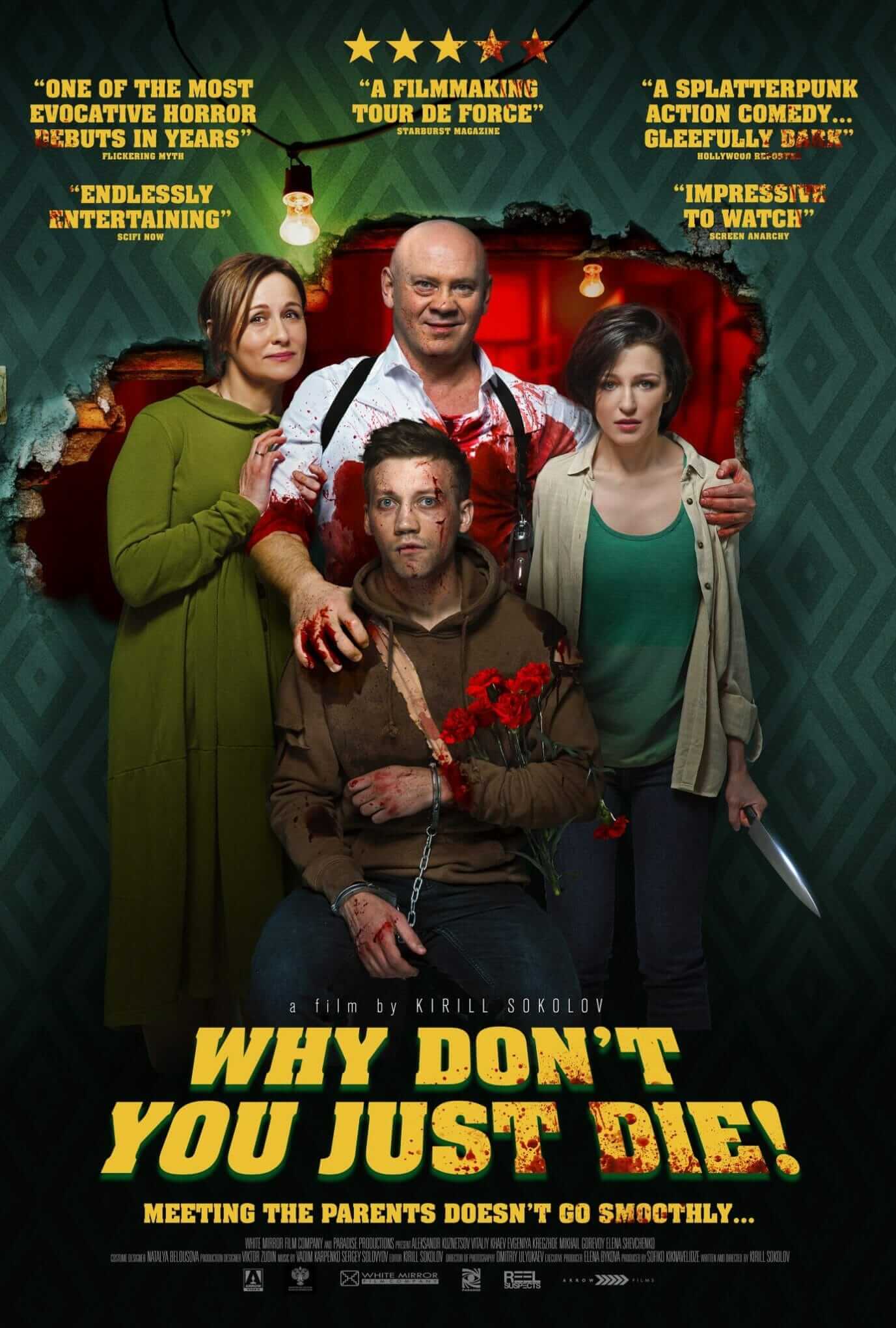 TLDR Through justified violence and vengeance, Why Don’t You Just Die! is not afraid to hit unorthodox nerves in its clever repertoire and daring fight against standard stories of revenge. Thugs become sympathetic and fathers turn into enemies, betrayal seems likely, all of which you’d never expect even at the film’s midpoint. If there is ever a moment where viewers find the film hitting an instance of lag, it’s extremely short-lived because playing possum is one of this film’s major, most effective tactics. Why Don’t You Just Die! refuses to leave the arena without putting up one hell of a fight. Don’t underestimate it even for a second.