Halloween Ends returns us to a traumatized Haddonfield, shell-shocked from the events of Halloween night 2018. Broken and skittish from the disappearance of Michael Myers, the community turns its anger onto high-school babysitter Corey Cunningham (Rohan Campbell) when the child under his care dies in horrifying fashion. As the town slowly rips itself apart at the seams, Laurie Strode (Jamie Lee Curtis) and her granddaughter Allyson (Andi Matichak) try their best to move on from their pain and loss.

Laurie decides to leave the trauma of her past behind in the form of writing a memoir, while Allyson seeks relationships to end her feelings of isolation. Haddonfield isn’t so ready to let them move on, though, as the citizens continue to lay blame for Michael’s rampage at their feet. When gruesome murders begin to plague the town once more, Laurie knows that evil has returned once again. She must approach it head-on, willing to revisit her haunted past and do what’s necessary to protect Allyson and bring peace back to a community haunted by The Boogeyman.

“…no Halloween film has ever felt anything like Halloween Ends“

Halloween Ends attempts to balance a storyline previous entries have only dared to tease, alongside the conclusion of the heart and soul of the Halloween franchise – Laurie Strode vs. Michael Myers. For those seeking a physically drawn out, ultra-satisfying wrap-up, it may miss expectations. The significance and grandeur of the “final battle” isn’t given quite enough time for a franchise that has seen Jamie Lee Curtis appear in six entries. Then again, the David Gordon Green trilogy has never been deeply interested in this “vs” storyline and has openly said so throughout the previous films. Michael doesn’t care about Laurie, much less think about her at all. Instead, the focus of Halloween Ends returns to the everlasting effects of trauma experienced by survivors of horrific violence.

While the big battle doesn’t quite hit expectations, Halloween Ends impressively dares to pursue the mystery John Carpenter established 40+ years ago in a manner unlike anything we have ever seen from a Halloween movie: What is The Shape? This movie explores some seriously bold territory, in more ways than one (I know, I know, this triggers flashbacks of Rob Zombie’s Halloween 2 and Halloween 6‘s Cult of Thorn, often objects of scorn for Halloween fans). While not flawless, Green & Co navigates these uncharted waters in a manner respectful of the franchise lore.

The audience that Halloween Ends may punish is the one seeking a conclusion very similar in tone to the rest of the David Gordon Green trilogy. Halloween (2018) and Halloween Kills weaved together somewhat seamlessly in their conjoined mission as the ultimate slasher sequel, jettisoning almost every previous film in the franchise while also working within a universe where every single one can be tangibly felt. While other entries are very present here, no Halloween film has ever felt anything like Halloween Ends. For a franchise’s 13th entry, this was the correct choice.

The radical departure in tone is the result of multiple shifts in storytelling, most notably that Halloween Ends at its core is a character-driven, drama-heavy slow burn not seen in this franchise since Carpenter’s original. It’s not interesting in the creative ways Michael eviscerates his victims, although the brutality from Halloween Kills definitely resurfaces at a holy shit! level.

It may not be much interested in Michael at all, as the character doesn’t receive nearly as much attention as you’d expect or, frankly, hope for. Rather, we are thrust back into the aura and unsettling mystery of The Shape of evil, its insidious and infectious nature, and the devastating effects of those that happen to cross its path. I’ve always placed the Halloween movies on their own unique pedestal, as it has often tried to be something more than just a typical slasher franchise, and Halloween Ends absolutely vindicates this belief.

The choice to return the franchise to its character study roots pays off richly due to the performances of Jamie Lee Curtis and Andi Matichak. Curtis’s final turn as Laurie blends the whimsical innocence of her original appearance with the battle-scarred shut-in from 2018, resulting in (hands-down) her greatest portrayal of the character ever. In a different genre not so unfairly scorned as horror, whispers of Oscar nominations would be heard. Matichak is finally allowed the necessary screen time to explore her character fully, capturing her newfound importance to the driving theme of the trilogy and running away with it. Make no mistake, Halloween Ends lays the heaviest character workload seen in a Halloween film ever, and they do not disappoint.

Michael Myers (aka The Shape) in Halloween Ends, co-written, produced and directed by David Gordon Green.

Not all is different, though. The character of Haddonfield itself is explored further since its time in the spotlight of Halloween Kills. If you thought the community was damaged by the events of 1978, you haven’t seen anything yet. As someone who has always been drawn to the collateral damage The Shape inflicts upon Haddonfield, Halloween Ends rewards this fascination yet again.

Radical departures aside, Green and crew continue the phenomenal job of emulating the Halloween ancestors that came before. Halloween (2018) exists somewhat as a soft reboot/reintroduction to the story. Halloween Kills follows a very similar formula as 1981’s Halloween II, both taking place the same night as their predecessors. Halloween Ends embarks on the very bold path of vaguely mirroring the infamous Halloween III: Season of The Witch and even shades of Halloween 4: The Return of Michael Myers.

For franchise fanatics such as myself, elements of the original story for Halloween 4, when John Carpenter and Debra Hill were still involved, can be found in Halloween Ends. To put a bow on this, in a bit of astounding coincidence, all three David Gordon Green entries have been released exactly 40 years from the original three Halloween films.

What impresses me most about Halloween Ends and Green’s trilogy as a whole is there was clearly a plan from the very beginning. Despite both rave and rancid reviews, it doesn’t feel like the filmmakers never deviated from their central theme. They had something to say, and they said it. We so rarely see a horror franchise in the same creative hands long enough to start and finish their story, much less in the hands of creators with such love and respect for what came before like David Gordon Green and Danny McBride radiate.

“Leave it to Halloween to trailblaze the horror genre once more.”

This trilogy was not for every Halloween fan (a task that may be impossible for a franchise as beloved and filled with such unique entries as this), but it certainly was for me. Halloween Ends may not operate as a fitting conclusion to the series as a whole, but it does close the book on Green’s trilogy. While I’m positive we’ll see Michael Myers return sooner rather than later, I’m not so sure we’ll ever see anything like this trilogy again. Leave it to Halloween to trailblaze the horror genre once more.

David Gordon Green’s Halloween Ends is playing in theatres and streaming on Peacock right now! See the final showdown between Laurie Strode and Michael Myers, just in time for Halloween. And afterward, share your thoughts with us! We’d love to hear what you thought of this epic conclusion over on Twitter or in the Nightmare on Film Street Discord! Not a social media fan? Get more horror delivered straight to your inbox by joining the Neighbourhood Watch Newsletter. 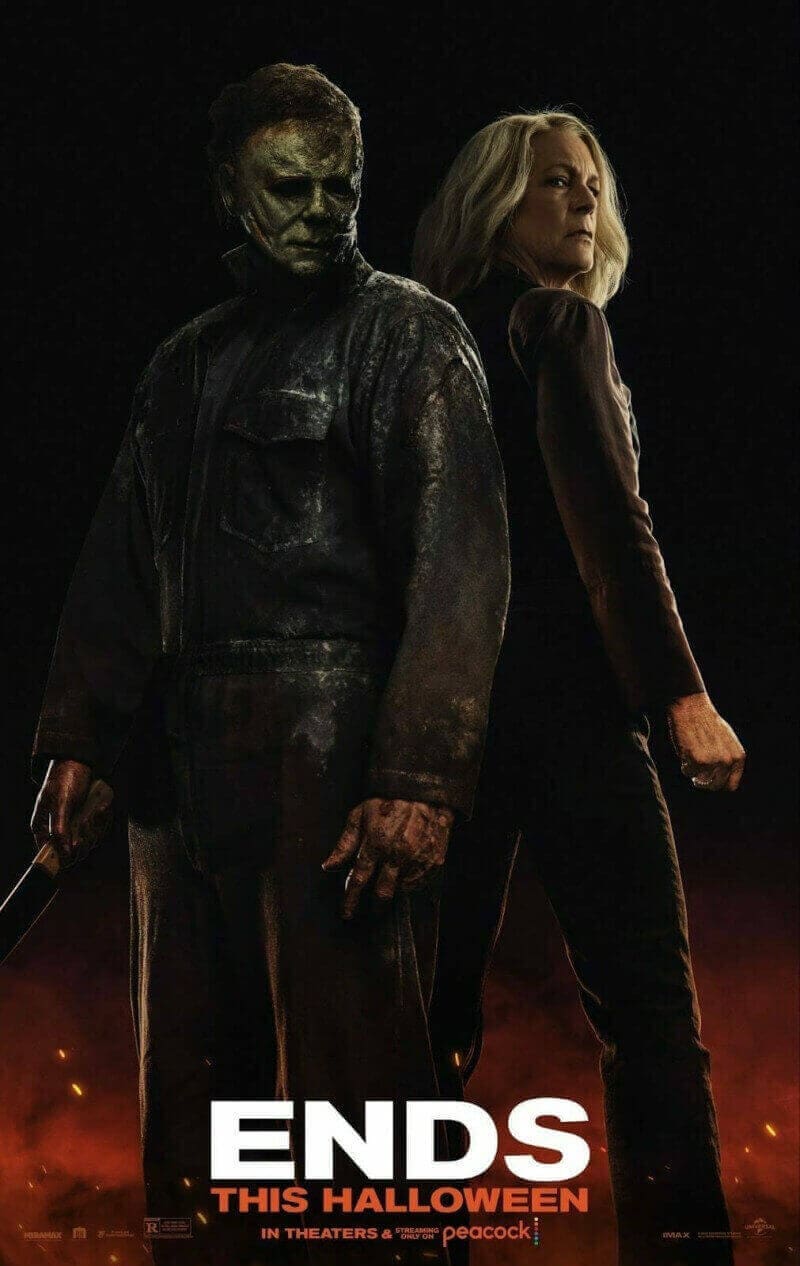 TLDR This trilogy was not for every Halloween fan, but it certainly was for me. Halloween Ends may not operate as a fitting conclusion to the series as a whole, but it does close the book on Green’s trilogy. While I’m positive we’ll see Michael Myers return sooner rather than later, I’m not so sure we’ll ever see anything like this trilogy again. Leave it to Halloween to trailblaze the horror genre once more.