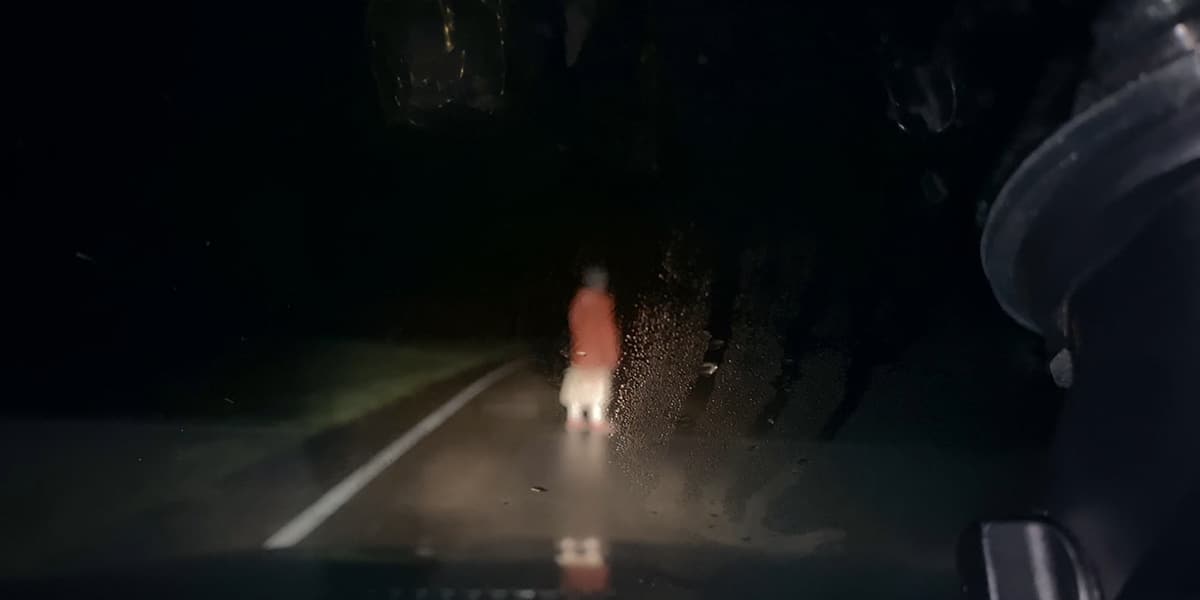 One eventful night of chaos. It’s a formula ideal for the found-footage horror, and one that’s been utilized to perfection in films like zombie-outbreak gone wild REC (2007), British mockumentary Ghostwatch (1992), and a little film about zoom seance gone wrong Host (2020); the feature debut of director Rob Savage.

Host took pandemic audiences by storm, scoring Savage a three-picture contract with Blumhouse. Dashcam is the first, celebrating its world premiere in the Midnight Madness slate of the Toronto International Film Festival just shy of a year after the deal was inked.

Keeping in the theme of his screenlife debut, Savage buckles us in for Dashcam as the omnipotent audience of a zany livestreamer who’s hellbent on recording the night’s events, no matter what unfolds. And believe me, shit unfolds.

Written by Savage alongside previous Host collaborators Gemma Hurley and Jed Shepherd, Dashcam drops us into the world of Annie Hardy (an exaggerated performance of herself from real-life indie-rocker Annie Hardy), an outspoken wildcard with controversial opinions abound. We see the world through Annie’s Livestream “Bandcar”; in which she drives around during the height of the COVID-19 pandemic (I’m trying to describe this super impartially for when someone reads this not in present-day and maybe has to say ‘what was the pandemic like?’) shouting anti-vax and anti-mask rhetoric to the sheeple libtards (read: people who believe in masks and vaccinations) amidst a live improvised rap-show. It’s internet culture stuff.

One of those such sheeples is her past-bandmate Stretch (Amar Chadha-Patel), who gets sucked into Annie’s tornado of trouble after she deposits herself at his doorstep in the UK. After Stretch’s girlfriend (HOST alumni Jemma Moore) threatens to kick Annie to the curb for her evil ways, baby- Annie snatches Stretch’s car keys and sets off for a Grand Theft Auto: UK Edition of her livestream.

Annie’s joyride soon takes a turn for the nightmarish, when a serendipitous Uber Eats meeting has her giving a lift to a catatonic old woman named Angela. The situation feels off from the getgo, but shit really hits the fan when Annie’s livestream leads a few unwanted guests right to her. Like Annie, Angela’s got a few demons of her own. ..And one of them happens to be a woman armed with a shotgun.

Though we spend the majority of our night in and out of cars, Annie’s a diligent livestreamer who is never separated from her camera for long. Throughout Annie’s joyride of terror, Dashcam tumbles through a flurry of ever-changing setpieces that play out like the checklist of a horror fan’s dream locations.  Lost in the Woods – CHECK. Creepy Abandoned Carnival – CHECK.  An Authentic British Fish n’ Chip Shop – CHECK.

Dashcam is a wild ride that’s going to be hard to stomach for some. Not just because its shaky nature is straight out of The Blair Witch Project playbook, but because it confronts the present-day disparity of opinions that are far too easy to insulate from in modern-day society.

Annie is a tough pill to swallow. She’s an atypical “final girl” in that most audiences are going to be rooting for her to bite the bucket, purely for her controversial opinions alone. Annie’s as as irrideemable as they come, making no attempts to win us over with her crass raps and immature humour. It’s weirdly refreshing to experience a night of terrors through the perspective of a wholly unique character, whether you like that unique character or not. And if you fall in the “not” category, thankfully Annie’s ex-bandmate Stretch is a certified sweetie pie and he helps to soften Annie’s edges whenever he plays co-pilot.

If Dashcam doesn’t pull any punches with Annie’s abrasiveness, it certainly doesn’t pull any stops with the terror. The film dives right into deep end, plunging audiences into a full-blown nightmare. Boasting perfectly-timed jumpscares, a pitch-black murder scene that’ll leave you gobsmacked, and some of the most insane car crash POVs ever put to screen. Car accidents are a cinema staple, but so few are executed strictly to terrify. Dashcam will have you second-guessing ever getting behind the wheel of a car again. Practical horror fans will also be treated with a few gratuitously delicious displays that flash on the screen in grotesque and sometimes stomach-turning accuracy.

To spend too much time on the scares of Dashcam would spoil the plot, so it’s best just to take the drive for yourself.

“The Blair Witch Project for the internet era”

Dashcam is the Blair Witch Project for the internet era, harnassing the current climate of polarized social politics and pandemic exhaustion to keep audiences in a constant state of unease before deliberately steering head-on into the murky depths of the horror genre. There is no reprieve here, and you won’t be permitted to come up for air.

Dashcam celebrated its world premiere at the Toronto International Film Festival. Are you stoked for Savage’s Host follow-up? Chat with the fiends over in the Nightmare on Film Street Discord!

TLDR; Dashcam is the Blair Witch Project for the internet era, harnassing the current climate of polarized social politics and pandemic exhaustion to keep audiences in a constant state of unease before deliberately steering head-on into the murky depths of the horror genre. There is no reprieve here, and you won't be permitted to come up for air.