The Welcome To The Blumhouse double-feature series has officially begun, kicking off with Emmanuel Osei-Kuffour Jr’s Black Box and Veena Sud’s The Lie. Although a relative newcomer to the genre, Osei-Kuffour Jr as crafted a wonderfully dark story about parenthood that keeps its secrets well hidden, and features another eerie performance from fan-favorite contortionist Troy James (Scary Stories To Tell In The Dark).

We recently had the opportunity to sit down with Emmanuel Osei-Kuffour Jr to discuss his debut feature, and how he has come to appreciate horror as a platform to create conversations about important social issues, injected with a few good scares.

“I loved the concept of the black box, and I thought it was chilling…”

Jonathan Dehaan for Nightmare on Film Street: Congratulations on your debut feature! I really enjoyed it.

NOFS: Did you ever expect that your first feature would be a horror movie?

EOK: No actually, because I’ve done a lot of subtle coming-of-age dramas about kids so in no way shape or form thought it would be a horror film.

NOFS: Coming-of-age stuff is always sort of realization about yourself though so I think you’re still playing in the same arena.

EOK: Yeah, that’s something I’ve discovered about this genre as well.

NOFS: So how did you first come across the screenplay from Stephen Herman?

EOK: So, Blumhouse found a short film of mine. My manager sent them Born With It, which was my thesis film for NYU about a half black half Japanese identity issues in rural Japan, and they thought that my sensibility would lend itself well to Black Box. And so I read the script which was Stephen Herman’s early draft and I loved Nolan’s relationship with his daughter and his devotion to her. I loved the concept of the black box, and I thought it was chilling, but I also thought there was an opportunity to tell a story about a deeply flawed man that has to come to terms with some mistakes that he made in his past and become a better father for the sake of his daughter. That was what drew me to the story, the ability to tell that story and luckily Blumhouse and Amazon loved the idea, and they were on board. So I rewrote over a period of two months and we shot the film.

NOFS: What was it like trying to raft scares for the first time?

EOK: I watched a lot of horror films before I even pitched this. Not everything was an influence for the film but, you know, I watched early Guillermo del Toro films, I watched Ringu, the Japanese horror film, Cure, Audition– You know, really terrifying horor films. I revisited Jordan Peele’s Us, and I’ve always been a big fan of Get Out and M. Night Shyamalan’s Unbreakable and The Sixth Sense. In the beginning, I was trying to figure out what my lane was and I started to realize that, Unbreakable was a great- I wouldn’t say that visually, it was a reference for this film but that film was kind of my North Star in terms of realizing that I could tell a story that was really emotional and really heartwarming while also balancing those thriller/suspense elements really well.

NOFS: Nolan is a really interesting character and you capture him so well with Mamoudou Athie.

EOK: He’s a man who just doesn’t know who he is. He doesn’t feel comfortable in his own skin, he’s questioning everything. Prior to the start of the film, it’s been six months [since his accident] and he just doesn’t recognize anything or anyone around him. And I think that’s what Mamoudou has by nature, and there’s a reason that I thought it was only him to play this role. He obviously has this sensitive, quiet side to him, which, lends itself well to the idea of this perfect loving father but he also has an introspective side that is really magnetic, and I think is what draws you to him as an actor. Not even in this film but also in Sorry For Your Loss and The Front Runner, and really helps tell the story of a man with amnesia really, really well.

NOFS: You also have horror favorite Troy James [as The Backwards Man] in there. I’m sure getting him on set and calling action had to be pretty scary to be in the room with, right?

EOK: Not for me, but for Mamoudou it was [laughs]. Mamoudou is a very grounded [performer] and that’s one of the reasons I cast him as well. Actually, every actor in this film was very grounded and truthful. You know, I didn’t want to make a film that felt campy or anything, I wanted to feel- I don’t know if I should say this but, I wanted it to feel like a slie of life, it just so happened that horror things were happening. To get back to Troy James, [Mamoudou] wanted to see Troy do his thing for the first time when the camera was rolling, so he would always close his eyes during rehearsal, or he would turn around, and so when we turned the camera on him and asked him to react to, I think the first time we ever saw Troy James approach him was in the church, and Mamoudou’s reaction is his real life reaction to the man walking towards him. We kept Troy James on set even when we weren’t shooting him, so Mamoudou would have somebody to react to. I remember it being really hard to go the next day because he was just really disturbed. But it wasn’t disturbing for me at all because I worked with him like a month before to figure out the movements and various actions that he would perform in the movie and so I got used to it. I got used to a lot of things in this film that a lot of people find really creepy and scary.

NOFS: I believe it. I mean, my biggest concern being next to a guy like Troy James is that I wouldn’t know if he’s going hurt himself with the wild physicality of his performance.

OSK: He got tired often and so I had to watch for that. As Nolan starts to remember more and more about who he is, Backwards Man starts to become weaker and weaker so I adjusted his performance a little bit. It took a lot of energy out of them so that was the one thing that I had to really watch for, but I think that backward walk crawl is something that he’s really used to and is cool for him.

NOFS: It doesn’t sound like you watched a lot of horror movies growing up. Is that because you watched one that scared you and it left a mark? Or is it just something you’ve never really gravitated toward?

OSK: I thought that, you know, in order to really love horror films you had to love preachers or gore, or you just have to love to be scared. It’s like me and roller coasters. I’m not gonna ride them, there’s no real reason for me to ride them so I was like ‘Why would I watch a horror film?’. But I think as I matured as a filmmaker, and as I started watching films by M, Night Shyamalan and Jordan Peele, I started realizing that there’s an opportunity to comment on social issues or just issues that you care about, and I got into film to create conversations about issues that affect me or people I love, whether it’s family or friends. And so the idea of using a genre film, whether it’s a horror film or sci fi, or a thriller, to tackle issues that are important to me- in this case, parenthood- it became really freeing and exciting and now I watch a lot of horror films. I’m not going to say I’m watching everything. I like to pick and choose what I watch but, yeah, I think they’re really smart.

NOFS: Do you think that the horror genre space is something that you’re gonna continue to explore?

OSK: Yeah, for sure. I’m working on a miniseries right now that’s a horror.

NOFS: Last question, something I like to ask everyone, what’s your dream double-feature at the drive-in? If you could program one night at the drive-in what would you play?

OSK: Hmmm- One of them would definitely be Independence Day. The second one…Black Swan.

Emmanuel Osei-Kuffour, Jr’s sci-fi thriller Black Box is currently available on Amazon Prime as part of a double bill with Veena Sud’s The Lie in the Welcome To The Blumhouse series. Read our review of both films HERE, and be sure to keep an eye out for next week’s double-feature of Nocturne and Evil Eye. Let us know your thoughts over on Twitter, Reddit, or in the Horror Movie Fiend Club on Facebook! 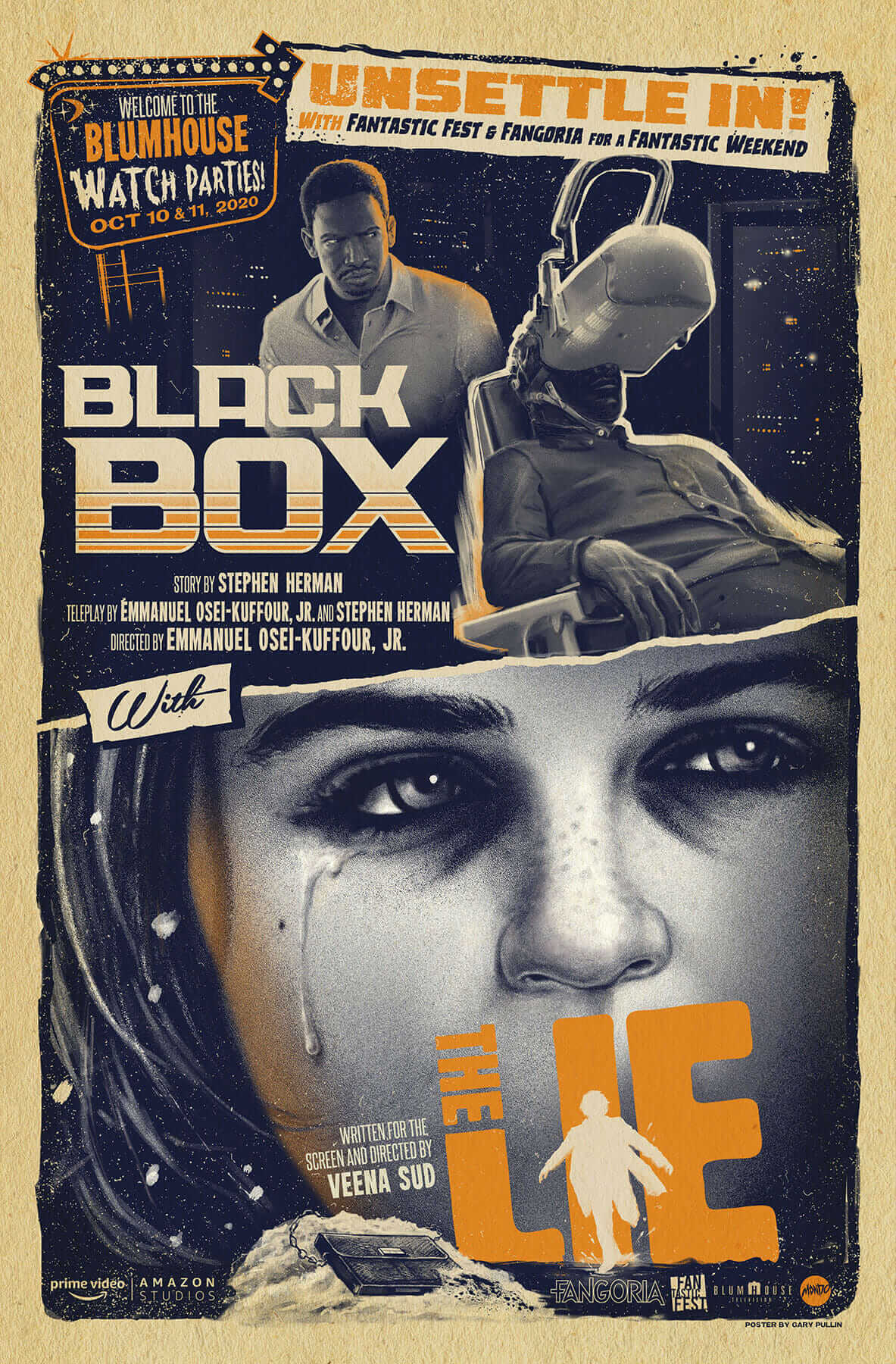