In 2017, audiences around the world were raving about a little film out of Japan called One Cut of the Dead. At first glance, the movie appeared to be yet another grainy micro-budget zombie flick, so viewers entered the film with low expectations. But those who stuck around til the end had their expectations blown out of the water as the camera peels back to reveal a movie within a movie within a movie.

Since then, the movie has become a cult hit, and continues to sit at 100% on Rotten Tomatoes, so it was inevitable that filmmakers in other parts of the world would seek to leech off its success and repackage it for their domestic crowd. Coupez! (or Final Cut in English) is the French remake from Academy Award-winning director Michel Hazanavicius (The Artist). The film opened to a packed theater at this year’s Cannes Film Festival and is now touring the international festival circuit.

“Anyone who loves cinema will enjoy its meta-commentary on the many struggles of filmmaking.”

Coupez! follows the same structure as the original with the first act being about 30 minutes long, all done in one shot. A film crew is attempting to film a low-budget zombie movie in an abandoned facility. However, the unhinged director (Romain Duris, Dans La Brume) is not getting the performance he wants from his lead actress (Matilda Lutz, Revenge) so he calls for a  break. One by one, members of the crew exit the building to go smoke, only to return as the undead. The young actress, along with her co-star (Finnegan Oldfield, Nocturama) and makeup artist (Bérénice Bejo, OSS 117: Cairo, Nest of Spies) must flee from the zombies, with the director in hot pursuit, finally capturing the raw performance he was looking for.

But something seems off from the very beginning. For starters, all the characters have Japanese names, even though the dialogue is all in French. Most of the action feels awkward, and actors speak as if they’re stalling for time and the camera repeatedly lingers on empty shots for too long. It turns out the first act is all part of a live broadcast commissioned by a Japanese producer who oversaw a similar project back in Japan. 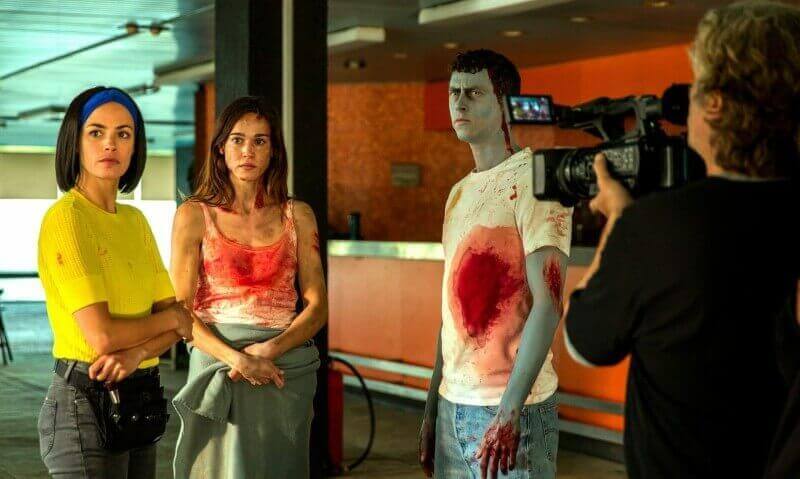 From here, the story goes back in time to a few months before, when struggling filmmaker Rémi (Duris) is tapped to be the live broadcast director. At first, he refuses based on the production’s unusual parameters, but a few days later he agrees in the hopes of impressing his teenage daughter, who has a similar passion for filmmaking. The rest of the movie plays out like a making-of, from the pre-production leading up to the big shoot to the disasters that go down behind the camera during the shoot, giving reason for all the awkward moments.

My first reaction when I heard about the remake was, who the hell asked for this? Isn’t the original enough? Also, isn’t remaking Japanese movies more of an American thing? However, the material is handled with respect. No drastic changes are made. Even the costumes are the same! The story takes place in a universe where the Japanese version also exists. In one scene, Rémi is studying the original broadcast in preparation, wondering how he’s going to pull it off. Somehow many of the same problems that occurred on the set of the Japanese version happen again on the set of the French version (something about not learning from the past and being doomed to repeat it). 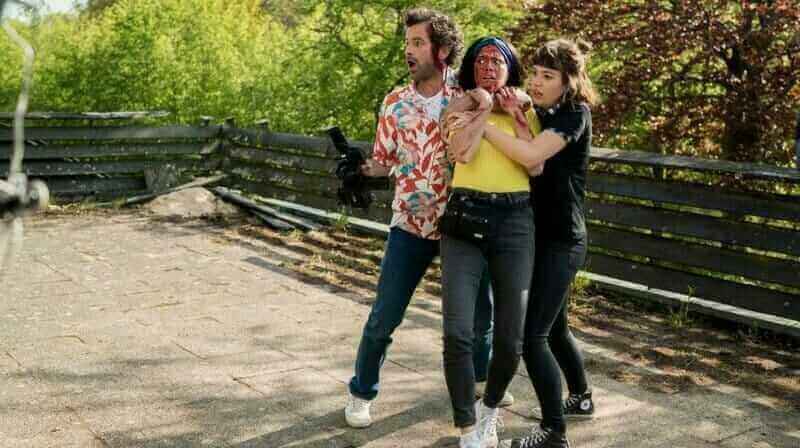 Coupez! doubles down on the more humorous moments of the original. Occasionally, the camera moves faster than the actors, catching them like a deer in the headlights. Having seen the original multiple times before the remake, I recognized each beat of the first act and noticed when a little extra was mixed in. I laughed throughout the screening along with most of the audience though part of me wished I could wipe my memory, just to see if I would have the same reaction. Additionally, Hazanavicius spiced up the script with some French jokes, which don’t exactly translate well into English and might go over the heads of those following along with the subtitles.

The cast is made up of a colorful bunch of characters, all dealing with their own personal issues that add up to the calamity happening behind the scenes. My favorite character would have to be the Japanese producer Madame Matsuda (Yoshiko Takehara), who also appeared in the original. At first, I was worried about who would be cast to play the French equivalent of her character, so I was overjoyed when she first appeared on screen. 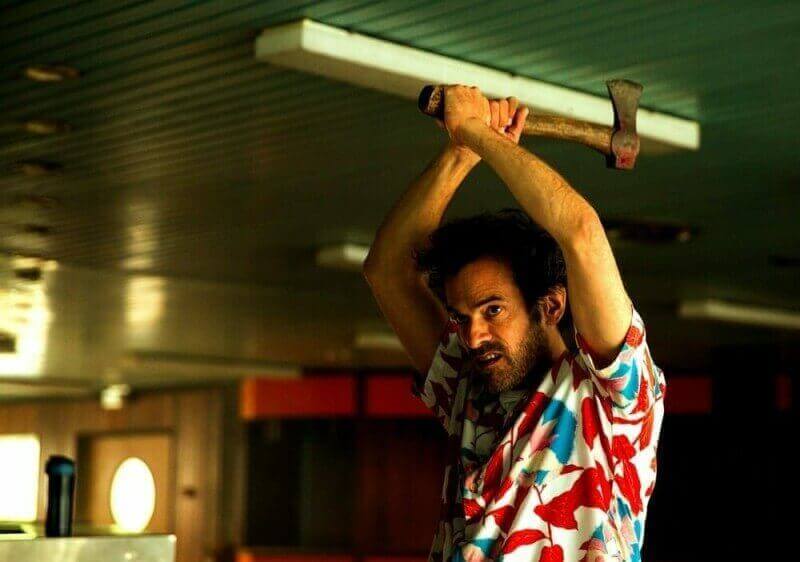 Although small in stature compared to the rest of the cast, Takehara manages to steal every scene she’s in with nothing more than a huge smile. But she is also not to be messed with, and we get to see her shady side when a joke made by Rémi about Pearl Harbor is relayed back to her by her interpreter. Another great source of comedy is the character of Fatih (Jean-Pascal Zadi), who provides the background music and sound effects during the shoot, but often becomes very lost when the cast goes off-script.

Coupez! is a fun watch with a few heartwarming moments near the end. Anyone who loves cinema will enjoy its meta-commentary on the many struggles of filmmaking. However, it doesn’t quite capture lightning in a bottle the same way the Japanese version did, and a bigger budget or cast of recognizable actors will never be able to change that.

“Coupez! is a fun watch with a few heartwarming moments […but] doesn’t quite capture lightning in a bottle the same way the Japanese version did…”

Coupez! celebrated its North American premiere at the 26th edition of the Fantasia Film Festival. Click HERE to follow our continued coverage of the festival and let us know if you’re a fan of the original One Cut of The Dead over on Twitter, Reddit, Facebook, and in the official Nightmare on Film Street Discord. Heck, follow Nightmare on Film Street on TikTok for more horror movie recommendations while you’re at it.

TLDR Coupez! is a fun watch with a few heartwarming moments near the end. Anyone who loves cinema will enjoy its meta-commentary on the many struggles of filmmaking. However, it doesn’t quite capture lightning in a bottle the same way the Japanese version did, and a bigger budget or cast of recognizable actors will never be able to change that.