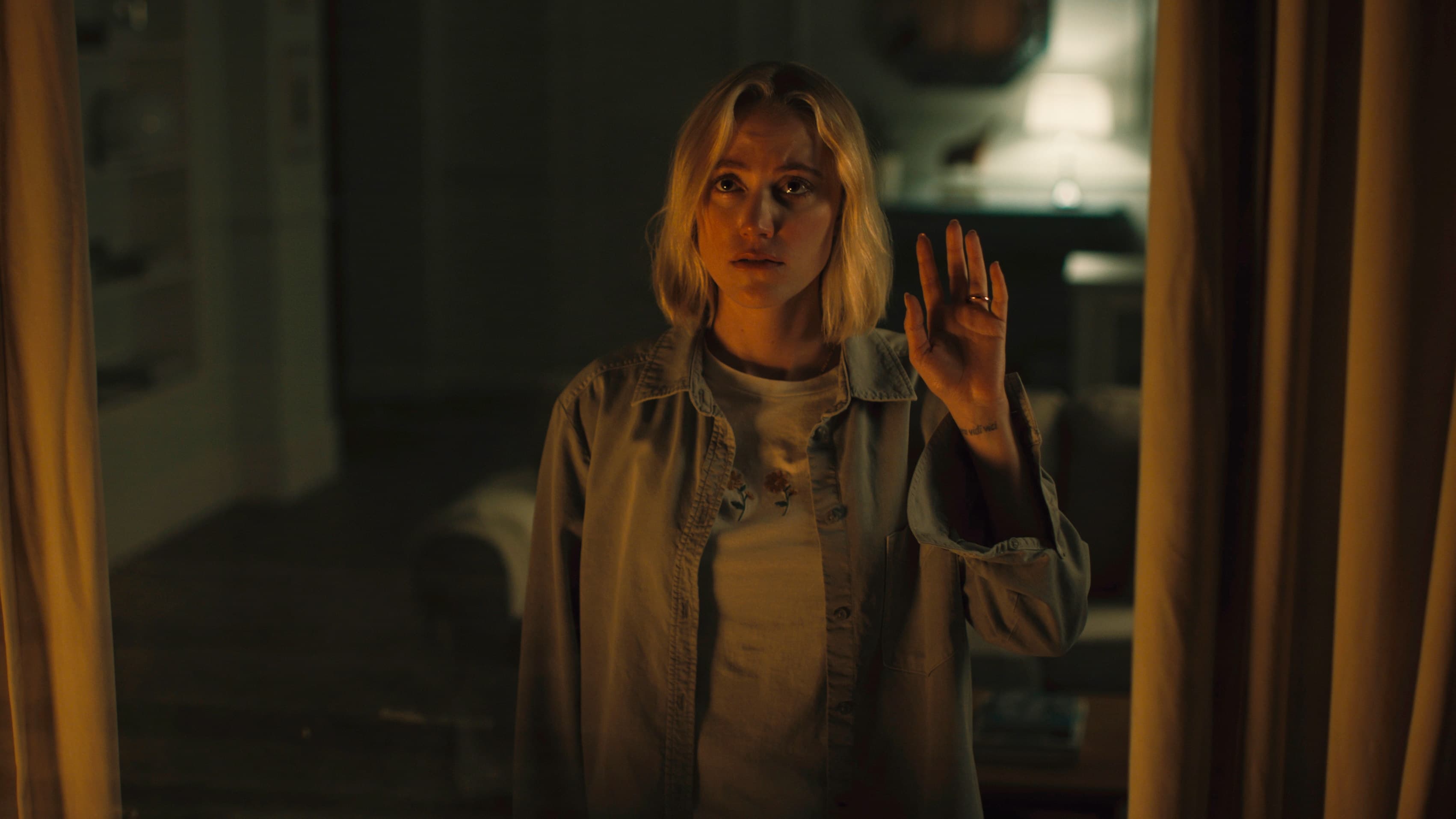 A few months ago the horror community at large was given their first taste of Chloe Okuno’s talents in her V/H/S/94 segment “Storm Drain”. V/H/S/94 was, of course, a found-footage anthology and a far cry from the clean, precise tension of her debut feature Watcher, celebrating its World Premiere at the 2022 Sundance Film Festival.

From a screenplay she co-wrote with Zach Ford, Watcher stars Maika Monroe (It Follows), Karl Glusman (Devs), and Burn Gorman (Crimson Peak). Monroe plays Julia, a fish-out-of-water American transplanted to Romania following a job opportunity for her husband, Francis (Glusman). Her husband, an American as well, was raised to speak Romanian and acts as Julia’s translater. Unfortunately, Francis has been working long hours at his new job, leaving Julia alone to navigate the unfamiliar city streets on her own.

“Thrillers are rarely scary but Watcher never misses an opportunity to put you in a panic.”

The transfer to Bucharest was already off to a rocky start but get really scary when Julia notices the dark shadow of a man watching her from the building across the street. Day and night, he sits at the window just out of sight watching her. And if that isn’t bad enough, there’s a man that’s been following her. Everywhere she goes, she spots him. At the grocery store, sitting behind her in a local movies theatre, down the track of a subway stop: he’s there. As you might suspect, the police are no help and Francis only nods politely until it’s time to go back to work and leave her alone with her overactive imagination.

But is Julia just letting the anxiety of navigating a new city and a stiff language barrier get to her head? Everyone around her seems to think she’s overreacting but it certainly feels like clear and present danger when she’s cornered in a public place by a stranger that keeps popping up in her periphery. And that’s where Watcher really sings. It may be a thriller, but it’s a thriller that puts some of horror’s scariest nightmare sequences to shame.

Okuno has a natural understanding of the scariest place to put the camera so that you are right there with Julia, experiencing these terrifying moments as she did. Those point-of-view glimpses turn these seemingly innocuous moments into living nightmares, as anxiety-inducing as the most heart-racing sequences of Brian DePalma’s Dressed To Kill. On top of that, the crisp sound design of these sequences drops you right into the deep end of Julia’s terror. You won’t find any ghosts or goblins jumping out of the shadows in Watcher. Its frights come by way of a creeping dread that seeps into your bones and reverberates between your ears.

I consider myself a connoisseur of nightmare imagery (translation: I like spooky shit!) and although nightmare sequences don’t always exist in a dream world, the scares hiding in Watcher share the same DNA. Brilliantly photographed and eternally creepy (thanks to two stellar performances from Monroe and Gorman) this thriller is a cat-and-mouse game with life or death consequences. Thrillers are rarely scary but Watcher never misses an opportunity to put you in a panic. As a stand-alone film, it’s a stealthy pulse-pounder but as a debut feature, it’s a really impressive display of Okuno’s talents and her ability to craft genuine terror.

“a stealthy pulse-pounder […] an impressive display of Okuno’s talents and her ability to craft genuine terror. “

Chloe Okuno’s Watcher celebrated its world premiere at the 2022 Sundance Film Festival. Click HERE to follow all of our Sundance 2022 coverage and be sure to let us know how terrified you’d be if you discovered someone staring at you creepily from another apartment building over on Twitter, Reddit, Facebook, and in the official Nightmare on Film Street Discord. Not a social media fan? Get more horror delivered straight to your inbox by joining the Neighbourhood Watch Newsletter.

Review: WATCHER (2022)
TLDR
Thrillers are rarely scary but Watcher never misses an opportunity to put you in a panic. As a stand-alone film, it's a stealthy pulse-pounder but as a debut feature, it's a really impressive display of Okuno's talents and her ability to craft genuine terror.
Story
75
Scares
85
Performances
80
Cinematography
90
82