Haunted houses, nightmare imagery, and ghostly gypsies are on full display in Vincent Grashaw’s eerie slow-burn What Josiah Saw. Divided into four self-contained segments, this farmhouse freakshow features some of the most effective scares I’ve seen all year and a score that is sure to haunt my dreams for nights to come. It’s bound to be a divisive film, but it is a subtlety creepy blend of dream logic and supernatural eeriness for the patient viewer willing to invest a little time to peel back the layers of this haunting tale.

What Josiah Saw, written by Robert Alan Dilts, stars Scott Haze (Venom), Kelli Garner (Lars And The Real Girl), Nick Stahl (Hunter Hunter), and Robert Patrick (Tone-Deaf). It also features quick memorable performances from Tony Hale (Arrested Development), Jake Weber (Dawn of The Dead, 2014), Ronnie Gene Blevins (The Conjuring: The Devil Made Me Do It), and Ben Hall (Climate of The Hunter). Robert Patrick delivers a real standout performance as the abusive patriarch of the Graham family. When we first meet Patrick’s Josiah Graham, he’s little more than a tired old drunk telling farfetched stories about leprechauns. Over time, however, he is revealed to be the long, dark shadow looming over the troubled lives of his children Tommy (Haze), Eli (Stahl), and Mary (Garner).

Eli‘s story comprises nearly the entire 2nd act, and while it initially feels like a dramatic departure from the horror building in the film’s opening, it dovetails back into the main storyline with a run-of-the-mill fortune reading that descends into a hallucinatory nightmare of repressed trauma and bad memories. The detour also showcases one heck of a performance from Stahl as a gambling addict on the run from a lifetime of bad decision-making. In the same way we praise sets and locations as feeling “lived-in”, Stahl’s Eli is pulled from the world’s living library of leather-faced roughnecks. We don’t spend nearly as much time with his counterpart Mary, but her story is a little more economical on time. In just a few short scenes we know exactly what has been haunting her every waking minute, not to mention the most unsettling nightmare sequence I’ve seen all year!

Waiting for them both in the 3rd act is their brother Tommy who has been living alone with their father Josiah. When we first meet Tommy at the beginning of this bizarre tale he’s under his father’s spell, drinking away his sorrow and suffering through the pain of his abuse. The family farm is falling apart and everyone in town believes it to be haunted by Mrs. Graham, who hung herself in an effort to escape her husband. Josiah insists (with an iron fist) that there are no spirits haunting the halls…until the spirits come looking for him in the night. After a visit from his late wife, Josiah is suddenly a new man. Just like that, he’s now a god-fearing Christian, determined to put his house in order. His belief is that their righteous acts might save their mother from the hellfire that consumes her eternally, and only with the cooperation and atonement from his children will they be able to bring her soul peace.

The horror of What Josiah Saw is slow-building and methodical but it’s brought front and center by Robert Pycior’s utterly terrifying score. Fans of Joseph Bishara’s high-anxiety strings in Insidious will especially appreciate the blood-curdling crescendos cooked up for this film’s scares. In some instances, all you see on screen is a scared face reacting to something off-camera, but it’s the cacophony of Pycior’s arrangments that send chills down your spine. That isn’t to say that the scares aren’t as effective without those sinister strings. The scenes that really got under my skin were played out in relative silence, lingering there on screen like a bad dream you can’t escape until shocked awake but the sudden boom of a graveyard orchestra waking the dead.

The twisting nature of this story’s narrative is bound to give some viewers trouble. Even I wasn’t sure exactly what kind of movie I was watching at times, but What Joshia Saw is a f*cking journey. It’s hard to tell just how integral some of the setpieces and rest stops we visit along the way are, but they are all choices that support the film’s unique brand of dreamy danger. What Josiah Saw is a hard movie to classify. At times it is a dark family drama about the lingering nature of abuse. At other times, it’s a straight-up farmhouse ghost story. It has the adventurous wander of a Quentin Tarantino beat sheet but when What Josiah Saw decides that it wants to scare the pants off of you, it’s doesn’t hold back. I am a connoisseur of nightmare sequences and even I don’t see another one before the end of the year, I will have had my fill.

“…a subtlety creepy blend of dream logic and supernatural eeriness for the patient viewer […] when What Josiah Saw decides that it wants to scare the pants off of you, it’s doesn’t hold back.”

Vincent Grashaw’s What Josiah Sawcelebrated its World Premiere at the 2021 Fantasia International Film Festival. Click HERE to follow all of our festival coverage, and be sure to let us know what you would do if you found yourself haunted by the spirit of your dead mother over on Twitter, in the official Nightmare on Film Street Subreddit, and on Facebook in the Horror Movie Fiend Club! 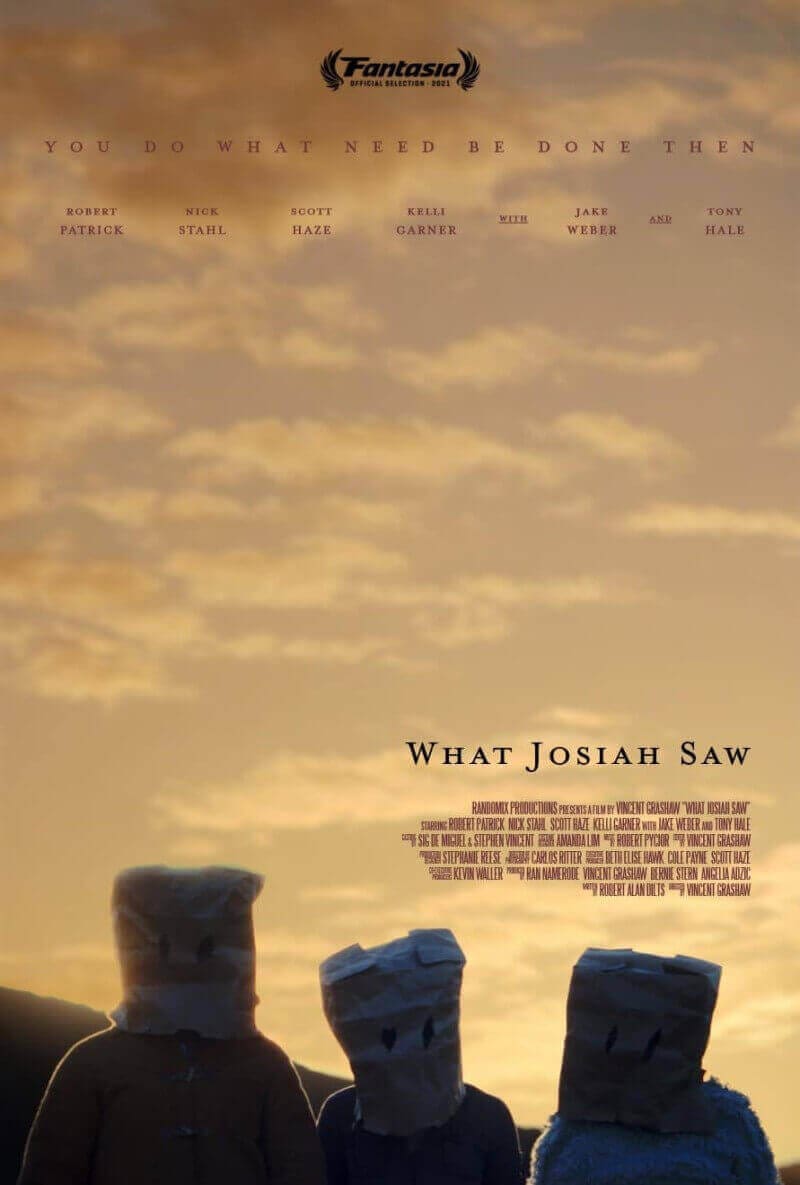 TLDR What Josiah Saw is a hard movie to classify. At times it is a dark family drama about the lingering nature of abuse. At other times, it's a straight-up farmhouse ghost story. It has the adventurous wander of a Quentin Tarantino beat sheet but when What Josiah Saw decides that it wants to scare the pants off of you, it's doesn't hold back. I am a connoisseur of nightmare sequences and even I don't see another one before the end of the year, I will have had my fill.