Agnes is not quite like any other possession movie you’ve likely seen. It follows a lot of the same beats and plays around with the same tropes but it’s uniqueness is in its willingness to dive deep into the life of a character severely impacted by the events of a demon possession. Co-written by Reece and John Selvidge, Agnes stars Ben Hall, Mary Buss, and Ginger Gilmartin who also starred in Reece’s Climate of The Hunter, as well as Jake Horowitz (The Vast of Night), Sean Gunn (Gilmore Girls), Hayley McFarland (The Conjuring), Chris Browning (Bright), and Molly C. Quinn (Castle) who also served as an executive produced. You can read our full review of the film HERE.

I was lucky enough to sit down with Reece and Quinn just ahead of their world online premiere at the 2021 Tribeca Film Festival to talk about the film’s unique quirks, Quinn’s production company Quagmire, and what they each think you should watch after checking out Agnes.

Jonathan Dehaan for Nightmare on Film Street: This is maybe a silly question to ask right up top, but I’ve always been curious, is the nun habit comfortable to wear?

Molly C. Quinn: It’s not a silly question at all. Costumes to me, and this goes for the nun habit, they’re always the last thing to inform a character because you stand different. If you’re doing something in the 50s and it’s tight around your waist, it totally affects your posture. So, the first time I put the habit on, that exactly what it did. It was like, oh okay, now I’m a nun- I have stand up very straight because I have to keep this thing balanced on my head. It was fun. I didn’t feel as pious but I did feel powerful. I felt very powerful and mighty in my habit.

NOFS: So Mickey, where did the inspiration for Agnes come from?

Mickey Reece: For some reason, I knew after- actually, while we were shooting Climate of The Hunter, I was like “well, the next one is gonna be a bunch of nuns,” and no one argued with that. It was just “yes, obviously that’s the next step, of course we have to shoot some nuns”. Inspiration [came] from the nun movies like The Devils and Black Narcissus and stuff, but not really because it ended up being more of a European coming-of-age religious drama looking thing.

So it was basically the imagery that drew me to it and when we were writing the script it was like, “how do you write a script about nuns?”. Well, we could throw an exorcism in there. Me and John Selvidge, my co-writer, [were] just spit-balling everything, and then kind of creating a shift in it because we knew what we had written with that exorcism part, that classic exorcism movie, but then it was like, “well, what happens after that?”. It’s always [about] trying to do something that you haven’t seen before, that I haven’t seen before, or what’s the point in trying to make it, you know? 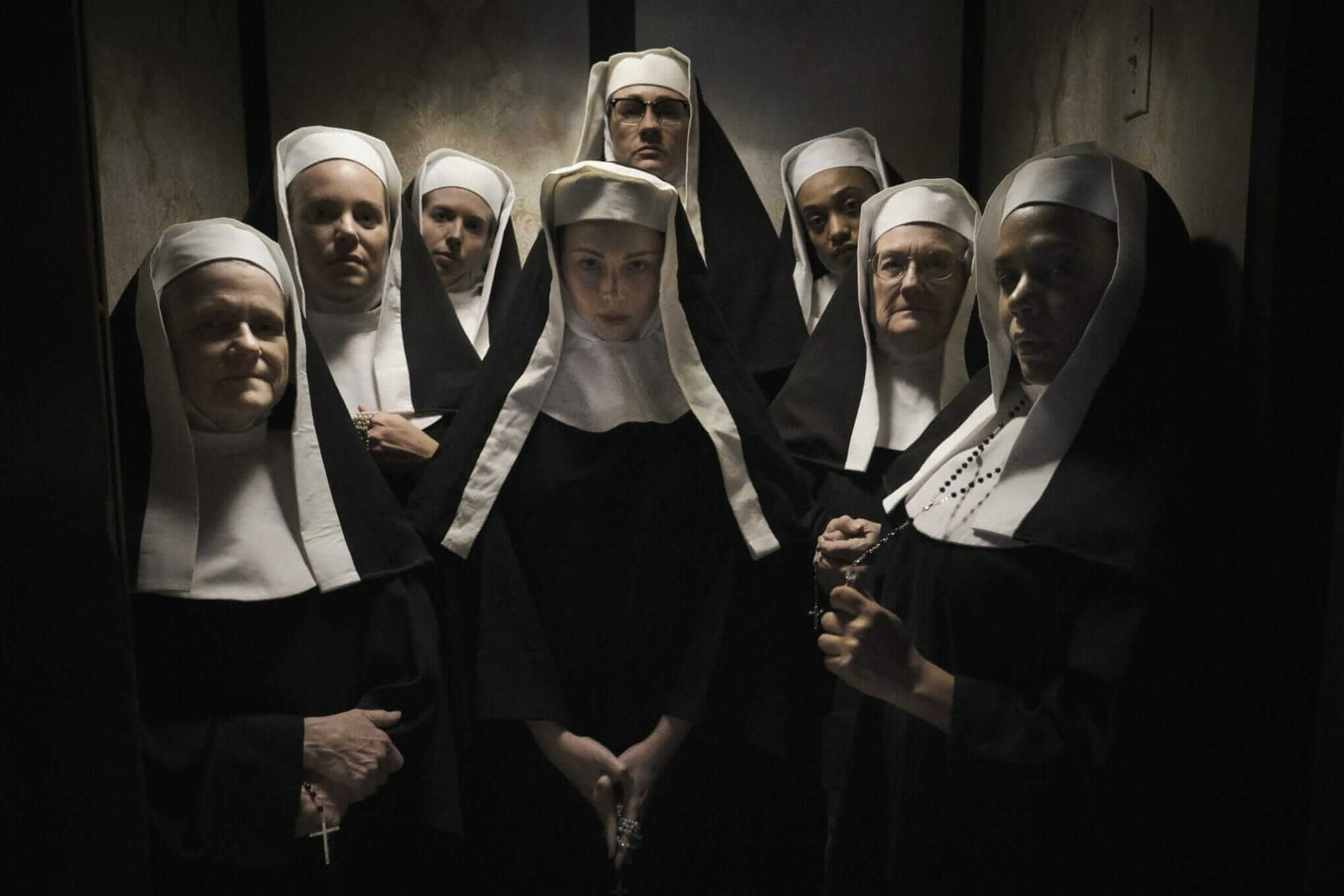 NOFS: And so when you were brought on to the project, Molly, did you know anything about it or was it just “Hey, we’re making a movie about nuns and we think you’d be perfect”?

MCQ: Well, when my production company, Quagmire, was looking for it’s next film we wanted something in the horror space but we wanted something that was just slightly askew. We wanted something that was just a little different. We were talking to our partners over at Divide/Conquer which had just done Climate of The Hunter and they sent us a link and they were like, “We think you’re going to like this guy”. We watched the movie, we were very intrigued and very impressed with what Mickey and his team were able to create. And we loved Ben Hall and Mary Bus– just these really cool actors that you wouldn’t expect. And so, they sent us a very early draft of Agnes and, you know, in the beginning, we were like, “Okay, this is a possession movie. We’ve seen a lot of those,” and then all of a sudden this girl, she out! This character Mary creates a mess and then she does not clean it up, she just leaves, she’s gone.

We were all really fascinated by, how could you pull a move like that off? How could you tell two stories in one movie and try to keep some connective tissue? And then, as an actor, I was just fascinated by wanting to understand Mary’s choices. For me, when I act and the reason I was drawn to it at such an early age is [that] I want to be able to validate someone’s choices. I want to get out of myself and I want to understand why someone makes the choices that they do, and this movie allowed the opportunity for both of those things. An incredible character study in a really great- let’s see, it’s a comedy-horror-character-study. You don’t get to do those a lot.

“Mary is tormented by something. Whether that is a demonic presence or just the terror of real life when you’re running from your trauma.”

NOFS: Yeah! And, you know, it shifts more into the character study halfway through but it looked as emotionally draining as going up to set every day and getting barraged with demons.

MCQ: Oh, yeah, my heart rate was elevated every day, It was like I was running a marathon because, for me, Mary is tormented by something. Whether that is a demonic presence or just the terror of real life when you’re running from your trauma. Both of those things can be very real depending on who’s watching the movie, which is also what I loved about it. It’s a very individual journey based on who’s watching it.

NOFS: Mickey, I’m really fascinated how early on you knew you were going to put a dividing line down the middle of the film. Was it a surprise to you how deep you eventually dove into Mary’s crisis of faith in the second half of the film?

MR: It was outlined, but the outline doesn’t necessarily tell you what specific themes are going to be pronounced. The outline is more just kind of the structure of scenes that happen. John Selvidge and I talk a lot about everything. We talk about every single avenue that a character can go through and after we’ve written some, just kind of define what every piece is and if there’s something that’s too heavy-handed or too metaphorical we figure out a way to brush that off or to make it a little more ambiguous. So I think a lot of the stuff that we talk about still goes into the script somehow through some other way without having to be obvious about it.

NOFS: I’m also really curious about all the humor that gets injected into your stuff. Is it also just you throwing ideas around and anything that makes you laugh stays.

NOFS: Molly, you mentioned that your production company Quagmire wanted to venture into the horror. Is that a space that you’ll be exploring more? are you a horror fan yourself?

MCQ: Horror is my favorite genre. Last night I watched The Conjuring: The Devil Made Me Do It and the night before that I watched Spiral, I’m going to watch The Possession again tonight. We’re obsessed with horror. I like being nervous and I like being anxious, and I like watching people that are just people having to deal with extraordinary circumstances. It really gets something in me. So yes, we plan on continuing to make horror films and I’ll be a horror fan forever, it’s just such an amazing genre. All-day today I was thinking about this from the Uk called Possum. All-day, for whatever reason, I’ve just been thinking about Possum and how unsettling that movie is.

“…we plan on continuing to make horror films and I’ll be a horror fan forever, it’s just such an amazing genre.”

NOFS: If anyone wanted to put together their own double or triple bill at home after their Tribeca screening, what movie would each pair with Agnes?

MCQ: Oh my gosh, I think I would say- you know what, let’s be fun here. I would say watch Persona first and then watch Agnes. Then, I would say, follow Agnes with Saint Maud and then Possum.

NOFS: Dang, that’s a whole film festival in itself! And what would pair Mickey?

Mickey Reece’s Agnes celebrated it’s World Premiere it’s World Premiere at the 2021 Tribeca Film Festival. Click HERE to follow our full coverage of the festival and be sure to let us know what you thought of the film over on Twitter, Reddit, Facebook, and in the official Nightmare on Film Street Discord. Not a social media fan? Get more horror delivered straight to your inbox by joining the Neighbourhood Watch Newsletter. 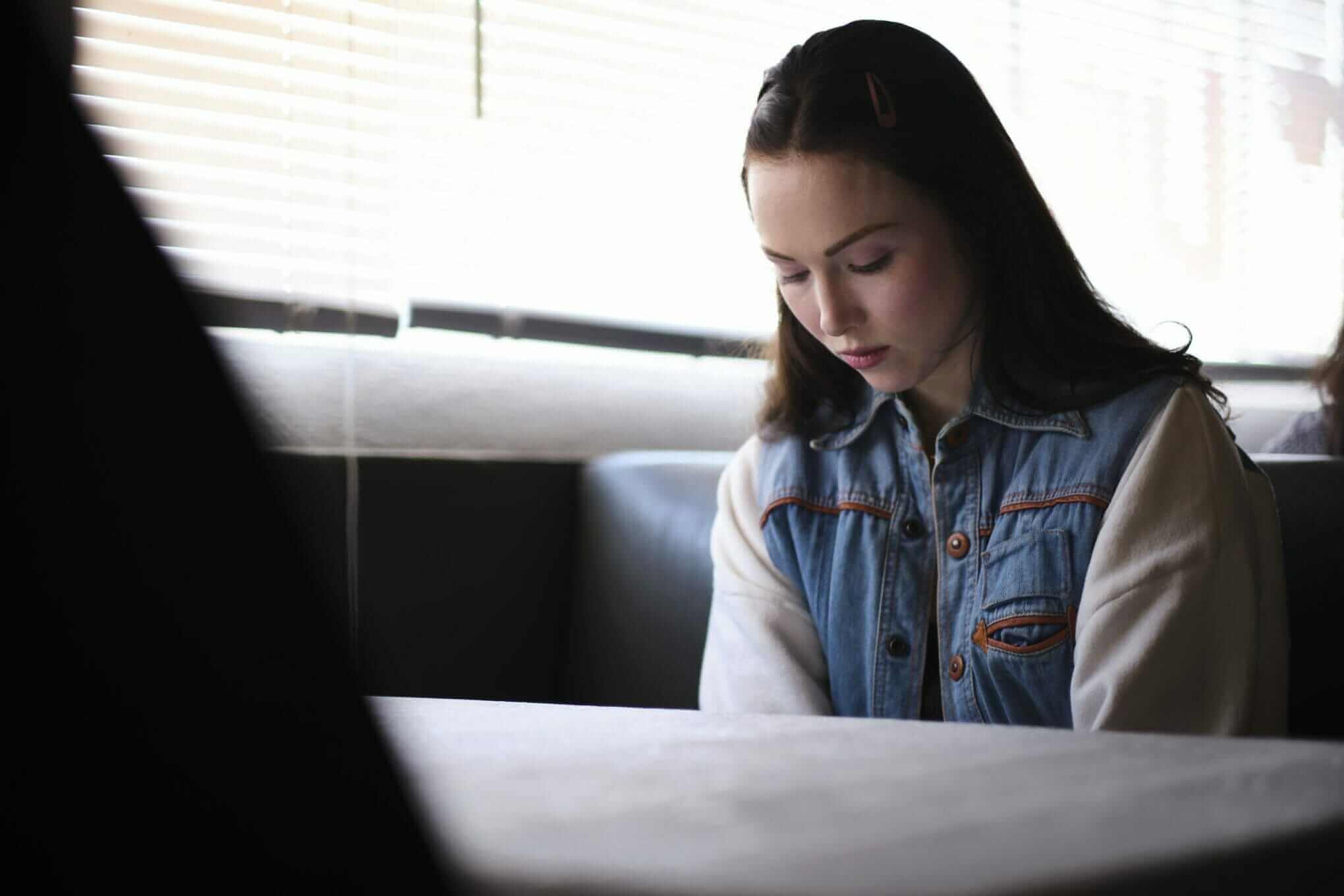