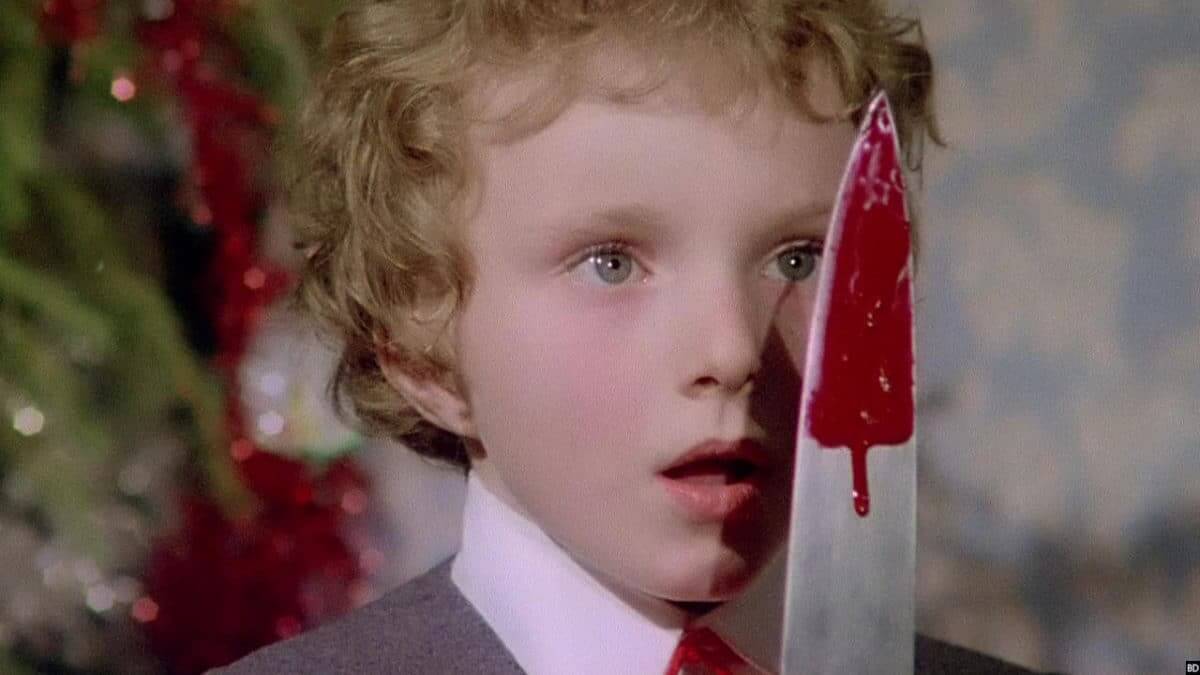 There is no better time to watch a killer Santa slashing his way through The Naughty List than mid-December with Christmas lurking right around the corner. It makes as much sense as watching The Texas Chainsaw Massacre on a hot August day or popping in a VHS copy of Halloween while carving pumpkins in October. But what do you do once you’ve binged the entire Silent Night, Deadly Night franchise? What are you supposed to watch after Black Christmas and Christmas Evil and Christmas Bloody Christmas?

Below are 10 Scary Movies That You Forgot Were Christmas Movies! You might not find any of these movies on your average Holiday Horror list but these are all bonafide yuletide scares. Admittedly, my criteria for what makes a movie a “Christmas Movie” is very lax. As far as I’m concerned, you just need one scene with a Christmas tree in the background to secure a spot in my holiday horror compendium. That’s enough Christmas for a Grinch like me. 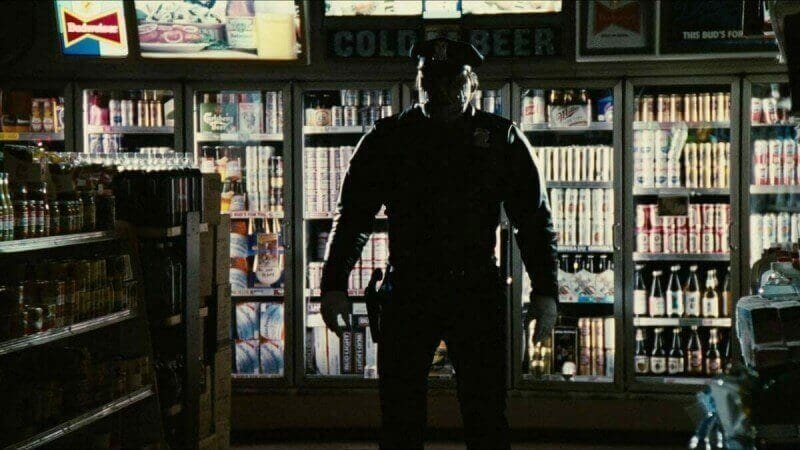 A supernatural maniac killer cop teams up with a Times Square serial killer.

Listeners of the Nightmare on Film Street podcast won’t be surprised to see this bombastic supernatural slasher at the top of this list. We gushed at length on a recent episode and of all the movies on this list, Maniac Cop 2 is the most Christmasy. Crooked cops roasting on an open fire, traffic officers turned into fleshy hanging ornaments, last-minute chainsaw shopping for that special someone- Maniac Cop 2 has more Holiday Horror than you can shake a dead reindeer at. 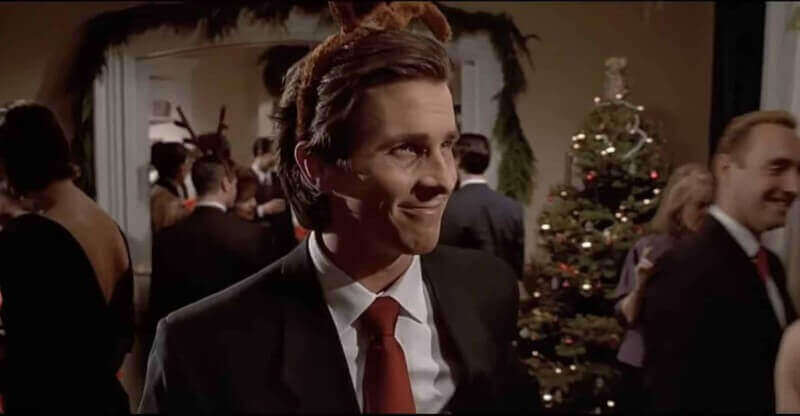 A wealthy New York investment banking executive hides his alternate psychopathic ego from his co-workers and friends as he escalates deeper into his illogical, gratuitous fantasies.

American Psycho may not be the first movie that jumps to mind when you think of the Holidays but if you’re feeling extra cynical and ready to explode thinking about the materialism and greed hiding just beneath the surface of the gift-giving season, Christian Bale’s Patrick Bateman is here to help you ba-humbug the night away. And let’s not forget that this movie also features a hilarious high-society Christmas party where someone sneaks a pair of reindeer antlers onto Patrick Bateman’s perfect yuppie slickback hairdo.

A musician witnesses the murder of a famous psychic, and then teams up with a fiesty reporter to find the killer while evading attempts on their lives by the unseen killer bent on keeping a dark secret buried.

Perfect for any horror fan looking to escape the overtly Christmasy flicks, Dario Argento’s Deep Red is still technically a Christmas movie. Buried in the middle of this synth-laden Italian classic is a cold-blooded Christmas murder. As is the case with so many Giallo films, the motivation of the killer lies in deep psychological scars and, unfortunately, trauma is the dark gift that keeps on giving. If you like your ornaments and decorations a rich (possibly blood-splattered) crimson red, Deep Red is the secret Holiday Horror for you. 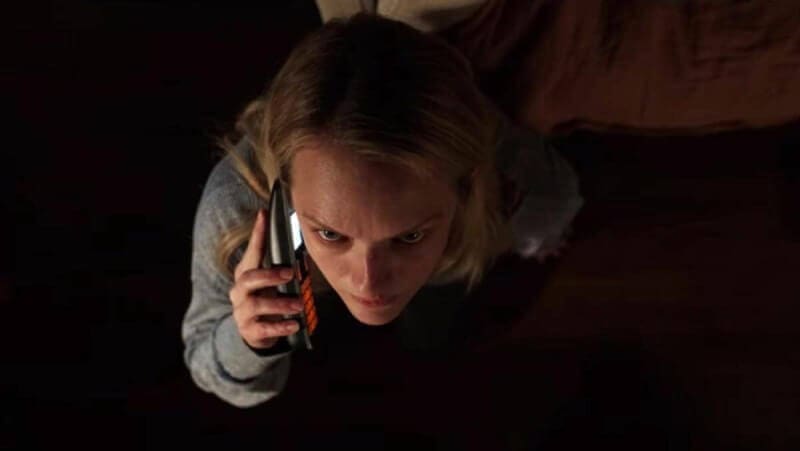 When Cecilia’s abusive ex takes his own life and leaves her his fortune, she suspects his death was a hoax. As a series of coincidences turn lethal, Cecilia works to prove that she is being hunted by someone nobody can see.

Yep. Leigh Whannell’s The Invisible Man is a Christmas movie. We all forgot that immediately leaving the theatre cause it also boasted some of the year’s most subtly unnerving moments, but it’s a Christmas movie alright. Don’t believe me? Well, you might have forgotten a pivotal scene where Elizabeth Moss’ Cecilia learns that her abusive husband has committed suicide, leaving her a small fortune. As a thank you for allowing her to stay with them, Cecilia delivers some early Christmas gifts to her friend James (Aldis Hodge) and his daughter Sydney (Storm Reid). The holiday cheer doesn’t last for long, however, when the trio is terrorized by an invisible attacker hellbent on destroying their lives. 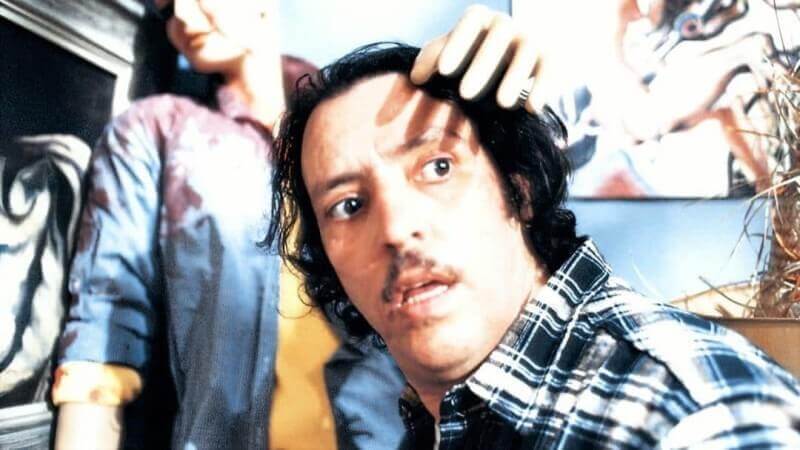 A psychotic man, troubled by his childhood abuse, loose in NYC, kills young women and takes their scalps as trophies. Will he find the perfect woman in photographer Anna, and end his killing spree?

The second William Lustig film on this list, Maniac is one of Holiday Horror’s best-kept secrets. Somewhere between the grim, gritty murder setpieces and Joe Spinell’s sweaty performance, we all forgot this was a snow-speckled serial killer story. Look beyond the brutal, hopeless killings and the brilliantly disgusting practical effects and you might notice Frank talking a neighbor carrying home a Christmas tree. Heck, he even takes his date to meet his Ma…at a secluded graveyard.

Karen, a single mother, gifts her son Andy a Buddi doll for his birthday, unaware of its more sinister nature. A contemporary re-imagining of the 1988 horror classic.

Child’s Play (2019) was met with a less-than-positive reception by diehard Chucky fans. At the time, the horror audience couldn’t get over this funky remix of the celebrated classic which is a real shame because it’s a wild ride. No one will ever be able to top Brad Dourif’s performance as the iconic Good-Guy-Doll-Turned-Supernatural-Pint-Sized-Murderer but if you can check your baggage at the door and look past your own misgivings, you’ll find that Child’s Play (2019) packs a gory, holiday-themed punch. 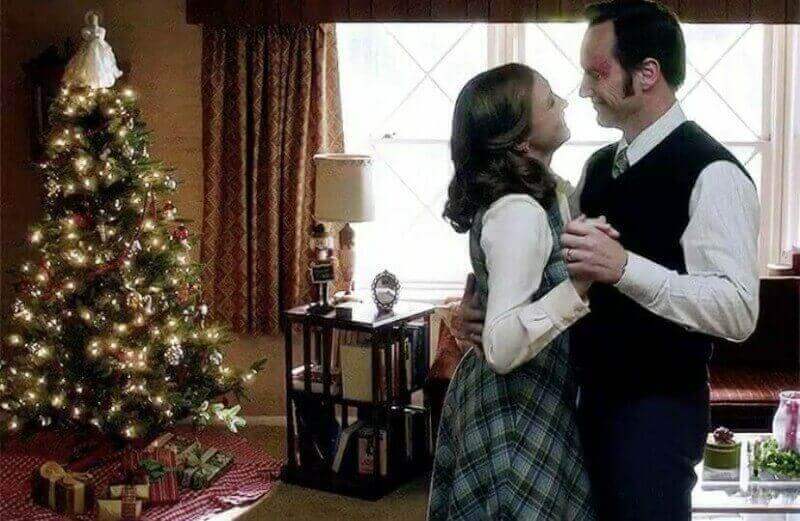 What’s a good Christmas story without a few ghosts? Unfortunately for the Warrens and the Enfields, these ghosts of Christmas past aren’t hanging around to remind everyone of how good they used to have it. These holiday spirits have dark intentions and want nothing more than to tear apart these god-fearing Christian folk during their most cherished time of year. It also features a sweet little dance number between Ed & Lorraine Warren (Patrick Wilson & Vera Farmiga) who come together again for a romantic moment under the mistletoe.

The Weather Outside is Frightful: The 7 Best Bloody Horror Movies Set in Snow 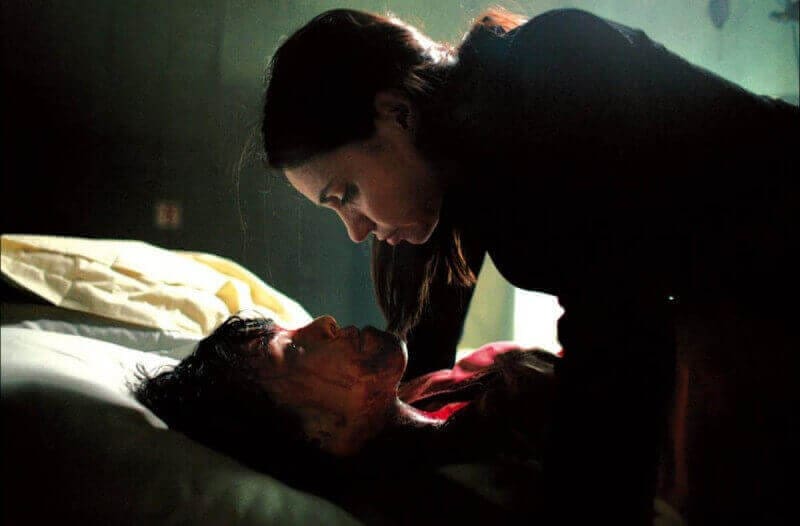 Four months after the death of her husband, a woman on the brink of motherhood is tormented in her home by a strange woman who wants her unborn baby.

If the sweet, tender charm of two religious lovers is too much for you to stomach then, good news, you’ll find none of it in Alexandre Bustillo & Julien Maury’s Inside (À l’intérieur). One of the early films in the “French Extremity” movement, Inside features brutal, unrelenting violence. I mean, the premise alone is enough to raise a few eyebrows, and let’s just say it does not take long before the mysterious home-invading woman tries to cut open a defenseless woman’s pregnant belly with a pair of scissors. Which is probably exactly why most people forget that this movie takes place over one very long, very graphic Christmas Eve. For certified Scrooges only. 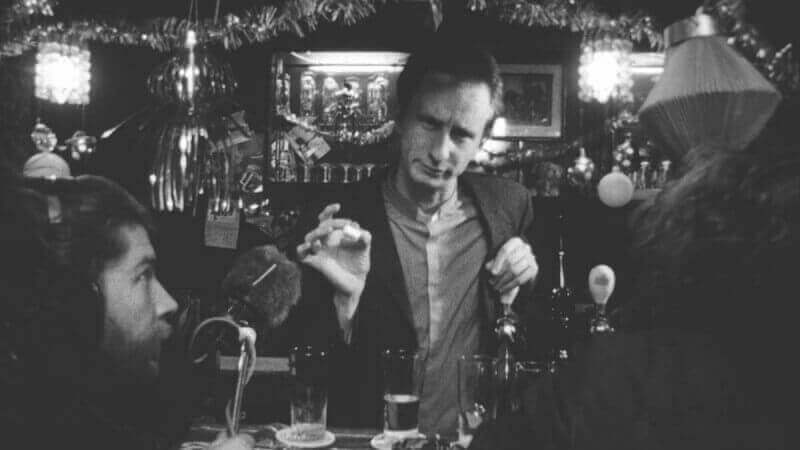 The activities of rampaging, indiscriminate serial killer Ben are recorded by a willingly complicit documentary team, who eventually become his accomplices and active participants. Ben provides casual commentary on the nature of his work and arbitrary musings on topics of interest to him, such as music or the conditions of low-income housing, and even goes so far as to introduce the documentary crew to his family. But their reckless indulgences soon get the better of them.

Some of us have visions of sugarplums dancing in our heads during our long winter nap. Others dream of headless corpses, and disemboweled victims. Man Bites Dog (C’est arrivé près de chez vous) is an early found footage mockumentary and it’s just as grim and unflinching today as it was back in the 90s. It’s as much a satire on violence in media as it is a pitch-black slice-of-life character study about a serial killer. One of the film’s most brutal scenes takes place during the holidays when Ben (Benoît Poelvoorde) and the film crew spend the night drinking together before breaking into a couple’s apartment for an unrelenting night of bleak horror.
In case of emergency, remember that your Santa stockings can always be used as a barf bag. 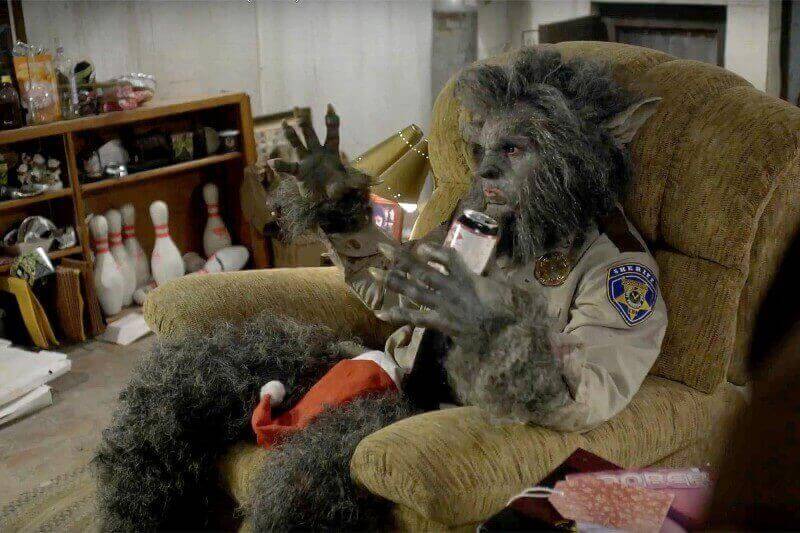 An alcoholic cop experiences blackouts and starts turning into a werewolf when the full moon appears in the sky.

If Inside and Man Bites Dog were a little too much for ya, why not take a light-hearted break with a goofy, modern grindhouse werewolf flick. Certainly the stupidest movie on the list, Another Wolfcop is a laugh-out-loud action/horror/sci-fi hybrid with alien creatures, bullet-riddled car chases, and werewolf sex! It’s pure nonsense from start to finish, and it’s certainly the only Christmas movie with a werewolf that uses a Santa hat to cover his big wolf d*ck. Hairy Christmas to all, and to all a good bite.

What are your favorite secret Christmas Horror movies? I’ve got a whole list of holiday-adjacent genre flicks loaded with action, horror, comedy, and crime goodies for all the ghoul boys and girls on Letterboxd if you want even more grinchy recommendations. But please, share your favorite secret Christmas faves with us over on Twitter, Reddit, Facebook, and in the official Nightmare on Film Street Discord. Heck, follow Nightmare on Film Street on TikTok for more horror movie recommendations while you’re at it.